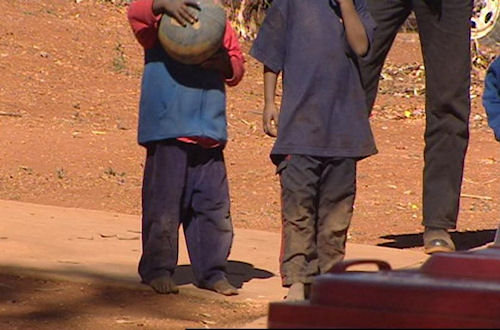 July 31 – Alaska Natives try to halt proposed Pebble Mine – A coalition of village corporations and others files suit to put an end to drilling and exploration for a copper and gold mine above Bristol Bay — a sanctuary for wild salmon.

July 31 – Persecution of Indigenous Leaders Continues in Peru – The UN Special Rapporteur has called for an immediate review of legal charges against all indigenous leaders, who the government is attempting to blame for last month’s violent assault in Bagua. Police are currently preparing to arrest one of those leaders, Santiago Manuin Valera. Manuin was shot 8 times as he approached Peruvian special police forces last month, attempting to negotiate a peaceful resolution to the violence. (sign a petition denouncing the persecution of Amazonian indigenous leaders)

July 30 – Borneo tribe mounts new blockades against rainforest destruction – Dozens of Penan tribespeople armed with blowpipes and spears have erected blockades across the roads cut by logging companies deep into their forest in Borneo. The blockaders are calling for an end to logging on their land.

July 30 – Grand Canyon’s ‘guardians’ press for protections – As the “guardians of the Grand Canyon,” we strenuously object to mining for uranium here. It is a threat to the health of our environment and tribe, our tourism-based economy, and our religion.

July 30 – Vedanta to go ahead with mining sacred Orissa hill – British mining giant Vedanta said on Tuesday it is going ahead with plans to mine a bauxite-rich hillside in Orissa considered sacred land by local tribals, and urged two international NGOs to give up their protest campaign.

July 29 – Six Nations concerns over Edwards landfill – A delegation from the Hoskanigetah (Six Nations Men’s Fire of the Grand River) warns about the possible re-opening of the Edwards landfill, just outside of Cayuga, Ontario. Members from the Six Nations community have been working for years, alongside the non-native environmental coalition, HALT (Haldimand Against Land Transfers), to make sure no more waste is added to the dump.

July 29 – We are NOT A THREAT to the Oil Industry – Here, a statement by Mike Mercredi from the Athabasca Chipewyan First Nation, on the newly-released, roughshod of a report: Resource Industries and Security Issues in Northern Alberta, by the Canadian Defense Security and Foreign Affairs Institute (CDFAI). The report preposterously claims that indigenous people in Northern Alberta are one of the highest threats to Canada’s burgeoning oil industry.

July 28 – Brazilian judge orders illegal settlers off Awa lands – A Brazilian federal judge has ruled that ranchers and colonists illegally occupying the Awá Indian reserve must leave the territory within 180 days. This is a major victory for the tiny nomadic hunter-gatherer tribe of 300 people in Maranhão state.

July 28 – Boycott Denison Mines – Toronto-based Denison Mines (International Uranium Corporation) is threatening to reopen Canyon mine and drill for uranium at the south rim of the Grand Canyon. It only takes a quick look at the company to see that it has targeted Indigenous Peoples around the world with mining, poison and death.
Denison uranium mines and explorations are in White Mesa, Utah, McClean Lake in Saskatchewan, Australia, Mongolia and the Mutanga Project in Zambia.

July 24 – Indigenous Communities Angered by Peru Environment Minister – Indigenous communities from the Peruvian Amazon are angry over recent comments from Peru’s environment minister that Pluspetrol’s Lote 8 on the Corrientes river, is a “shining example” of how oil projects can benefit local communities. The only thing “shining” in Lote 8, as evidenced in the attached photograph, is coming from the four major oil spills that have occurred in the region, just this year.

July 23 – Ampilatwatja elders threaten to abandon community – A group of 30 indigenous elders and leaders from Ampilatwatja, in Australia’s Northern Territory, have said they will soon abandon their community unless the government starts listening to them. The group says that the intervention has brought nothing but shame and misery to their lives, leaving with no choice but to build a new community for themselves.

July 21 – Mexico: Nahuas win land struggle – On July 17 Michoacán governance secretary Fidel Calderón Torreblanca and the Nahuas’ legal adviser, Carlos González García, reached an agreement in which the Nahuas would receive land in compensation for grievances dating back some 45 years, when their land was taken from therm.

July 17 – All-of-a-sudden cleanup for the world’s Cold War waste – A bit of curious timing, 3 byproducts of the cold war are getting long-needed remediation: More than 800 million tons of uranium waste in Kyrgyzstan, a series of radar sites in Canada, and ‘some’ of the more uranium-contaminated sites on Navajoland, America.

July 16 – Land Grabs threaten 20 million hectares throughout Africa – A land grab, motivated by speculators, is threatening several African countries. The United Nations’ estimates that some 20 million hectares is currently – or about to be – under lease to foreign companies operating in Sudan, Tanzania, Cameroon, Ethiopia, Madagascar, Ghana, Kenya and Zambia.

July 13 – Loggers arrested after invading uncontacted tribes’ land – Eighteen illegal loggers have been arrested on land inhabited by uncontacted Indians in Ecuador, according to the El Comercio newspaper. The arrests were made over the last few weeks, after the loggers were found by patrols cutting valuable cedar trees.

July 9 – Tanzania Government bans water use near Barrick mine – The Tanzania government has banned the use of water from the Tigithe River, which may be contaminated with Sulphiric acid used by the Canadian company Barrick Gold at their North Mara Gold Mine in the Tarime discrict.

July 8 – Secretive Russia-Burma mine could displace thousands – A Russian-backed mining project in Burma’s war-torn Shan State will permanently destroy the homes and farmlands of 7,000 Pa-O villagers, according to a new report by the Pa-O Youth Organization (PYO).

July 8 – Sarawak Government ignores land rights ruling – The government of the Malaysian state of Sarawak is ignoring a recent court ruling recognizing the rights of the Penan and other tribes to their land, according to a leading Sarawak indigenous rights lawyer.

July 1 – Interview: Victory Over Mexico’s La Parota Dam – Since 2004, thousands of Mexican farmers have been fighting the construction of La Parota Dam in the state of Guerrero. They have staged blockades, protests and legal actions and have faced violent police repression in return. In May, the Mexican press reported that the government would postpone La Parota Dam until after 2018. World Rivers Review interviewed Rodolfo Chavez Galindo, a leader of the vibrant movement to stop the dams, about the battle over La Parota.

July 1 – Guatemala village blocking illegal garbage on their land – Neighbors of Pajopom Village from Esquipulas Palo Gordo don´t want trash from San Marcos anymore. From June 15th 2009 they have prevent the discharge of garbage in an illegal garbage dump in their community by having a pacific protest in front of the community saloon.

Destruction of the Abatwa (Pygmy) Culture – “The Abatwa are an example of the phenomenon feared by Subcomandante Marcos and the indigenous communities of the Chiapas region of Mexico, that of being so marginalized as a people that you just don’t matter any more.”

Interview with Grandma Aggie from the 13 Indigenous Grandmothers – The eldest living member of her tribe, the Takelma Indians of southwest Oregon, Agnes Baker-Pilgrim is a world-renowned spiritual leader, spokesperson and member of the International Council of Thirteen Indigenous Grandmothers, and keeper of the Sacred Salmon Ceremony—a tradition that she revived for her people after 150 years.