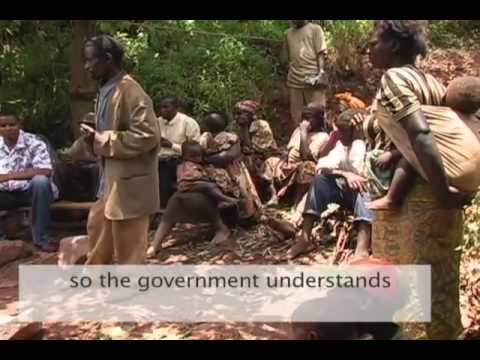 Destruction of the Abatwa (Pygmy) Culture

“The Abatwa are an example of the phenomenon feared by Subcomandante Marcos and the indigenous communities of the Chiapas region of Mexico, that of being so marginalized as a people that you just don’t matter any more.”

The Destruction of the Abatwa (Pygmie) Culture, produced for the 28-minute weekly cable public access program Indymedia Presents, takes a look at the largely-unnoticed struggle of the Abatwa People, more commonly known as the Pygmies.

Modern Abatwa life is a far cry from the past, when they were respected for being highly skilled traditional hunters. Today the Abatwa they have been so completely marginalized it’s like they do not exist.

This has been especially the case since 1973, when the Abatwa were thrown off their lands for an animal preserve. “The unintended consequence of the environmental victory was great destruction to Abatwa culture, and the loss of many lives.”

21 years later, the British Empire’s historical interference in Rwandan culture triggered a genocide of the Tutsi by the Hutu. As we watched on in terror, as many as 1,000,000 people were killed.

Nobody ever seemed to notice that the Abatwa were among them. Even now, few have ever reported that they were also targeted by the Hutu. The few reports that do exist, estimate between 10,000 and 30,000 Abatwa died during the months-long genocide. These are the forgotten victims.

Not much has changed since then. With fears occasionally rising that the genocide could happen again, the Abatwa find themselves being dragged to extinction. They are losing one percent of their population each year, and miscarriages are frequent because the Abatwa’s health is so extremely low and they have little or no access to aid, medicine, or social supports.

Some groups doing their best to help, like Caurwa and the Health Development Initiative – but even so, the Abatwa’s struggle for life is a losing one.

The Destruction of the Abatwa (Pygmie) Culture is the second in a series of films by Patricia Boiko from Pepperspray Productions. The first program examined the genocide in Rwanda, and how people can heal from such wanton horror.