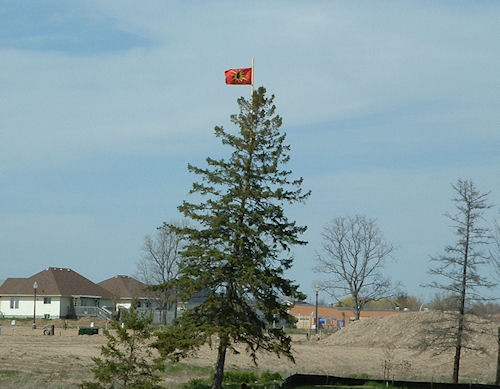 19 years later: On the Fraudulent theft of Mohawk Land

While the “Oka Crisis” has been long buried by most Canadians, the Fraudulent theft of land that led to it remains completely unresolved, as Ellen Gabriel from the Mohawk community of Kanehsatake illustrates in this press release.

Issued to mark the “Oka Crisis”— which began exactly 19 years ago today, on July 11, 1990–Garbiel outlines a set of “required” recommendations for the government to reconcile it’s long history of fraud against the Mohawk People.

To learn more about the events surrounding Oka, see: Kanehsatake: 270 Years of Resistance.

Fraudulent theft of Mohawk Land by the Municipality of Oka

It has now been 19 years since the “Oka Crisis” when the Municipality of Oka, developers, in collusion with the Federal and provincial governments attempted to defraud the Mohawk peoples of Kanehsatà:ke of our ancestral Pines to make way for the expansion of a 9 hole golf course and a condominium development.

19 years later, nothing has changed as the Municipality of Oka with the approval of federal government, continues to defraud Mohawk peoples of our land and its resources through housing developments, the nationalizing of Oka Park and through the Kanesatake Interim Land Base Governance Act (KILBGA).

Since June 6, 2008, I have written 3 letters to the Municipality of Oka, with the inclusion of both the federal and provincial governments as well as the Governor General of Canada: Michaëlle Jean, regarding my concerns of the fraud being committed by the Municipality of Oka and developers. To date I have not received any response from any level of government or individual.

The issue that sparked the Crisis of 1990 was the blatant theft of our homelands, the Mohawk peoples’ sovereignty over those lands and the continued efforts by governments to undermine and defraud us of our international human rights to our homelands.

The acceleration of development since 1990 is astounding and has exploited the hardship and violations of human rights that the Mohawk peoples and their allies suffered during the Crisis of 1990. In fact, no level of government, in particular the Municipality of Oka, has apologized for the blatant human rights violations, which included the denial of food, medicine and safety of the Mohawk peoples. Mohawk men were beaten and tortured by the Sureté du Québec and members of the Canadian Army. Mid August 1990, Kahnawake community members were assaulted with stones when they tried to leave their community via the Mercier Bridge while the SQ stood idly by. Mohawk effigies were burned nightly by racist citizens in Chateauguay who refused to understand that the blocking of the Mercier Bridge protected the community of Kanehsatà:ke from a police and army attack. To date, the Governments of Canada and Quebec, the Sureté du Québec and the Municipality of Oka have yet to apologize for their casual disregard of human rights violations during the 1990 Oka Crisis.

The Mohawk peoples have been waiting for over 300 years for a peace that never seems to come. A peace blocked by arrogant, racist governments and their forced assimilation policies concealing their coveting of our lands and resources through their legislation.

And so in the past 19 years, what has changed? It is evident that very little has changed and that there is a continuation to defraud not just the Mohawk peoples of Kanehsatà:ke of our lands and access to those resources, but all Indigenous peoples living in Canada. Therefore the following recommendations are being put forward to the Government of Canada and those levels of government that fall under its jurisdiction:

2. that the Kanesatake Interim Land Base Governance Act (KILBGA) be rescinded as the validity of the process is questionable and adversely affects the rights of the Kanienkehá:ka peoples

3. Furthermore, that a legal review be conducted by an international human rights tribunal on the process used by Canada to pass S-24 and that Canada pay for the cost of the tribunal

4. that the Kanienkehá:ka (Mohawk) nation, and in particular the community of Kanehstatà:ke, be accorded the time to begin the process of a strategic plan that will protect our lands and its resources for future generations.

5. that a process begins to create a policy for the approval of development by the traditional government of the Iroquois confederacy on our territories.

6. that an apology for the human rights abuses and all propaganda criminalizing the Mohawk people be given by the Canadian Government, the Government of Quebec and the Municipality of Oka as quickly as possible in order to begin the process of reconciliation.

7. that an environmentally friendly sustainable development program be implemented throughout Kanienkehá:ka (Mohawk) Territory.

8. that Government of Canada implement the norm of free, prior and informed consent for any policy, legislation or development that has the potential to adversely affect the rights of all Indigenous peoples in Canada.

9. that the Government of Canada be accountable for the money it holds in trust for Indigenous peoples, including the Six Nations Trust Fund, and that this accountability be made public in an honest and transparent manner

These are only a few of the necessary recommendations required for the process of reconciliation and for the rule of law to be respected by the Government of Canada. Nothing short of this disavows the honor of the Crown.