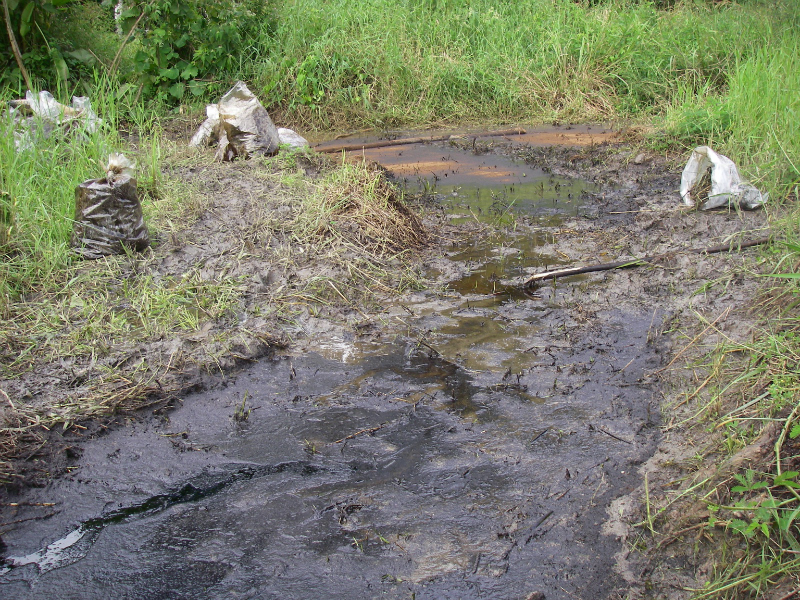 Indigenous communities from the Peruvian Amazon are angry over recent comments from Peru’s environment minister that Pluspetrol’s Lote 8 on the Corrientes river, is a “shining example” of how oil projects can benefit local communities.

The only thing “shining” in Lote 8, as evidenced in the photograph attached, is coming from the four major oil spills that have occurred in the region, just this year.

The spills were witnessed by FECONACO, the Federation of Native Communities of the Corrientes, who runs an environmental monitoring project in Corrientes.

As a result of the spills, FECONACO explains in a press release dated July 24, local communities and the environment are being forced to carry a toxic burden: water and food supplies are being diminished, “wildlife is being contaminated and dying, and biodiversity is being wiped out.”

FECONACO wants the minister, one of the few ministers to retain their position after the recent violence in Bagua, to travel to the region and bare witness to the pollution of lote 8, and “speak to the people here to find out the truth.”

Iquitos, 24 July 2009 – Indigenous communities in the Amazon jungle have been angered by recent statements by Peru’s environment minister, Antonio Brack Egg. In an interview with the newspaper El Comercio, Brack stated that petrol exploitation is having minimal environmental impact. He also referenced Pluspetrol’s Lote 8, on the Corrientes river, as an extraction site which was not causing contamination and was having a positive impact on the nearby communities.

In fact, the monitoring project run in Corrientes by FECONACO (the Federation of Native Communities of the Corrientes) has evidence of four major oil spills in Lote 8 in the first half of 2009.

Wilson Sandy Hualinga, indigenous coordinator of the monitoring project, said, “I see these things because I live there, in the community of San Cristóbal in Lote 8. The oil spills pollute the rivers and ecosystems. The fishermen in these areas are finding less fish and developing unknown diseases. Wildlife is being contaminated and dying, and biodiversity is being wiped out.”

“We know our territory, because we were born and raised there. We also know how petrol companies work, how they cheat and hide from the authorities. Antonio Brack should come and speak to the people here to find out the truth.”

Antonio Brack Egg was one of few ministers to retain their position in a major cabinet reshuffle designed to restore confidence in the Peruvian government. In recent months Peru has been shaken by a series of events, most notably the violent conflicts in Bagua between indigenous protesters and police which resulted in at least 34 deaths.

FECONACO’s monitoring programme has run since 2005, training indigenous people to record evidence of pollution in and around their communities, with the aim of improving the environmental practices of oil companies working in the area.