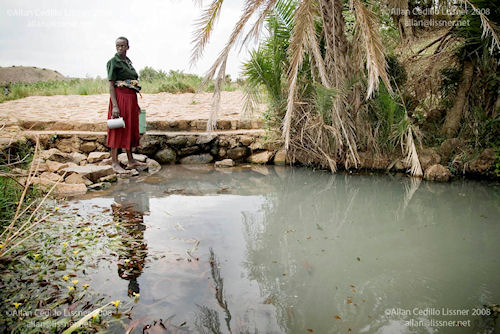 Tanzania Government bans water use near Barrick mine

The Tanzania government has banned the use of water from the Tigithe River, which may be contaminated with Sulphiric acid used by the Canadian company Barrick Gold at their North Mara Gold Mine in the Tarime discrict.

The announcement comes just two days after Tanzanian officials began investigating allegations that the mine’s tailings dam is leaking Sulphiric acid into the Tigithe River, which eventually flows into the largest tropical lake in the world — Lake Victoria.

The leakage is believed to have caused the deaths of at least 20 local villagers and more than 250 heads of cattle in recent weeks.

Late last month, activist groups began calling on the Government to immediately close down the mine until a full analysis of the water had been conducted. They also called for the resignation of the Country’s environment Minister, as well as the Mara regional government and the Tarime district authority “for suppressing cries of common people at the expense of the giant mining company.”

Various Members of Parliament issued similar statements in the days to come: backing the call for an investigation, demanding compensation for the victims, and saying “all negligent government officials” should be “booked” for their part in what both sides of the fence have termed a “scandal.”

“We want all those involved to be taken to task, ‘’ said opposition party Environment Spokesperson Ali Kamis Seif (Mkoani-CUF). “We (opposition) started complaining against such discharges since 2007, but we were ignored because we come from opposition.”

Charles Mwera (Tarime-Chadema) further said that many other people and animals have died from toxins which are now flowing outside the district. “Those experts who (previously) went to the scene and reported back that the water was safe should be taken to task. I was also expecting to hear some ministers stepping down due to this scam,” Mwera states.

The villagers have also been speaking out, even if they are heard the least. They, too, have been calling for the immediate closure of the mine, saying that they are paying a fatal price for an operation that they don’t even benefit from.

“We have no problem with investors, says Esther Mugusuhi, one of the affected villagers. “But (they) must respect and treat us like human beings. These Canadians are killing us…they are not doing business.”

Interviewed by THISDAY, Mugusuhi adds that the mine has incapacitated her and many others. ’’I used to work productively in my farm, but I am now a dependent person…all because of the investors.” She also called on the Canadian Government to intervene by covering the medical costs for all pollution victims .

Mkwave Mwita, another villager, pointed at the Tanzanian Government “for valuing mining activities by foreign investors more than… the welfare of its own citizens.”

’’I think this is the only country on earth where stones (gold) are more valuable than human beings,’’ he stated.

If only it were true. There are more than a dozen gold mines around the world where we can find the same disregard for human life, many of them owed Barrick. For instance, there is the Cortez Mine in Nevada, the Lake Cowal mine in Australia, and the Porgera mine in Papua New Guinea.

The same is true for another Canadian company, GoldCorp, who’s Marlin mine in Guatemala and San Martin mine in Honduras are also believed to be poisoning local waters—with Cyanide and other toxic chemicals.

In a climate of ZERO corporate accountability none of the long list of abuses attached these mines has been properly addressed, for the reason explained so perfectly by Mkwave Mwita.

We can only hope that such a twisted outlook on the value of life will shift–and, in the case of Tanzania, that Barrick and all govenrment officials be held accountable for any actions that led to the death and injury of every last villager, which should also include full restoration of the environment.

Meanwhile, the villagers find themselves without any water. The government has not provided them with a safe alternative.