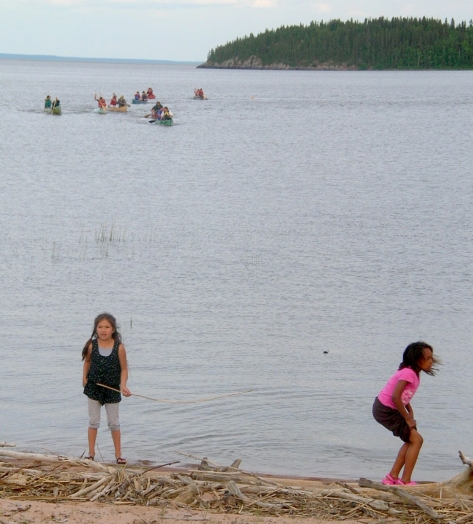 We are NOT A THREAT to the Oil Industry

Below, a statement by Mike Mercredi from the Athabasca Chipewyan First Nation, on the newly-released, roughshod of a report, Resource Industries and Security Issues in Northern Alberta by the Canadian Defense Security and Foreign Affairs Institute (CDFAI).

The report preposterously claims that indigenous people in Northern Alberta are one of the highest threats to Canada’s burgeoning oil industry.

It’s a claim we’ve heard often, on the lips of uneducated vigilantes with too much time on their hands, in textbooks that were removed from the curriculum, and most pertinently, two years ago, in the Canadian military’s draft counterinsurgency manual.

The manual alleged that native activists were on par with Hezbollah and other such terrorist groups.

Thankfully, reason and conscience made its way into the ranks and the claim was removed. Too bad we can’t expect the same thing to happen with CDFAI’s report.

The Athabasca Chipewyan First Nations leadership is shocked and appalled by a recent study released by the Canadian Defense Security and Foreign Affairs Institute (CDFAI) describing the First Nations people as a “threat to the oil industry”. Industry has been negotiating and working with First Nation communities for some time now and it appears that they are committed to work on a plan to develop a sufficient sustainable development program that will protect the traditional way of living for the First Nations people on future proposed extraction and land reclamation projects. Now, with the release of this report by Tom Flanagan which alleges First Nations people as a “threat” to the industry, all negotiations may now be more time-consuming and complicated than anticipated instead of progressing forward confidently with the First Nations of Treaty 8. Chief Allan Adam of the Athabasca Chipewyan First Nations says “It’s very disappointing that a study done by the CDFAI which was sponsored by an oil company is claiming that we are a high risk threat to the oil industry by assuming scenarios of First Nations acting as eco-terrorists”. By accusing First Nations people of “tacit support to illegal activities”, the CDFAI want to create fear among Canadians by stereotyping our youth as disaffected and likely to be recruited into imagined “warrior society eco-terrorist groups”.

What the Athabasca Chipewyan First Nation intended to do is raise the awareness of the health issue’s that the people of Fort Chipewyan are facing. The Athabasca Chipewyan First Nation believes that this report is a maneuver by industry and Government to prevent anyone who advocates opposition and then label them as a terrorist while pushing back even further negotiations; meanwhile the oil sand companies will continue to develop without limitations by removing the “Indian” threat to the industry in Canada. Oil companies based in Canada are exploiting Indigenous people around the world and are using Governments to deal with the local indigenous people by funding militia’s to violently remove them from their homes so they can develop their traditional lands into mines; this is parallel to what is going on here in Alberta with the Government and First Nations people. Since Canada has no applicable laws geared towards what Canadian based mining companies do in other countries, they have used similar tactics to exploit the First Nations people in the Treaty 8 region, by funding the CDFAI to label First Nations people as a “threat”. It also appears they want all Environmental Non-Profit Organizations (ENGO’s) and First Nation’s to take direct actions so they can rationalize the arresting, incarcerating and integrating of First Nations people in a Guantanamo Bay like strategy reminiscent of the Americans and the terrorists who attacked them in 2001.

They want to label the Athabasca Chipewyan First Nation as a threat since the Fort Chipewyan community members are speaking out against the oil industry in recent publicly released documentaries such as H2Oil and Downstream or campaigns held by various ENGO’s. The Athabasca Chipewyan First Nation doesn’t see a future for the next generation if the rapid rate of development continues and the people will have a more difficult time trying to exercise their inherited Treaty Rights, which is deemed as infringement. This whole report is in itself, an unlawful tactic by stating that First Nations are in conflict over traditional territories, thus creating a separation amongst First Nations people who are all signed under the Treaty 8.

With the recent reports of high levels of cancer in Fort Chipewyan, the Athabasca Chipewyan First Nation does not perceive anything positive in the future about the health of our members when the confirmation has already been acknowledged in various reports that the water is contaminated. With the entire world now aware of the oil sands and the people of Fort Chipewyan with high rates of cancers, the oil industry and Government are diverting the attention away from the health issues that the community is facing similar to what Health Canada did by first disregarding the findings of Dr. John O’Connor and then by pressing charges against him and did not deal with the real issues of the people of Fort Chipewyan.