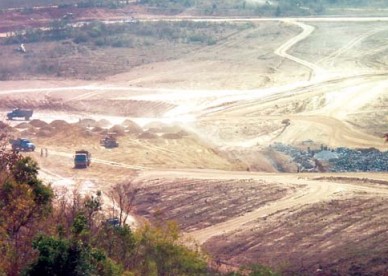 Secretive Russia-Burma mine could displace thousands

A Russian-backed mining project in Burma’s war-torn Shan State will permanently destroy the homes and farmlands of 7,000 Pa-O villagers, according to a new report by the Pa-O Youth Organization (PYO).

Russian and Italian engineering companies are reportedly working together to develop a massive iron ore mine that will “decimate” Mount Pinpet or “Pinetree Mountain” in the eastern Burmese state of Shan.

The project could destroy 25 villages, permanently displacing 7,000 ethnic Pa-O’s from their traditional farmlands. Another 35,000 people who rely on the Thabet watershed on the eastern side of the mountain may also be impacted.

“Fifty people have already been forced to move and were not adequately compensated,” notes the “Robbing the Future” report. “The confiscation of vital farmlands has begun.”

And so has travel restrictions, thanks to a gated wall now stretching across the main road, surrounding the nearby iron processing plant. The wall stands ten feet high, just in front of some underground bunkers.

The gate is only open for 12 hours a day, but even then there’s no guarantee the villagers will be allowed to pass by unless the security guards let them. “Villagers who attempt to pass through the gates after closing or without permission have faced abuse” from the guards, according to the report.

Food Insecurity and fuel shortages is another major concern. For the past two years all 25 villages have been prohibited from collecting anything from the mountain, whether it’s wood or medicinal plants..Factory workers and soldiers are also known to steal food from the villagers.

Water may become the next big sacrifice – once the mine and processing plant is fully operational. “Villagers fear that pollution from the mines could damage the Thabet stream, potentially making fish toxic and in turn destroy crops that depend on the stream for irrigation.”

In addition, the project threatens to “radically alter” the environment, “decimate” the Pinetree Mountain, and cause rampant deforestation and loss of habitat.

For details on these an all other concerns about the Pinpet mining project, download the PYO’s report. You can do so at their website, paoyouthorganization.blogspot.com

As daunting as these concerns are, at the moment they are being overshadowed by the secretive nature of the project. “They are hiding what they’re doing behind walls and fences, but we will be the ones to suffer the effects of these projects”, says Khun Chan Khe, a spokesperson from the PYO.

It’s leading to a lot of speculation that we might not even be talking about an iron project. It might be uranium. Or both.

“Robbing the Future” mentions a recent announcement from Burma’s Ministry of Energy that there are five uranium deposits in the country. Pinpet was not mentioned as one of the sites, but several villagers have stated that uranium is located southwest of the village of Leng Ngock, on the edge of the mountain. Several villagers have also reported servicemen claiming the factory will be used to process both iron and uranium. A military camp has been set up on the mountain.

Then there’s the May 2007 announcement from ROSATOM, the Russian Atomic Energy Agency, stating it had “reached a deal for ‘cooperation in the design and construction in Myanmar of a centre for nuclear research… including a nuclear reactor.’ The announcement came about one year after the Russian-based steel company Tyazhpromexport (TPE) announced it was backing the Pinpet factory.

There is more speculation and rumor, all of which is being “compounded by growing evidence that Burma is strengthening its ties with North Korea, who last month successfully tested a nuclear bomb,” says the Democratic Voice of Burma.

While none of the speculation has been confirmed, “Villagers are extremely worried and fearful” that, in addition to their own displacement, their loss of culture and livelihood, not to mention the abuses, food shortages, and environmental destruction—they may also have to face radioactive contamination.