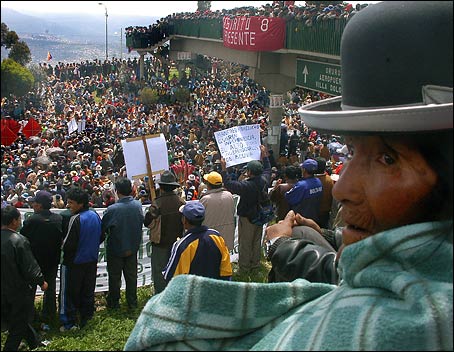 September 30 – Canada drops most charges against Mohawk activist – Facing numerous defence motions that would have laid bare police actions, the Crown dropped most charges Monday against Shawn Brant, a Mohawk from the Tyendinaga who helped organize a blockade last summer of an Ontario highway and rail line, and agreed to a slap-on-the-wrist-penalty for the remaining ones. Prosecutors were initially seeking a jail sentence of 12 years.

Makah grandmothers plan long walk to demand treaty rights be honored – Three Makah grandmothers will leave Wednesday for a 330-mile walk and ride to Portland, Ore., to protest what they say is a continual violation of Native American treaty rights. “Article 6 [of the US constitution] states that treaties are the law of the land and that federal judges will adhere to it,” says Dotti Chamblin, the secretary of the group. “A lot of things haven’t happened that way. We ceded land to have a peace treaty, and there’s a lot of atrocities that have happened to us that would not have happened to any other race of people ­ at least we think so, we grandmothers.”

September 29 – UN Admits Its Climate Change Program Threatens Indigenous Peoples – On September 25, 2008, The United Nations officially [launched] REDD, a collaborative program with the FAO, UNDP, and the World Bank that seeks to bring forests in the carbon market. REDD (Reducing Emissions from Deforestation and Degradation) has caused anxiety, protest and outrage throughout the world since it was created at the failed climate change negotiations in Bali and funded by the World Bank.”

First Nation “Days of action” campaign begins – Centered on ushering in “a new era of first nations relations with the Crown,” the “days of action” campaign is now officially underway. On Sunday, “protesters representing Treaty 4 First Nations brought traffic on Highway 1 east of Regina to a crawl and barricaded the road leading into a pipeline construction compound…”

Indigenous Leader Assassinated In Colombia – An indigenous leader has been assassinated over the weekend by right-wing paramilitaries. It is a deadly reminder of the death squad culture still thriving in Colombia under the U.S.-backed Uribe regime. According to the Regional Indigenous Council of Cauca (CRIC), Raúl Mendoza, indigenous governor of the cabildo Peñón and former member of the council, was shot dead inside his home by paramilitary hitmen. The council says the murder is the last of three assassinations that took place in Cauca the past week.

TransCanada must prove it respects Lubicon rights – The Lubicon Cree Nation have informed TransCanada that they are willing to consider talking with the company about their plan to build a pipeline through unceded Lubicon Territory. However, Chief Ominayak of the Cree Nation states that such a meeting depends solely on the Crown corporation respecting Lubicon rights, something that must begin with the “suspension of TransCanada’s application […] to build that pipeline without first obtaining Lubicon agreement.”

Dam expansion threatens the Winnemen Wintu – The federal government is considering enlarging a dam to boost [California’s] water supply, which would flood what little land remains above water where an American Indian tribe had fished and farmed for centuries. Nine-tenths of the ancestral land of the Winnemen Wintu was submerged in 1945, when the federal government built a 602-foot dam downstream of their ceremonial and prayer grounds.

September 28 – Wet’suwet’en Vote Unanimously for 10-Year Coalbed Methane Moratorium – The First Nations Summit has just passed a resolution calling for a 10-year moratorium on all coalbed methane (CBM) drilling in the province of BC. The resolution comes on the heels of a similar one passed yesterday by the Union of BC Municipalities.

Brazil: Opposition to Guarani land rights intensifies – The Guarani Indians of the Brazilian state of Mato Grosso do Sul suffered a setback last week when FUNAI, the government’s Indian affairs department, suddenly suspended studies being carried out to identify their territories. The Guarani suffer from acute land shortages, and have been fighting for decades to win back their land. With the rapid expansion of sugar cane and soya plantations, they are being squeezed onto tiny reservations or forced to camp by the side of highways.

Tribal members concerned about proposed oil refinery – Tribal community members from the Mandan, Hidatsa, and Arikara Nations have major concerns about the dangers they will face if the Council of the Three Affiliated Tribes (TAT), along with Triad Engineers Limited (of Linden, Utah and Calgary, Alberta, Canada), go ahead with their plan to build a new oil refinery on the Fort Berthold Reservation in North Dakota.

September 24 – Sarawak government deposes Penan leaders – In an attempt to break the resistance to logging in the rainforests of Sarawak, the government has officially announced that it will no longer recognize tribal leaders in some Penan communities.

September 19 – Police carry out surprise raids on corporate contaminators – On September 10th, a caravan of inspectors from Argentina’s National Environmental Authority, the SAYDS, accompanied by 100 national guardsman and a busload of federal and local police, carried out a surprise raid on 34 companies said to be contaminating the Matanza-Riachuelo river basin in northeastern Buenos Aires.

Ambushed in the Land without Evil – On Thursday, September 11th at three in the morning in Tres Barracas, near the town of Porvenir, Bolivia, the prefecture’s people ambushed and brutally machine-gunned the peasants as they marched towards a congress of their departmental organization. Men, women and children ran to save their lives, but they were immediately riddled with bullets, wounded or taken by force to be tortured and later cynically handed in by illegal groups associated with the Prefecture to the Police, pretending that the victims of the barbarism were the guilty. (more info)

India: the hills are alive with the sounds of protest – A powerful organisation of uranium-rich villages of Meghalaya today asked the Centre to “forget” about mining uranium in West Khasi Hills, as it would continue to oppose any move to put people’s health at risk. The Langrin Youth Welfare Association (LYWA) is an NGO comprising representatives from 15 villages in West Khasi Hills.

September 5 – One wounded as paramilitaries attack Zapatistas – The Zapatista Good Government Junta (JBG) “Corazón del arcoiris de la esperanza,” based in the Chiapas jungle village of Morelia, issued a statement denouncing aggression by followers of the Organization for the Defense of Indigenous and Campesino Rights (OPDDIC) in the community of K’an akil, autonomous municipality Olga Isabel. Various shots were fired “without reason or motive” in the Aug. 29 attack against Zapatista campesinos—one of whom was wounded in the abdomen.

People of Bhopal Lead the Way to Justice – Some important news came out of India last month that didn’t get much play here in the West, and perhaps for good reason. On August 8, the People of Bhopal won a major victory when the Indian government agreed to meet the full set of demands issued by the ‘Walk Your Talk’ campaign for justice in Bhopal.

September 2 – The Ashaninka People Will Not Allow These Abuses – “We will not allow the oil company to come in because it will bring pollution and we will suffer,” said Medaly Pancho, a member of the Ashaninka community in the central Peruvian province of Junín. “We hunt and fish, we live our peaceful lives, and we don’t want that to change.” Junín is the scenario of yet another conflict between indigenous people and extractive industry companies in Peru’s Amazon jungle region.

Grassy Narrows youth show signs of poisoning – Are Aboriginal children in North Western Ontario still paying the price of a 46-year-old environmental crime? Cerebral palsy, developmental delays and seizures are symptoms of mercury poisoning, and they are conditions that community members at Asubpeeschoseewagong (Grassy Narrows) are noticing with concern among their young.

On the Matter of Tar Sands & Indigenous Lands – In this 10 minute video, Clayton Thomas-Mueller, of the Mathais Colomb Cree Nation (Pukatawagan) in Northern Manitoba, talks about the Alberta Tar Sands industrial project, its effect on the health of indigenous communities, and the industry’s role in continuing Canada’s exploitative colonial legacy.

Testimony of indigenous lawyer to the Supreme Court – Before the first of eleven Brazilian Supreme Court Judges handed down his ruling on whether or not the government should uphold the legally-recognized Indigenous Territory of Raposa-Serra do Sol — an indigenous lawyer, Joênia Batista de Carvalho, rose in front of the Judges to defend her people. This is a video of her words.