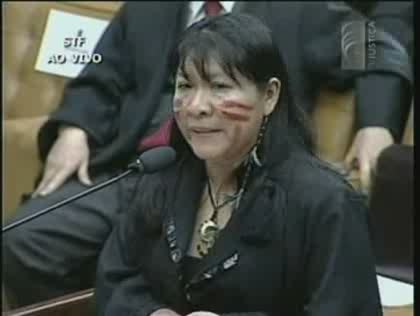 Testimony of indigenous lawyer to the Supreme Court

Before the first of eleven Brazilian Supreme Court Judges handed down his ruling on whether or not the government should uphold the legally-recognized Indigenous Territory of Raposa-Serra do Sol — an indigenous lawyer, Joênia Batista de Carvalho, rose in front of the Judges to defend her people.

It was the first time in the history of Brazil’s Supreme Court that such an event occurred.

You can find a video of Carvalho’s 10-minute presentation, below…

“We have lived here for over 30 years that drag on, waiting for the formal land tenure process to be concluded.

“During these 30 years, 21 indigenous leaders have been assassinated. Numerous houses have been burned, many threats have been made, and are made still, and registered with Federal authorities and Federal police.

“We are accused of being thieves in our own land, of being invaders. We are slandered, we are discriminated against. This must come to an end.

“It falls upon the Federal Supreme Court, this Court, to enforce what we’ve been hearing said for a long time: that traditional indigenous lands go well beyond mere houses.

“Many people do not know that indigenous lands cannot be characterized only by dwellings. They also include areas where people fish, hunt, walk, maintain sacred places, where we maintain spirituality, where our culture is maintained. This is fundamental so that we can guarantee the importance of our land not [only] for today, but for tomorrow also. We want this.”

“Today we are living a truly historic moment in Brazil. The indigenous lands [of] Raposa Serra do Sol are an emblematic case for the whole national territory, and they represent the voice of indigenous peoples.

“This is about enforcing in practice what was promised 20 years ago: our rights of origin, our right to inviolable land rights, our right to live in accordance with our customs and traditions. And so those who define indigenous land are the very indigenous people themselves. I want to remind [you] here, Justices, that what is at play here is the 500 years of colonization. This is what is at play.”