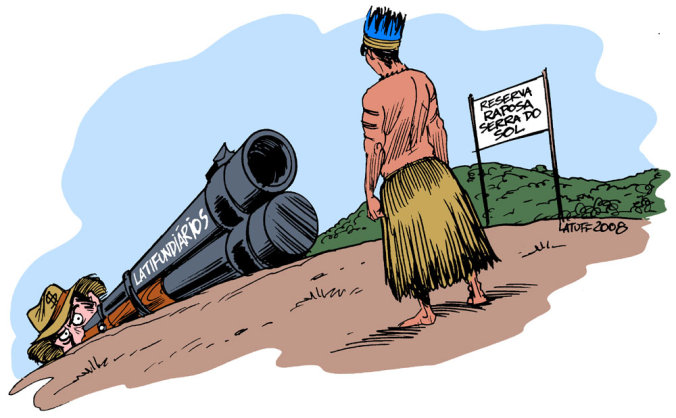 The first of eleven Supreme Court Judges cast his vote in the landmark case that will decide the future of Raposa-Serra do Sol, a legally-recognized Indigenous Territory in the Brazilian state of Roraima.

“Magistrate Carlos Ayres de Britto, the first and only judge to have voted so far, used the Portuguese word ‘esbulho’ (dispossession or unlawful possession) to describe the occupation of parts of the reservation by non-indigenous landowners who want to break up the 1.7 million hectare reserve in order to hold on to the land that they farm,” writes IPS News.

Here, Britto is referring to the group of vigilante rice farmers that have refused to leave the territory, despite being ordered to do so by a 2005 Presidential decree.

A key judge in the case, Britto further stated that the reservation must remain intact in order for Brazil to uphold the constitutional rights of the the Makuxi, Wapixana, Ingariko, Taukepang, and Patamona peoples who share the territory.

He also emphasized that the five communities are the region’s original occupants, and that “territories like Raposa-Serra do Sol which border other countries are not incompatible with national security, as the military have claimed,” notes a press release by Survival International.

Following Britto’s ruling, which took about two hours to deliver, the next judge in line to vote requested an adjournment to further examine the case.

A final ruling is expected to be handed down by the end of the year.