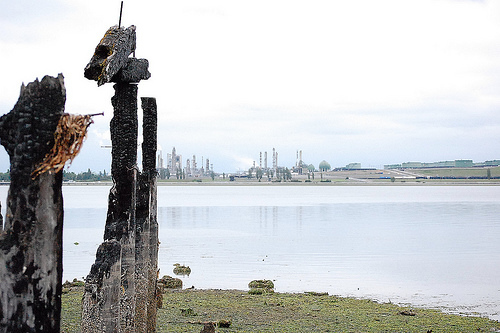 Tribal community members from the Mandan, Hidatsa, and Arikara Nations have major concerns about the dangers they will face if the Council of the Three Affiliated Tribes (TAT), along with Triad Engineers Limited (of Linden, Utah and Calgary, Alberta, Canada), go ahead with their plan to build a new oil refinery on the Fort Berthold Reservation in North Dakota.

“The people of the Mandan, Hidatsa, Arikara Nations and of the surrounding area are all already living and dying with the devastating, adverse effects imposed upon our health & well being by the existing multiple polluting stressors of several coal/lignite power plants, the USA’s first coal gasification plant, coal mining, oil wells, the states existing oil refinery, and farm land herbicide/pesticide use, and we all agree that the proposed refinery’s toxic effects to human and environmental health and well being can not be and will not be tolerated or accepted,” explains the Environmental Awareness Committee (EAC), a grassroots group that was formed by tribal members. “The incidence of asthma, cancer, cardiovascular disease, kidney disease, diabetes, and many other chronic health conditions, diagnosis and associated death is of already extreme number amongst the Indian and non-Indian alike. Health care needs and existing emergency services are also extremely lacking and unmet.”

The EAC is also concerned about existing levels of mercury contamination in fish, to which the North Dakota State Department of Health have responded on numerous occasions by issuing Fish Consumption Advisories. “[This pollution] is a result of coal fired power plants surrounding the Three Affiliated Tribes’ reservation,” notes the press statement, which was published in the Indigenous Environmental Network’s (IEN‘s) September 2008 bulletin.

If the refinery is built, an immense amount of Benzene and over 600 toxic chemicals will be added to this dire-looking assault on life.

“We, the Environmental Awareness Committee, Save Our Sacred (S.O.S) Earth Campaign, of the Mandan, Hidatsa, Arikara Nations people have great concerns of the unacceptable, expected, immediate, and bio-accumulative devastation that the proposed refinery processes and emissions would bring to the health and well being of the children and their developing bodies, the future generations, “all our relatives”, of which encompasses all life, including the Living Air-the Sacred Breath of our Creator, the Living Sacred Waters-the life’s blood of the earth of which sustains all life and the Living, Sacred Earth-our Mother, whom nurtures and sustains us. There is a reason that a new oil refinery has not been built in our USA for over 30 years, no one wants these proven extremely toxic and polluting industries in their back yard!”

“We have also come to realize that the intended feed stock of the proposed refinery is a product of the tar sands in Canada. Not only would our tribal council be imposing a sort of self-imposed toxic genocide upon our people, the Mandan, Hidatsa, Arikara Nations, but we are horrified to realize that we will in effect, also be contributing to the toxic genocide of our indigenous relatives to the North of us, the people of Dene, Cree, and Metis Nations, and to the irreversible devastation to their homelands and their subsistence way of life.”

Commenting briefly on the potential of renewable energy sources — something that “Tribal Nations of the Great Plains could be on the forefront of” — the EAC points to the urgent need for action, and for “the entire world to reduce its dependence on non-renewable, polluting energy sources (oil, coal, etc.) and expand upon the development of our non-polluting alternative energy resources and the potential of wind, solar and hydrogen fuel cells.

For more information, you can contact: Environmental Awareness Committee, Save Our Sacred (S.O.S) Earth Campaign