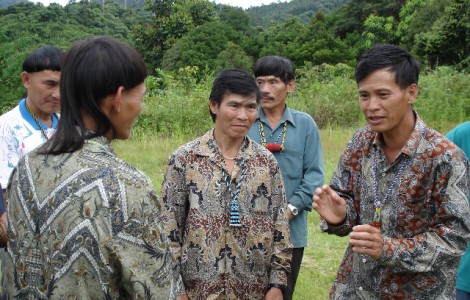 In an attempt to break the resistance to logging in the rainforests of Sarawak, the government has officially announced that it will no longer recognize tribal leaders in some Penan communities.

1. Saund Bujang from the community of Long Benali, who successfully led an effort to stop the timber company Samling from entering their lands through the use of blockades and a media campaign. The government is currently trying to replace him with a Samling stakeholder.

2. Bilong Oyoi from the community of Long Sait (pictured on the right), who is one of the leading plaintiffs in the long-standing Penan land rights claim. Bilong received a letter from the government simply stating that he had been deposed.

3. Another plaintiff in the land rights case, the late Kelesau Naan, former headman of Long Kerong who disappeared in October 2007. Two months later, he was found dead. The community of Long Kerong community have since elected a new headman, the former deputy headman Tirong Lawing. The government refuses to recognize Tirong.

4. The government also refuses to recognize the newly-elected representative of Long Lamai, Wilson Belare, who was chosen to replace his father, former headman Belare Jabu, who passed away in May 2007.

“We protest against these violations of our right to elect our own leaders”, a Penan representative from the Upper Baram region has said. “Despite all these attempts to undermine our leadership, the communities in the Upper Baram stand firmly behind their elected leaders.”

The non-recognition of the elected community headmen by the Sarawak State Government is a clear violation of the UN Declaration of the Rights of Indigenous Peoples,” adds the Bruno Manser Fund. “The Declaration, which has been adopted by Malaysia, upholds in its article 18 the right of indigenous communities ‘to participate in decision-making in matters which would affect their rights, through representatives chosen by themselves in accordance with their own procedures’.”

If you would like to support the Penan, please head over to Survival International’s website and send a letter to the Office of the Chief Minister of Sarawak, urging him to recognize all of the Penan’s lawfully elected leaders.