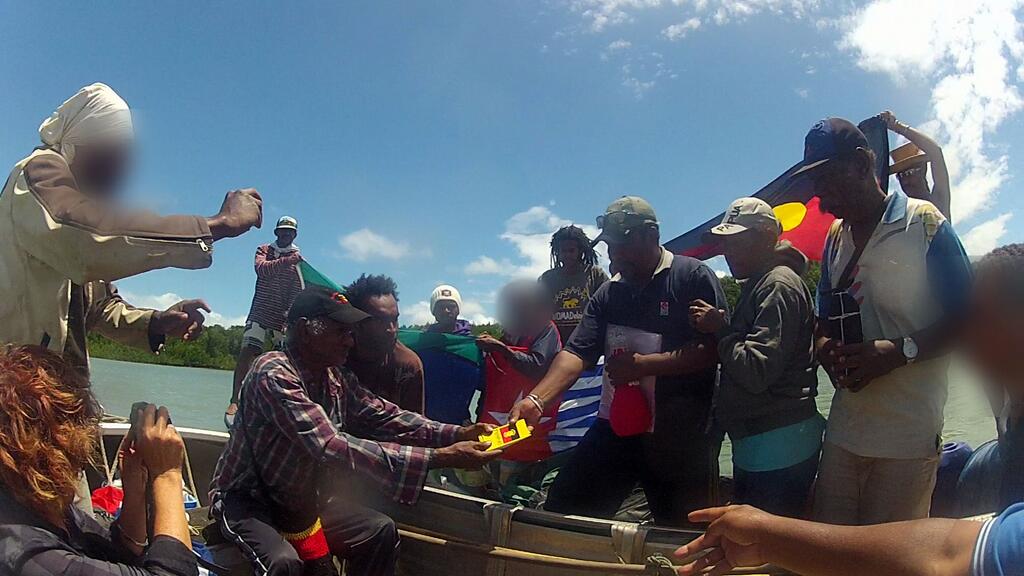 Maasai people in Tanzania celebrated the Prime Minister’s decision to scrap a controversial plan to take 1,500 square mile of land from them in the name of conservation. The area, known as Loliondo, will instead remain with the Maasai, who the Prime Minister acknowledged for taking ‘good care of the area’ since ‘time immemorial’.

The Guarani community of Apyka’i together with The Aty Guasu Council of the Kaiowá reclaimed traditional lands in the municipality of Dourados, in Mato Grosso do Sul, Brazil. The Apyka’i community–having already waited two decades for the government to demarcate the land in question–finally decided that enough was enough. For the past 14 years, The Apyka’i community has been living and dying at the edge of a road–federal highway BR-463. Since retaking the land, the community has received several death threats. A group of men also reportedly “threw a liquid poison in the water” and then promised they will attack and evict the Guarani.

The Tahltan Central Council celebrated a decision by Fortune Minerals’ to halt mineral exploration activities on Klappan Mountain inside the Sacred Headwaters region of Northern British Columbia, Canada. The decision came after several bold actions led by the Klabona Keepers including the delivery of an eviction notice, a blockade and the take over of a drilling site. However, Fortune Minerals added that they have no intention to leaving Mount Klappan for good; rather they are trying to diffuse tensions by pulling out of the area for several months.

Basin Electric Power Cooperative is trying to run a new transmission line through the painfully historic Tahca Wakutepi massacre site in North Dakota. In 1864, Union Brigadier General Alfred Sully and his troops engaged in the wholesale slaughter of Lakota and Dakota, men, women, children, elders and warriors. Not satisfied with the massacre of human bodies, they destroyed the people’s crops, supplies, and lodges, as well. Now, it seems, Basin Electric is picking up where Sully left off.

Tsilhqot’in families set up a blockade to stop logging in an area southwest of Williams Lake, in the Central Interior of British Columbia. The blockaders are trying to prevent any further logging in the area because of declining moose populations in the Chilcotin. A second blockade was set up just over one week later.

A large group of Penan Peoples reinstated a blockade against the controversial Murum dam in the Malaysian state of Sarawak. The blockade began soon after the Penan village of Long Wat–who would be the first to face the waters of the Murum reservoir–reached an agreement with the government for their voluntary resettlement, an agreement that other villages found to be wholly inadequate. With the village of Long Wat seemingly out-of-the-way, and the renewed blockade in full force, Sarawak Energy started filling in the reservoir without giving notice to any of the affected villages.

Over 30 people, including citizens of the Winnemem Wintu and Hoopa Valley Tribes, protested government plans to raise the Shasta Dam. The protest was held as part of a series of events to counter the Bureau of Reclamation’s 75th anniversary celebration of the Shasta Dam. Tribal leaders say that raising the dam would inundate many sacred sites not already covered by the waters of Shasta Lake. They also oppose the dam raise because it has been designed in conjunction with Governor Jerry Brown’s Bay Delta Conservation Plan, a project that would hasten the extinction of Central Valley salmon and steelhead, Delta smelt, longfin smelt, green sturgeon and other species.

The International Union for Conservation of Nature (IUCN) attempted to greenwash Shell Petroleum Development Company Ltd of Nigeria (SPDC) with a flawed report on the oil disaster in Ogoniland, Nigeria. In a critique of the report titled “Sustainable Remediation and Rehabilitation of Biodiversity and Habitats of Oil Spill Sites in the Niger Delta” Professor Richard Steiner details numerous concerns including factual inadequacies, ill-drawn conclusions and blatant attempts to shift blame of repeated spills on “anthropogenic activities”.

San Jose Nacahuil, a small village near Guatemala City with a majority of Maya – Kaqchikel inhabitants, made international headlines after a group of gunmen killed 11 people and wounded 28 more in a frenzy of unrequited violence. The Media reported that corrupt officers or gangs were the main suspects in the killings, however, Kaqchikel traditional authorities strongly denounced the claim. Since March 2012, the village has maintained a blockade against American mining company Kappes Cassidy and Associates (KCA’s), enduring “violent and systematic repression organized by the mining company, pro-mining community members and the government.”

The Lutsel K’e Dene, Yellow Knives Dene and Tlicho First Nations issued a final plea to the Canadian government to stop the oncoming Gahcho Kue diamond mine project, citing concerns over water quality, caribou migrations, the traditional use of the land and general pollution concerns. The Mackenzie Valley Environmental Review Board (MVEIRB), saying little about Indigenous rights, admitted that the project would “Likely [cause] significant adverse environmental impacts”, however, it still decided that the economic gains would outweigh any such impacts. The project is expected to commence some time between 2014-2015.

The Wixarika People of Mexico and all others who hold Wirikuta to be sacred celebrated a major legal victory with the announcement that the federal court granted the suspension of all work on mining projects in the territory, including the projects of Canada’s Revolution Resources and Frisco Mining Group, owned by Mexican tycoon, Carlos Slim. Under the court ruling, no further mining-related work may take place in the Wirikuta Natural Protected Area in San Luis Potosi until the legal case requesting an injunction against the concessions is resolved.

Evading the Indonesian navy, two tiny boats met near the Australia-Indonesia border to ceremonially reconnect the indigenous peoples of Australia and West Papua. The ceremony was the pinnacle of a 5000km journey beginning in Lake Eyre, in which sacred water and ashes were carried and presented to West Papuan leaders. The cultural exchange of Indigenous elders was held in secret, due to threats made by Indonesian government ministers and military officials who had stated that the navy and air-force would “take measures” against the peaceful meeting

The Ethiopian government vowed to continue with its massive villagization program despite continued human rights complaints. Already more than a hundred thousand Anuak and other Indigenous Peoples have been forcibly relocated to settlements in order to free up their land for the transnational agro-industry. Many of the new settlements are located on infertile land and lack access to even the most basic services. The villagization program is made possible with generous contributions from the World Bank, the U.K. Department for International Development (DFID) and the U.S. Agency for International Development (USAID).

BriBri communities rejected a new government proposal to permit U.S. military incursions onto their lands in the remote area of Alto Telire in the county of Talamanca, Costa Rica. A Bribri leader condemned the proposal, arguing that such an action would threaten public safety and serve to militarize Bribri territory. According to the proposal, SOUTHCOM would enter and move throughout Bribri lands without prior consultation or consent in order to provide various Costa Rican agencies with direct access to communities in the region. Based in Miami, Florida, SOUTHCOM is the arm of the U.S. Department of Defense responsible for all U.S. military activities throughout Central and South America and the Caribbean.

A respected B’laan “bong fulong” (tribal elder) was killed by government troops at the Tampakan Copper-Gold Project on the southern Philippine island of Mindanao. According to various reports, Anteng Freay, head claimant of the Ancestral Domain territory of the Atbol B’laan territory, was killed a few meters away from his house during a government raid. 134 empty shells were found around Anteng Freays house. One other person, who went to bong fulong Freay’s aid, was also shot and killed.

Some 200 indigenous Mapuche blocked the entrance to a facility of Argentina’s state-controlled Yacimientos Petrolíferos Fiscales (YPF) oil company to protest the burning of five of their buildings. The residents blamed YPF security guards for the fires, which destroyed four homes and the meeting place for their community. The first of the houses set on fire were just 100 meters from a new plant that YPF is constructing.

Members of the Gila River Alliance for a Clean Environment (GRACE) filed a civil rights complaint against the Arizona Department of Transportation for proposing and promoting construction of the South Mountain Loop 202 Freeway. If built, the freeway would have devastating negative cultural, spiritual and religious impacts on the Akimel O’odham (Pima) and the Pee Posh (Maricopa) Peoples of the Gila River Indian Community.

Ohontsiawakon: The Land is Held – Kanetohare explains the meaning of Ohontsiawakon, otherwise known as the Aionwatha Belt, 5 Nations Belt and Hiawatha Belt. He details the core values of the Haudenosaunee, the founding of the league, and how this agreement pertains to lands.

Message to Brazilian agribusiness congressmen – Worried about the future of his people, Pedro Vicente Karai Miri, Guarani, recorded a message for the National Congress of Brazil.

Sacred Headwaters Drill Take Over – Meet the Klabona Keepers and the folks at Beauty camp as they take over a drill site that Fortune Minerals used for its environmental assessment on sacred land.