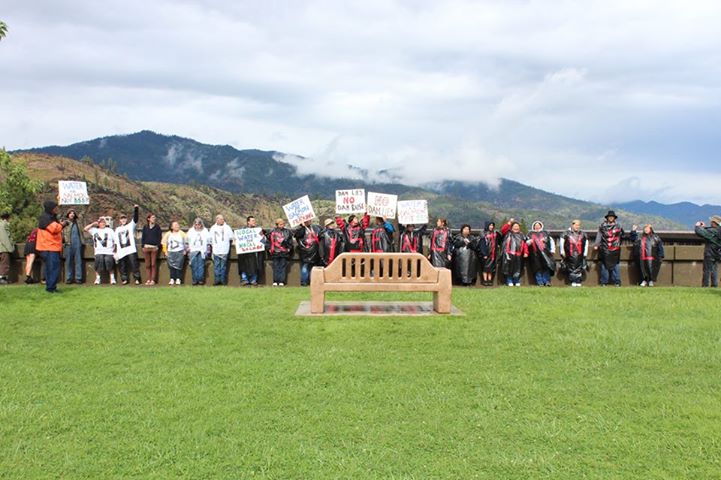 The Winnemem Wintu Tribe and supporters tell the Bureau of Reclamation, "No Dam Raise, No Tunnels!" Photo by Dan Bacher.
Support our journalism. Become a Patron!

The Winnemem Wintu Tribe and supporters tell the Bureau of Reclamation, “No Dam Raise, No Tunnels!” Photo by Dan Bacher.

Over 30 people, including members of the Winnemem Wintu Tribe, Hoopa Valley Tribe and their allies, protested government plans to raise Shasta Dam and build the peripheral tunnels under the Delta in front of the Visitors Center at the dam on Saturday, September 21 as the first rain of the fall poured down on them.

The protest was held as part of a series of events, including several film showings, to counter the Bureau of Reclamation’s 75th anniversary celebration of Shasta Dam the week of September 15-22.

The protesters wore raingear emblazoned with letters spelling out, “No Dam Raise, No Tunnels,” on the side of the Visitor Center. They also shouted out, “No Shasta Dam Raise, No Twin Tunnels” as they held an array of signs, with the dam in the background.

Tribal leaders say the dam raise will inundate many of the sacred cultural sites not already covered by the waters of Shasta Lake. They also oppose the dam raise because it is designed in conjunction with Governor Jerry Brown’s Bay Delta Conservation Plan to build the peripheral tunnels.

The construction of the twin tunnels would hasten the extinction of Central Valley salmon and steelhead, Delta smelt, longfin smelt, green sturgeon and other species, as well as imperil the salmon and steelhead populations of the Trinity and Klamath rivers. The “habitat restoration” proposed under the plan would also take huge areas of fertile Delta farmland out of production in order to continue irrigating selenium-filled, drainage-impaired land on the west side of the San Joaquin Valley.

“We started out a small group on this rainy day – a day like the salmon like it! – but soon grew to be big enough to make a human banner saying ‘No Dam Raise; No Twin Tunnels! the Chief being the exclamation mark,” explained Misa Joo, a member of the Winnemem Wintu Tribe.

The tribe and their supporters spent the whole day at the dam telling their message. With placards and banners, they marched into the Visitor Center where they held an impromptu and thorough discussion on the road of destruction that California politicians, greedy water exporters and corporate interests are taking us down by supporting the raising of Shasta Dam and the construction of the twin tunnels.

During the discussion, Winnemem Wintu Chief Caleen Sisk, referring to corporate agribusiness interests on the west side of the San Joaquin Valley, emphasized, “Farms in the desert are killing our water systems. The selenium pollution of the water is only the tipping point, only an indicator of what is coming.”

“EVERYTHING is threatened if the water is not allowed to go to the sea. And the rainfall that falls in the desert is as the Creator has intended,” she said.

“People don’t even know what real water tastes like now,” she added, referring to the chlorinated and bottled water that people now drink. 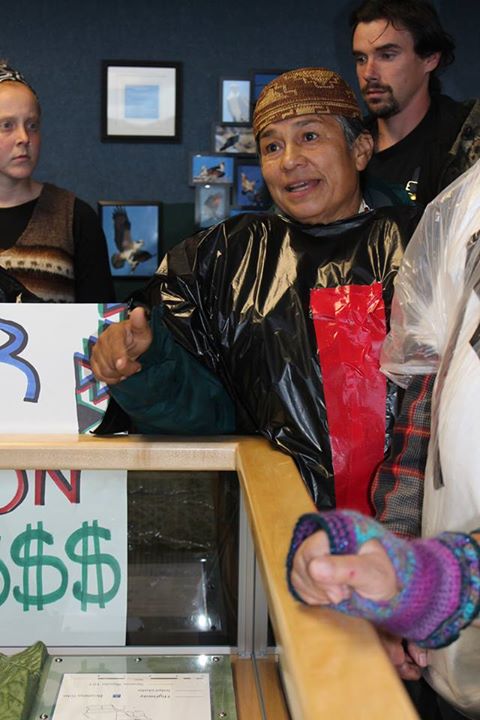 Chief Caleen Sisk slams the Bureau plan to raise Shasta Dam – and exposes the false claim that it will “save” the salmon. Photo by Dan Bacher.

She noted how the Bureau claims one of the two reasons for the dam raise is to provide a larger cold water pool to “restore” the salmon. “However, the cold water pool in place now hasn’t created more salmon,” Sisk said.

Sisk emphasized that the loss of salmon will result in a huge catastrophe for fish, people and the planet. “Who will turn over the rocks in the river when the salmon are gone? Who will provide the nutrients to the ecosystem? Without the salmon, there will be a major disaster,” she said.

Instead, David Martinez, Winnemem Tribal Member, pointed out the solution to restoring the salmon is not raising the dam and building the twin tunnels, but to provide passage over Shasta Dam so the winter run Chinook salmon can once again ascend the McCloud River to spawn.

“A half mile channel between Dry Creek and Cow Creek can allow the salmon to migrate upriver for a lot less money than the billions it will cost to raise the dam and build the tunnels,” supposedly to “restore” salmon, he noted.

Dania Colegrove, a Hoopa Valley Tribe member and organizer for the Klamath Justice Coalition, pointed out on the relief map of the Central Valley Project at the Visitor Center how Trinity River water is diverted through a tunnel from Lewiston Reservoir and exported into Whiskeytown Reservoir. From there, it is released into Clear Creek, a tributary of the Sacramento, to be used by Westlands Water District and other agribusiness interests.

The tribal members and volunteers also rented a houseboat, on which they erected banners proclaiming, “No Dam Raise.”

A group of environmental activists from the North Coast showed up to support the Winnemen during the protest.

Chad from Earth First! Humboldt, stated, “We are here because we believe it is really important to show solidarity with indigenous struggles like the Winnemem Wintu in their battle to stop the raising of Shasta Dam and the construction of the tunnels.”

Joo summed up, “It is up to each one of us to educate and activate. Water districts and political leaders are supposed to be making water policy that helps the people, serve the public interest, and protect resources for future generations. And that was the message we carried all day long, stopping in downtown Shasta Lake City by their mock dam and waterfall to hold our signs where the freeway empties into the town.”

Ironically, the Winnemem Wintu protest and their series of counter-celebration events appeared to draw many more people than the Bureau’s official events.

The Tribe and its allies held a series of film showings to show the other side of the anniversary, starting with the premiere of the wonderful film, Toby McLeod’s “Pilgrims and Tourists,” showing the commonality of struggles between the Winnemem in California and the indigenous people of the Altai Republic of Russia, at the Cascade Theatre in Redding on Saturday, September 14. They also held screenings of Restore the Delta’s “Over Troubled Waters” and Will Doolittle’s “Dancing Salmon Home.”

Sisk believes that the poor attendance at the official celebration events was probably because the “celebration” was created as political tactic to falsely portray the myth that local communities “support” the dam raise when they in fact don’t.

Before the Idle No More event, Sisk explained the reason for the protest. “We want them to know we’re not going to be idle no more and that they need to deal with us as real people,” explained Sisk. “There’s nowhere else we can go in the world to be Winnemem. If they raise the dam, they will be taking away our future as a people.”

“We can’t go to Hoopa or Navajo land to learn to be Winnemem,” Sisk said. “This is our Mother Country. We want our salmon back and we want access to participation in the process as a viable community. In their environmental impact report, they list everything we have as ‘archeological’ sites. However, that’s where we dance – that’s where we bring our girls across the river in the puberty ceremony.”

“We are not going to fall silent for this BOR organized celebration priming the pump for a further raise which will drown the rest of our sacred places, which will reduce the chance for introducing salmon above the dam, which will put a big ol’ gravel pit in our neighbors’ neighborhood and hugely and negatively impact the houseboater’s businesses and campgrounds,” said Sisk. “It’s not just our issue!”

“To make room for the reservoir, the BOR stole our lands, destroyed our salmon run, and submerged our burial grounds and sacred sites,” according to Sisk. “Many Winnemem were left homeless, and we still have yet to receive to the ‘like lands’ that were promised to use in the 1941 Indian Lands Acquisition Act, which authorized the stealing of our land.”

“The McCloud River, a world class fishing river, should have the wild Chinook back. The same ones that were sent to New Zealand are ready to come back,” Sisk concluded.

A short video on the protest is available at: http://www.youtube.com/watch?v=ZxhEKI3kt8A&feature=youtu.be

The 90-day comment period on Draft Environmental Impact Statement for the Shasta Lake Water Resources Investigation began on Monday, July 1, and all comments must be received by midnight Monday, September 30. The Draft EIS documents the evaluation of potential effects of six alternative plans to modify the existing Shasta Dam and Shasta Reservoir Project, located approximately 10 miles northwest of Redding, Calif.

For more information on the Winnemem Wintu, go to: http://www.winnememwintu.us 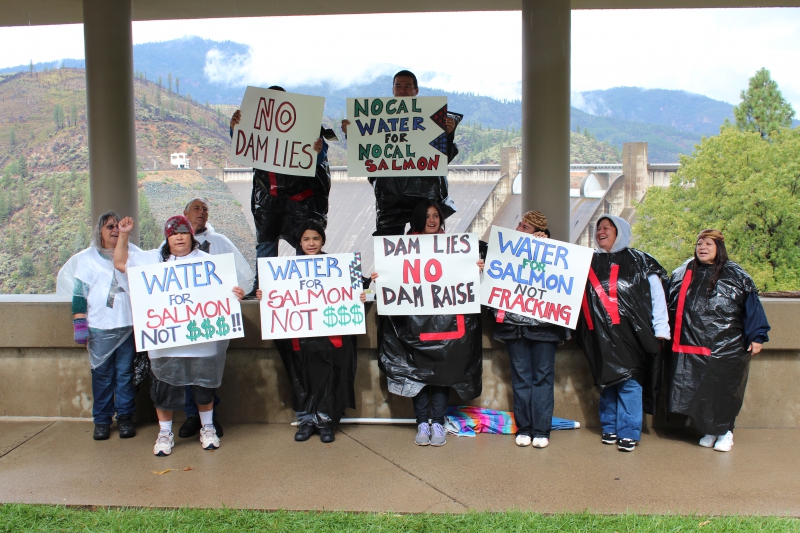 The Winnemem Wintu Tribe protests plans to raise Shasta Dam and to build the twin tunnels during a break in the rain. Photo by Dan Bacher.