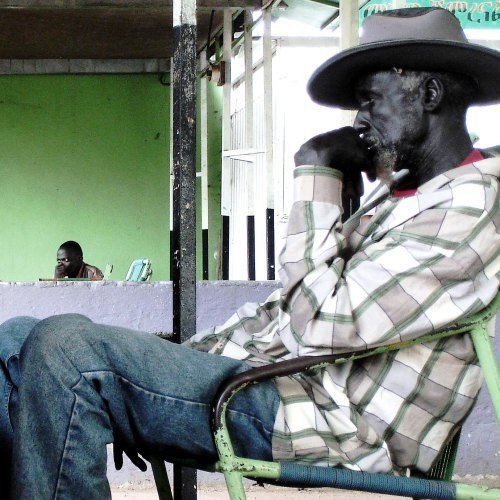 photo by
Support our journalism. Become a Patron!

Millions of acres of Ethiopia’s most fertile lands are being offered to foreign investors, often in long-term leases and at bargain prices. At the same time, through its ‘villagization’ program, the Ethiopian government is forcibly displacing hundreds of thousands of Indigenous Peoples in order to free up their land so the transnational agro-industry can move in and grow foodstuffs and bio-fuels for export. It is a process of dispossession in which Indigenous Peoples are being forced to become dependent on aid handouts having lost their land and their ability to produce their own food.

For over a year, the Anuak and other Indigenous Peoples of the Gambella region of Southwest Ethiopia have been forced into government created villages which seldom contain the amenities promised to them. There is little access to food, arable land, water or electricity.

Last year the Anuak implicated the World Bank in the many severe human rights abuses that are being carried out as part of this resettlement. Last April, Bank President Dr. Jim Yong Kim announced, “The World Bank Group shares these concerns about the risks associated with large-scale land acquisitions. He conceded that more efforts “must be made to build capacity and safeguards related to land rights—and to empower civil society to hold governments accountable.”

The World Bank has been a key investor in several more land grabbing scandals across the developing world, despite their stated principles of respecting Indigenous People’s right to Free, Prior and Informed Consent before projects that affect their lands.

However, in this case, the World Bank, with its links to the Ethiopian Government’s Protection of Basic Services Program (sponsoring the villagization), has denied evidence that their funds are linked to villagization and says they haven’t encountered any human rights violations in the area.

An independent panel at the World Bank has been created to investigate the issue. The Inspection Panel, argues the position of denying the allegations of financing human rights abuse is not sound, saying: “The two programs depend on each other, and may mutually influence the results of the other.”

In a letter sent to the panel last year, Ethiopian refugees say some people have been forcibly relocated from their land, which is now being leased to foreign investors. “These mass evictions have been carried out under the pretext of providing better services and improving the livelihoods of the communities,’ says the letter. “However, once they moved to the new sites, they found not only infertile land, but also no schools, clinics, wells, or other basic services.” It also says they were forced to leave their homes and abandon their crops just before the harvest, and were not given any food assistance during the move. Those farmers who have refused to move from their land have been targeted for arrest, beating, torture and killing,” the letter says. The refugees state that they have been severely harmed by the World Bank financed project which is contributing to the Ethiopian Governments program of forced villagization.

US and UK development agencies have been tied to the same alleged abuses, especially in the Lower Omo Valley. Around the same time the World Bank was implicated for its sponsorship abuses and land theft, the U.K. Department for International Development (DFID) and the U.S. Agency for International Development (USAID) were accused of ignoring evidence of human rights abuses including intimidation, beatings and rape.

A farmer from the Gambella region is attempting to sue the UK government after claiming that its funding of a project led to such human rights abuses against his family. The man–known as Mr. O–told his lawyers he was evicted from his farm, beaten and witnessed rapes as part of the “villagization” scheme.

According to his lawyers, Mr. O asserts that his family was forced to resettle in a new village where there was no replacement farmland or access to food and water. When he tried to return to his former home, Mr. O says he was hit repeatedly with a rifle butt and taken to a military camp by Ethiopian soldiers where he was gagged and subjected to further beatings.

Despite the list of human rights complaints and strong criticism from many human rights organizations, the Ethiopian government has vowed to continue with its villagization program in the coming years.

The government has already moved 200,000 households into 388 resettlement centers. Anuradha Mittal, Executive Director of the Oakland Institute has said that it’s up to the officials of the World Bank, USAID and DFID “to swiftly re-examine their role and determine how to better monitor funding if they are indeed not in favor of violence and repression as suitable relocation techniques for the development industry.”

Ethiopia currently receives more foreign aid than any other country in Africa–over $3 billion a year–the major donors being the United States and the United Kingdom.