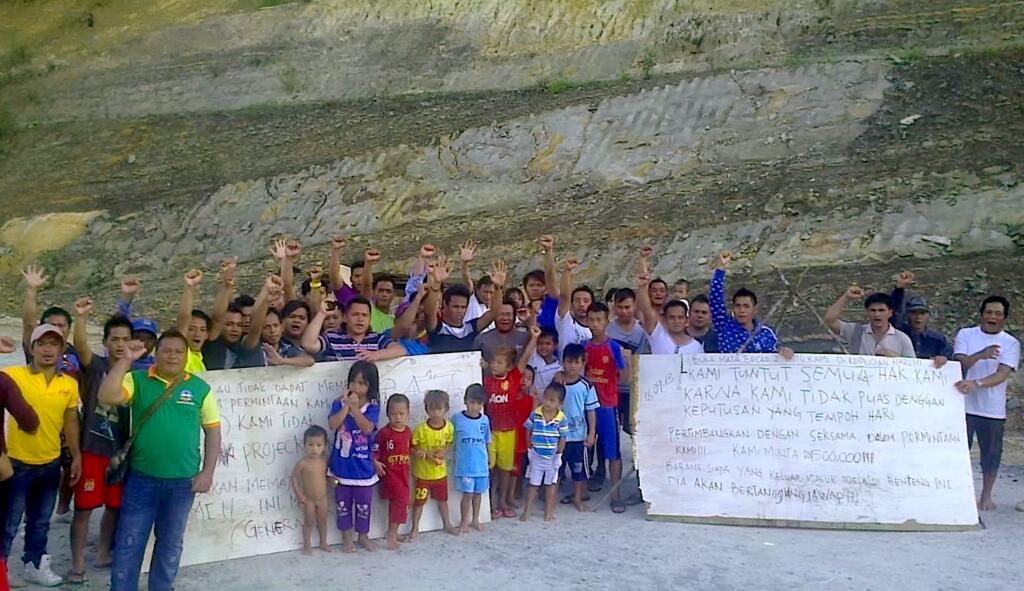 A large group of Penan Peoples have reinstated a blockade against the controversial Murum dam in the Malaysian state of Sarawak.

The blockade originally began in September 2012, when the Penan and Kenyah heard that they would be forced off their lands without fair compensation to make way for the dam’s reservoir.

The affected villagers quickly issued a set of demands in which they asked for adequate compensation for their resettlement and for the government to respect their rights under the UN Declaration on the Rights of Indigenous Peoples (UNDRIP).

As an initial response, the government established a police presence near the blockade and sent in sympathetic politicians to negotiate with the protesters. The government also started throwing out accusations that NGOs instigated the blockade–a claim that was thoroughly denounced by the Indigenous Peoples.

Despite the ridiculous rhetoric, the negotiations led to a voluntary suspension of the blockade. However, with Sarawak Energy and the government refusing to yield to the Indigenous demands, negotiations inevitably fell apart. In August 2013, the Penan was relaunched.

A second suspension of the blockade soon followed, with Sarawak Energy picking up the government line that “a certain NGO has been instigating and organizing a gathering on the site so that the people affected by the dam will not move to the resettlement villages.”

The accusation was addressed in a recent interview that was filmed by Peoples Documentary.

Nevertheless, the negotiations once again carried on, until the Penan of Long Wat–who would be the first to face the waters of the Murum reservoir–agreed on Sept. 4, 2013, to accept an offer of an extra MYR10,000 (US$3240) per family in exchange for their voluntary resettlement at Tegulang.

According to the Switzerland-based NGO Bruno Manser Fonds (BMF), “the controversial CEO of Sarawak Energy, Torstein Dale Sjotveit, accompanied the resettling Penan one week ago […] “Other affected communities, however, expressed that their leaders were not invited to the negotiations and renewed the blockade,” continues BMF.

The other villages are also willing to accept resettlement, however, it must be on the condition that each affected family receive 25 hectares of land, a distributed 10 per cent share in the profits from the Murum Dam and full compensation for their losses.

With the village of Long Wat seemingly out of the way, on Sept. 21, Sarawak Energy started filling in the reservoir without giving notice to any of the affected villages.

On Sept. 23, Peter Kallang, chairman of the SAVE Rivers network–whose members include several Kayan, Kenyah, Penan, and other Indigenous Peoples–further reported that the Penan village of Long Watt was burnt down under highly suspicious circumstances. According to the affected communities, several boats were also intentionally sunk. Employees of Sarawak Energy are widely believed to be responsible for both incidents.

Regardless of the culprits, the recent moves have everybody on edge, especially in light of the government’s decision in 2011 to permit the flooding of still-inhabited Kenyah and Kayan lands to make way for the equally controversial Bakun dam. As a result of that flooding, a sizable population of Kenyah and Kayan Peoples became stranded on suddenly formed “islands”.

BMF has since responded to the Murum dam flooding by calling on the UN Special Rapporteur for the Rights of Indigenous Peoples, James Anaya, “to urgently intervene with the Malaysian government and to ask for an immediate stop of the Murum dam impoundment. The international community is urged to pressure the Malaysian Prime Minister Najib Razak to put an end to the humanitarian crisis in Sarawak and to properly address all outstanding resettlement issues with the affected indigenous communities.”

SAVE Rivers and the affected villages have yet to issue a response of their own.