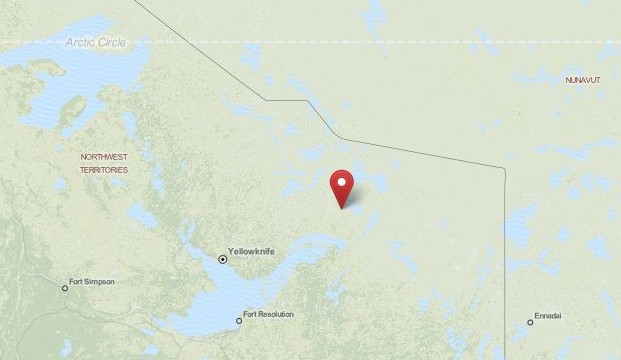 Indigenous Peoples’ Fight for the Future of Lake Kennady, The Caribou and Gahcho Kue

Some 288 kilometres South of the Arctic Circle an area known as Gahcho Kue–‘Place of the Big Rabbit’ in the Dene Suline language–sits in the barren grounds tundra surrounding Lake Kennady. This stark and beautiful landscape of shallow lakes and rolling ridges in Canada’s North West Territories has been significant to Indigenous Peoples for centuries. However, since 1995–when geological surveys were first conducted around the lake–uncertainty has been mounting over the area’s future.

The discovery of kimberlite deposits or ‘pipes’ (a rock well known for containing diamonds) beneath the earth attracted mining giant De Beers and Mountain Province Diamonds Inc. to launch a bid to mine at Gahcho Kue.

Despite numerous delays–and over a decade of complications–the fears of local Indigenous Peoples’ were realized after the Canadian Government and Aboriginal Review Board gave the go ahead for extraction at the diamond mine.

This decision came after the government authorities considered a new Environmental Impact Review (EIR) submitted by De Beers and Mountain Province via the Mackenzie Valley Environmental Review Board (MVEIRB). Although the project was found “Likely to cause significant adverse environmental impacts” it was decided that the economic gains would outweigh any losses.

Indigenous Peoples, including the Lutsel K’e Dene, Yellow Knives Dene and Tlicho feel very differently. In the wake of the decision to let the project move forward, all three First Nations issued a final plea to the federal government to stop the project, citing concerns over water quality, caribou migrations and the future of Lake Kennady.

If the project is allowed to go ahead, operations at three planned open pit mines will commence some time between 2014-2015. The mine would lead to the extraction of a projected 3 million tonnes of Kimberlite per year in order to obtain just 900 kg of diamonds over the same period. That measures out to some 33 million tonnes of kimberlite–not to mention vast amounts of topsoil–for 9,900 kg of diamonds over the estimated 11 year life span of the mine.

With production at the nearby Diavik and Ekati diamond mines slowing down, De Beers, Mountain Province and other interested parties are hoping this mammoth project at Gahcho Kue will offset any losses.

The objections arising from the local peoples and the project’s critics pertain both to the traditional use of the land for hunting Caribou and the general ecological damage that the mine would likely inflict upon the area.

Caribou are known to migrate in and around the proposed mining site in both spring and autumn. Interference with this migration would cause a significant loss to the cultures and economies of the Dene who have lived with and relied upon the caribou for centuries.

Caribou are also important to predators whose presence is essential for maintaining the healthy balance of ecosystems. The survival of these vital animals, who are already suffering huge declines, is at least in part dependent on them having access to their natural habitat–access that the mine would disrupt.

The First Nations are equally concerned about the future health of Lake Kennady and its vital fish populations.

Mining, wherever it occurs, raises serious questions over water quality due to the heavy reliance on toxic chemicals for extraction and processing. In the case of the Gahcho Kue mine, the potential impacts of such mine waste could be more serious. In order to access the kimberlite pipes that have been found to run beneath Lake Kennady, De Beers and Mountain Province plan to drain the southern portion of the lake using a series of dykes, ditches and ponds. They claim an eight year recovery plan after the mine’s closure will minimize any damage caused during the life of the mine. Despite satisfying the relevant authorities, the two mining companies have been unable to convince critical parties that their proposal will not cause unacceptable damage to the lake and local water sources, severely impacting the ecosystem as a result.

Lutsel K’e Dene, Yellow Knives Dene and Tlicho Peoples’ assert that the recently accepted Environmental Impact Review does not adequately address these issues, and that the mine will provide no clear benefit to people in the area. They are now asking the Minister for Aboriginal Affairs and Northern Development to order further review of the plans.