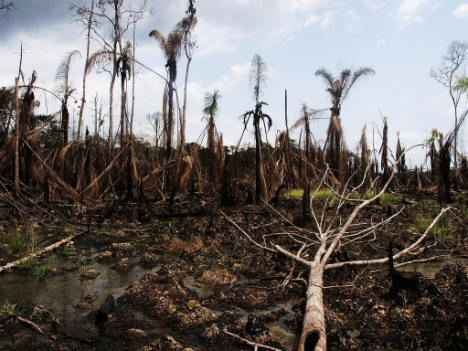 Shell Petroleum Development Company Ltd of Nigeria (SPDC), Shell for short, recently received a report titled “Sustainable Remediation and Rehabilitation of Biodiversity and Habitats of Oil Spill Sites in the Niger Delta” from its partner – the International Union for Conservation of Nature (IUCN). The document dated July 2013 is also tagged as “a main report including recommendations for the future.”

In a critique of this report sent to the IUCN, Professor Richard Steiner, an expert on oil and marine issues, raised a number of concerns of which we shall turn to in a moment. But we hasten to note that the overall picture of the report is one that treats the desperately polluted situation of the Niger Delta in a way that indicates that Shell is up to nothing but more prevarication and time-buying while they get on with profiteering from their high impact exploitation activities.

In its unsigned ‘preface’, we are told that the report sets out the “panel’s overall strategy for sustainable re-mediation and sets the scene for the other two objectives of the panel’s work: to ‘develop a strategy to safeguard the Niger Delta’s remaining areas of biodiversity’ and ‘build capacity with local organizations.” It also says that ‘now that the recommendations contained in this report have been proposed, SPDC can soon start on the planned set of field pilots, based on specific advice from the panel and monitored by the panel over the next two years’.

The statement also indicates that Shell intends to take tentative steps towards re-mediation over a period of two years. Recall that the UNEP report stated that Ogoni waters would require thirty years to be cleaned up. By this report, Shell has extended that to thirty-four years if we take into account the two years of inaction that have already passed.

We should state here also that partnerships between conservation agencies and oil companies have often ended up with the polluters using these engagements for no other purpose than green-washing. It was for the reason of IUCN’s partnership with Shell that Friends of the Earth International (FoEI), at its biennial general meeting held in Honduras, October 2008, voted to relinquish its membership of the IUCN.

A reading of this report emanating from the partnership of IUCN with Shell validates FoEI’s position and shows that the conservation body is enjoying a ride on the back of the tiger.

The report is careful not to mention that this panel was set up in the wake of the UNEP report of the assessment of the Ogoni environment that issued a damning verdict of Shell’s atrocious behaviour in Ogoniland. The UNEP report stated categorically that the oil company acted below its in-house standards and neither kept to international standards nor the Environmental Guidelines and Standards for the Petroleum Industry in Nigeria (EGASPIN).

The IUCN report now shamelessly states: “SPDC has implemented its re-mediation measures to meet the Environmental Guidelines and Standards for the Petroleum Industry in Nigeria (EGASPIN) standards.” This claim is contrary to what the same report reveals when it states that “in a recently concluded re-mediation site in Soku, the hydrocarbon levels were higher than the EGASPIN standards of 2002, even though all the authorities has signed off on the certificate for a clean bill of health for that site.”

The report makes a case that because the EGASPIN standards are generalized and not ecosystem specific as in the USA, Canada and the Netherlands, it means that standards may be stricter or less for certain locations. The report then takes the role of the lawmaker and urges Shell to disregard the laws of the land and follow “suggested target levels indicated in Annex II as a guide for monitoring ecosystem recovery, until site specific standards are established for the Niger Delta ecosystem.”

It is not a surprise that the names of the writers of this report and the members of this IUCN/Shell’s Niger Delta Panel are not listed in the publication. It would help observers to discern better the basis for some of the claims made in the report including why certain areas could not be visited for reasons of the access roads being cut off by floods and for security concerns.

In reviewing the report, Prof Steiner, who has done extensive work on the Niger Delta environment and is a renowned expert on the Exxon Valdez oil spill that occurred in Alaska, among others, stated plainly that the report “fails to meet its professed objectives, presents little new information, contains inaccuracies, represents a flawed process, and seriously undermines the credibility of IUCN.”

In an earlier communication to top leaders of IUCN on 11 September 2011, Prof Steiner had said: “I read through the TORs for the project, and with respect to whomever drafted them, this is simply one of the most uninformed documents I have read on the Delta, and I have read many such things. They reflect a profound misunderstanding of what is actually occurring in the Delta, and a part-and-parcel of Shell’s fiction about the issue.

Further, it is difficult to believe that a company that netted over $100 billion in after tax profits over the past 4 years does not know what it should be doing to behave responsibly in the Niger Delta – they do, but they just make too much money not doing so. I am concerned that Shell simply wants green validation from IUCN for their irresponsible activities in the Delta, and it most certainly does not deserve such. And, it seems evident that, through projects such as this, Shell is attempting to continue delaying responsible action in the Delta. Shell used the 4-year UNEP Ogoniland study to successfully delay action, and now are looking to use IUCN for another few years delay”.

Prof. Steiner also notes that the IUCN-Shell panel further plays the famous script that criminalizes local people by blaming repeated spills on “anthropogenic activities – especially oil theft and illegal refining.” They also annoyingly hinge this on what they term the “quick money syndrome” afflicting the community people. Prof. Steiner is of the opinion that the quick money syndrome in the Niger Delta is that of Shell, the other oil companies and the government.

We note that at the recently held conference on oil thefts organized by the office of the Special Adviser to the President on Niger Delta, Shell’s representative admitted that the major oil thefts going on in the Niger Delta are of “industrial” scale. Industrial cannot be construed to be “artisanal” or to be referring to local communities.

Among many notes, Prof Steiner points out that: “The report inaccurately states that ‘the vast majority (about 97%) of PAHs (polycyclic aromatic hydrocarbons) in produced water are of BTEX (benzene, toluene, ethylbenzene and xylene)’. But these are not PAHs, and this error exposes a poor grasp of petroleum chemistry.” In addition, he highlights that that the panel contradicts Nigeria’s legal requirement when it says that a response time of 48 hours for Tier III spills is “not feasible for SPDC.”

In what he terms “preliminary conclusions,” Steiner said: “In a normal client/contractor relationship, a client would likely conclude that the final report of the contractor – IUCN-NDP – was not fit-for-purpose, and either request substantial amendment with more detail, or request its money back. This is not a normal client/contractor process. Shell received precisely what it wanted from this process – a few more years to make $ billions from oil in the Niger Delta, not have to upgrade its oil infrastructure to international standards and not have to correct its irresponsible business practices, and now will be leaving the area.”

And so the game goes on; two years after the UNEP report on the Ogoni environment had clearly exposed the death warrant oil activities had issued on the unsuspecting people. With government foot-dragging over the mater of the clean-up of Ogoni land, Shell and its partners prefer to go to Afghanistan (to recall a phrase coined by veteran writer, Sonola Olumhense, for when we avoid dealing directly with issues at hand but dance elsewhere).

Meanwhile the Niger Delta environment lies comatose while the oil companies continue to pollute and profiteer. It is also in this context that we consider any attempt by oil companies like Shell to sell off onshore fields and swim into the swamps and offshore as unethical and unacceptable. This should not even be whispered until after they have cleaned up the mess they have already caused and fully pay up for all liabilities accumulated through their years of unacceptable behaviour.