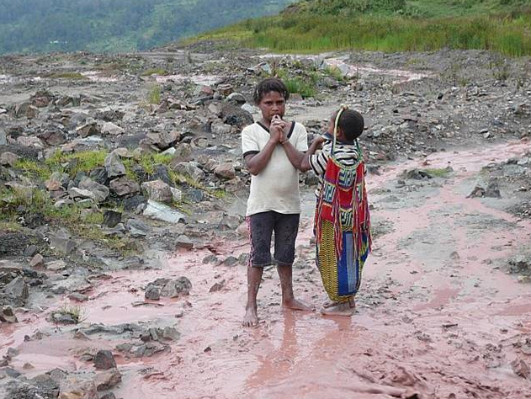 Sept. 30 – Recent killings linked to Canadian-owned nickel mine in Guatemala – Two Maya Qeqchi have been killed and more than a dozen injured in two separate attacks this week, near the site of a Canadian-owned nickel mine in El Estor, Guatemala. Leading up to the attacks, on September 11, the Qeqchi communities of El Estor condemned and rejected the company’s presence in their territory.

Sept. 29 – Indigenous peoples denounce illegal searches of homes by security forces of OceanaGold – An alarming situation continues in the upland village of Didipio, in the province of Nueva Vizcaya, Philippines, where Ifugao indigenous peoples live. Homes of Ifugaos known for their anti-mining sentiments were searched without warrants by security personnel of a mining company.

Ecuador’s Indigenous movement Mobilizes for the Water – A National, inclusive, non-discriminatory and peaceful effort, the “Mobilization to defend the Water” (Movilización Nacional para defender el Agua) officially began this morning in Ecuador, at 12:00am (0500 GMT).

Sept. 27 – Yuracare People, coca farmers clash over land in Bolivia – Indigenous groups and coca leaf farmers clashed over control of land in a national park in northern Bolivia, killing one person, local media reported on Sunday. Indian groups that have land rights in the remote Isiboro National Park in Beni have long complained that hundreds of coca leaf growers have been clearing forests inside their territory to grow coca, the raw material for cocaine.

Sept. 25 – Auction of Davao mine stopped by indigenous groups – BIDDING FOR a 20,000-hectare copper and gold mining project in Davao del Norte was postponed by a state-led firm following a restraining order issued by the National Commission on Indigenous Peoples (NCIP). NCIP’s issued the order, citing the lack of “free and prior informed consent” from indigenous groups.

Sept. 22 – Argentina: Mapuche seeking solidarity over “imminent eviction” – The Mapuche community of Lonko Purran may now be facing eviction after a peaceful confrontation last week with the US-based company Apache Oil. The company tried to enter their oil concession, a part of Lonko Purran’s territory, on September 14. However, they encountered a roadblock setup by the Mapuche. The community is deeply concerned that their eviction is now imminent.

Another Brazilian Indian community attacked and torched – In the early hours of 18 September, the Guarani Kaiowá community of Apyka´y in Brazil was attacked by ten gunmen, who fired shots in to their camp, wounding one Indian. The gunmen also beat up and injured other Indians with knives and then set fire to the Indians’ shelters.

Sept. 19 – Ogiek elders offer conservation skills to Kenya government – The Ogiek community — the original residents of the Mau Forest — on Tuesday said it was ready to offer its traditional conservation knowledge to save the Mau. The entire Ogiek population, an est. 20,000 people, is currently facing eviction from the forest.

Hualapai Tribe Renews Uranium Mining Ban – The Hualapai Tribe has renewed a ban on uranium mining on its land near the Grand Canyon, joining other American Indian tribes in opposing what they see as a threat to their environment and their culture.

Sept. 18 – Malaysian police tear down Penan tribe’s anti-logging blockades – Malaysian police said they dismantled blockades constructed in the Borneo jungle by the Penan, who were protesting ongoing logging and plantations on their ancestral land. In a separate move police also arrested 17 people, including Penan and others, for mounting a demonstration against a proposed dam in Sarawak state on Malaysian Borneo which will force mass relocations.

Sept. 17 – Guarani Village torched by unknown assailants – On September 14, a community of 130 Guarani-Kaiowa People watched on as their village, near the municipality of Rio Bright in Brazil’s Mato Grosso do Sul, burned to the ground. The Guarani were not in the village at the time, having been forced abandon their land on September 11.

Sept. 16 – Mine Gets OK to Turn Alaska Lake into Waste Dump – (US) Recent federal rulings permitting a gold mining company to dump toxic waste into a pristine mountain lake in Alaska could have widespread ramifications for rivers, streams and lakes in the US.

Sept. 11 – New Canadian mine threatens Saami way of life – The Saami people say a mining project in Northeastern Sweden, proposed by a Canadian company, threatens their traditional way of life and violates their basic human rights, as recognized by the United Nations.

Sept. 10 – Venezuela: Yukpa to “finally” receive communal property rights – Interior & Justice (MIJ) Minister, Tarek El Aissami has announced that Yukpa indian communities living in the Perija Sierra (Zulia) will finally start receiving communal property rights in October. However, it would appear that there is still some debate and dissension about the extent of lands belonging to Yukpas and other indigenous groups in the area.

Mapuche conflict continues to flare in S. Chile – Violence and standoffs around the Region’s highways, farms and government offices marred the occasion, as representatives of the central government announced new plans to help the economic recovery of the country’s most depressed region.

Sept. 5 – Colombia: 300 Awa displaced due to post-massacre threats – 300 family members of the 12 indigenous Awa massacred last week continue to be harassed and threatened despite moving out of the area, according to the National Indigenous Organization of Colombia (ONIC). The massacre was carried out on August 26.

Sept. 4 – Peru: Amazon Leaders issue ultimatum to Canadian company – Leaders from the Awajun and Wampis People, in the Cordillera del Condor region of Peru, issued an ultimatum on Aug. 25 giving Dorato Resources Inc. 15 days to leave their territory. The Awajun and Wampis say that Dorato, a Canadian-owned mining company, entered their territory without their expressed consent. And now they want them out.

Quebec Innu wage battle to halt huge hydroelectric project – Nearly 40 years after Cree and Inuit won an injunction to stop the massive James Bay hydro project, an Innu community is waging a similar battle against Hydro-Quebec, the province and the federal government to halt another major hydroelectric project on Quebec’s Lower North Shore.

Sept. 3 – Sleeping by the ashes of Vedic Village – There is somewhat of a mystery surrounding the ashes of Vedic village—what remains of the upscale five star tourist resort near Kolkata, West Bengal, after it was set ablaze on August 23.

Platinex Prevented from Landing on KI Land – A boat and a canoe outside of Kitchenuhmaykoosib Inninuwug (KI) First Nation prevented a plane from landing on Nemeigusabins Lake, the First Nation’s traditional territory. The plane was transporting Platinex mining employees with the aim of conducting mineral surveys on KI land.

Sept. 1 – Algonquins peacefully block logging until agreements and leadership respected – This afternoon members of the Algonquins of Barriere Lake will peacefully block the machines of Abitibi-Bowater forestry workers, preventing logging in their territory until Quebec implements agreements covering forestry on Barriere Lake’s lands, and the Quebec and Canadian government’s recognize the First Nation’s legitimate leadership.

Loliondo is Burning – An “anonymous” report on the recent eviction of Massai in Loliondo, northern Tanzania. In July 2009, during one of the worst droughts in recent Tanzanian history, the government of Tanzania began to forcefully evict the Maasai from their traditional lands. Eight villages were burnt to the ground, along with crops and traditional places of worship.