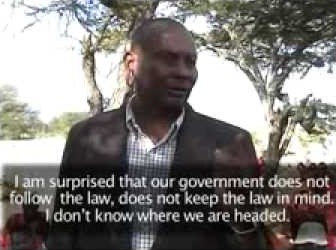 Loliondo is Burning provides documentary evidence, testimony, and background information surrounding the recent eviction of Massai in Loliondo, northern Tanzania. This is a two-part video.

In July 2009, during one of the worst droughts in recent Tanzanian history, the government of Tanzania began to forcefully evict the Maasai from their traditional lands. Eight villages were burnt to the ground, along with crops and traditional places of worship. As a result, some 3,000 people were left without any shelter, food or water.

As Loliondo is Burning explains, the evictions were carried out on behalf of the Ortello Business Company (OBC) and the Royal Family of Dubai, who claim the Maasai land as their own. Employees of OBC reportedly took part in the eviction.

Several abuses were also reported to have taken place, including the rape of Masaai women. Overall,

It should be noted that the eviction is ongoing. Other burnings have reportedly taken place since July. Further, more than two dozen Maasai have been arrested, some as recent as 7 days ago.

For more information on the current situation, please read the report “Gross violations of human and citizenship rights in Tanzania” by the Feminist Activist Coalition. You may also want to see:

If you would like to speak out in support of the Masaai, send an email to:

Thanks to Derek Wall for his reporting on Another Green World