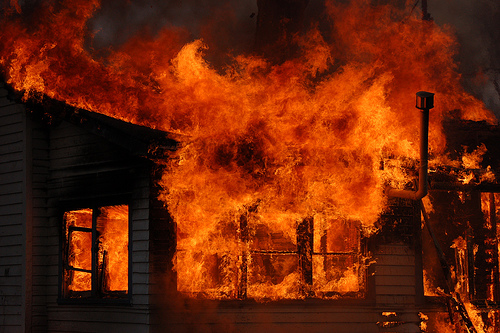 Sleeping by the ashes of Vedic Village

There is somewhat of a mystery surrounding the ashes of “Vedic village”—what remains of the upscale five star tourist resort near Kolkata, West Bengal, after it was set ablaze on August 23.

Most reports say an “irate mob” set the fire after a local soccer match between employees of Vedic village and another resort. The two teams apparently started fighting each other after the winner was declared.

The fight literally turned into a war, with both teams shooting guns and throwing “crude bombs” at each another.

While the fight was going on, the Vedic Village team apparently sought refuge in the resort, at which point, someone set it on fire. “The entire 5,000 sqft club-house, including the reception, the gaming room, library and two conference halls… some farmhouses,” and dozens of surrounding cottages were burned.

There is, however, another side to this story that is getting almost no coverage by the press. It begins with a group of farmers being terrorized and forced into giving up their land to a realty agency, Vedic Realty.

After the farmers were dispossessed of their lands, some 30 years ago, the government stepped in an took it back. Apparently, Vedic never received “legal authorization” to hold the lands.

The government quickly turned around and approached Vedic for an out-of-court settlement, offering to sell them the land. They should have challenged the ruling. Vedic, naturally, was more than happy to accept the offer, after all, it meant they would now be the legal owners of the land.

Over the years, Vedic Village made quite a name for itself. News agencies proudly inform us of its luxurious marvels, how it was “carefully designed for five-star ambience, without compromising the village ideal;” how it provides tourists and movie stars alike with all the wonders of modernity: “a bar, restaurant, a lotus-shaped pool”. It even has games for the kids while you play a nice round of golf. “It doesn’t get any better than this.”

However, beneath the surface of Vedic Village, stood a seething monster. The resort was “a den of criminal activities ranging from prostitution to bomb-making,” says Partho Sarathi Ray from the West Bengal activist group, Sanhati.

The last few years has been especially difficult for the villagers, because they were now forced to bear witness to constant, disruptive forces while “stories of what the rich and famous did in their leisure time filtered into the village, provoking wonder and then, disgust,” adds the Times of India. All the while through, the villagers held on to the memory of how their land was criminally taken away from them.

Acknowledging this legacy of suffering—that ranged from violence and dispossession to segregation, aural abuse and the constant disruption of their daily lives—it is certainly possible that Vedic village was burnt to the ground, not because of a group of mad sports fanatics, but because the lawful owners of the land finally took matters into their own hands.

Whatever the case, atleast this story is finally out in the open. And maybe, just maybe, the villagers will get to sleep and live like they would before everything was taken. Peacefully.