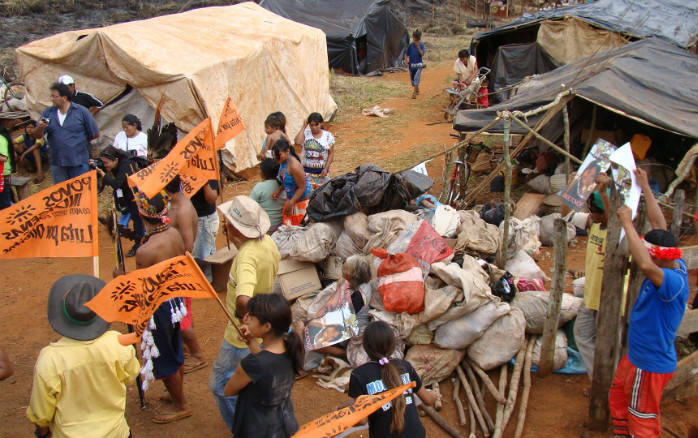 Three nights ago, on September 14, a community of 130 Guarani-Kaiowa People watched on as their village, near the municipality of Rio Bright in Brazil’s Mato Grosso do Sul, burned to the ground.

The Guarani were not in the village at the time, having been forced abandon their land on September 11, by order of the 3rd Regional Federal Tribunal.

The community, receiving no government support, was left without any access to food or alternative shelter, leaving them with choice but to set up a degrading “roadside encampment” along the BR-163 highway—-also known as the soy highway.

This makes the 21st indigenous roadside encampment in Mato Grosso.

There was little the Guarani could do as their village burned, along with the rest of their belongings. And they didn’t know what else to expect. For all they knew, they themselves were going to be attacked. The concern turned to fear as people driving down the highway began getting out of their cars to see what was going on.

Fortunately, no physical harm came to the community, but they were “stunned” by the event, says one Guarani leader. Speaking to CIMI, the indigenous advocacy branch of the National Conference of Brazilian Bishops. The reason, the leader explained that it wasn’t just their houses and property that burned “but also the spirits who lived with them.”

Despite the trauma, “some indigenous people still ventured to go to the old village to rescue small animals,” such as chickens and dogs, CIMI adds. But most of them had been killed. “The entire community spent the night without sleep, for fear of attacks.”

Just prior to the eviction, the Guarani were waiting for the land to be demarcated. According to Survival International, the community was initially evicted from their ancestral land “…in the 1960s by cattle ranchers who have occupied the land since then, ” while the Guarani themselves were reduced to living as guests on an overcrowded reserve.

Then, in December 2007, the community walked back on to their land and reclaimed it. A month prior to this, FUNAI, Brazil’s department of Indian Affairs, and the Federal Public Ministry (MPF) agreed to carry out a set of required anthropological, historical and environmental studies to initiate the demarcation process.

Those studies began on August 1, 2008. “However, some days later, on August 6, the work became virtually impossible after some… members of the Technical Group were threatened by gunmen during their fieldwork,” CIMI explains. This marked the beginning of a “strong campaign.. by state governor André Puccinelli, politicians and large-scale landowners to suspend the studies.”

This campaign eventually included Private security forces, hired by the land’s titleholder, to keep the Guarani “under constant armed surveillance”. Government authorities were also prevented from accessing the land, along with Medical teams from the National Health Foundation (Funasa) were also blocked . This directly resulted in the death of two Guarani children who needed medical attention.Three more youths committed suicide as result of the “constant pressure, threat of eviction and lack of social assistance,” CIMI concludes.

And now? The Guarani sit by the side of a road, waiting.

What you can Do

1. Survival International has set up the Guarani Survival Fund, in association with Marco Bechis (director of Birdwatchers), to support the Guarani. All the money donated will go towards helping the Guarani to defend their rights, lands and futures.

2. You can Write a letter to Tarso Genro, Brazil’s Minister of Justice, in support of the Guarani