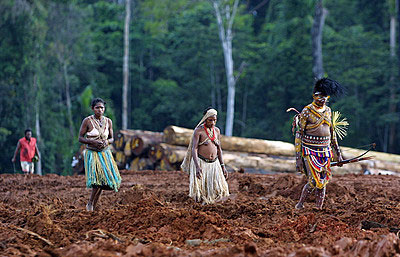 Aug 30th – Return to Tarmageddon – You’ve likely heard about the tar sands in northern Alberta. You’re probably familiar with the devastation—environmental and social—this megaproject has brought to the land. Maybe you even have a relative who lives or works there. There’s less chance you’ve heard of the tar sands in the Republic of Congo.

Aug 27th – Australia: UN calls Indigenous intervention discriminatory – The United Nations has affirmed what we’ve always known: The so-called intervention, which began in 2007 under the guise of saving the children is racist.

Another massacre of Indigenous People in Colombia – Yesterday, a group of armed men dressed in military uniforms, without insignia and wearing masks, fired indiscriminately at the house of an Awá family.” At least twelve people were killed, including three children. This is the secons Massacre of Awa People this year.

Aug 26th – Platinex is going to enter KI territory – The Canadian mining company Platinex said it wants to try and push its way onto KI territory again, despite the First Nations staunch objections. The company is expected to arrive some time today (August 26).

Aug 24th – Maasai evicted and imprisoned for hunting concession – According to Survival International, eight Maasai villages were burnt to the ground last month—leaving 3,000 people without any food, shelter, or water.

Logging protests spread in Borneo as nomads block roads – Protests by the Penan tribe in Borneo have escalated, with twelve villages coming together to mount new road blockades against the logging and plantation companies that are destroying their rainforest.

Aug 19th – Peru government’s getting sued over La Oroya – Peruvian citizens can hardly depend on their own Judiciary to demand for social justice. Judges in Peru are too busy these days prosecuting Indigenous leaders and over 1,000 thousand community activists, for “committing the crime” of fighting for equality.Fortunately, there are international courts and environmental non-profits that will look after our people’s rights.

Aug 10th – Jarawa: “Are we here just for your amusement?” – Barefoot India, a major Indian travel company, has just won a high court case that will allow it to build an eco-resort close to the designated Jarawa reserve. Other hotels are expected to follow. In effect, the Jarawa People, who have lived in voluntarily isolation for centuries, are bring made into a tourist attraction.

Aug 9th – Malaysian indigenous peoples call for plantations moratorium – Today is the International day of the Indigenous Peoples of the World as being declared by the United Nations. In commemorating this significant day, with a united voices we call on our respective State governments to stop large-scale plantations and other extractive activities on our indigenous lands until effective measures to safeguard our rights and the environment are in place.

Aug 7th – Emergency Support needed for the Ogiek – Unless the international community can pressure Kenya to respect Indigenous Rights, as many as 20,000 Ogieks will be evicted from their traditional lands in September. Also see: http://www.ogiekpeople.org/

Mapuche communities mobilize to reclaim land – On July 23, the Mapuche began to reclaim lands in Araucania, central Chile, that they say were stolen from them. At least 5 Roadblocks have been set up.

Tens of Thousands Join Protests for Democracy in the Forests – Throughout India, tens of thousands of Indigenous People are demanding and end to the brutal and repressive laws surrounding India’s forests. More than 2 dozen protests have been organized.

Aug 1st – Thousands targeted in India’s “hidden” resources war – The malevolent activities of Indian-origin companies (such as Jindal, Esssar Steel, Tata and Vedanta) are often ignored – whether inside or outside India – in a naive belief that regulatory constraints are being applied to their activities. Likewise, the myth continues being propagated that India’s military, police, and politicians usually answer to the law.

Justice for the Lubicon Cree – “For us, it’s not a question of asking for land. We know it’s our land. The problem is that the province figures it’s theirs and they keep issuing licenses – permits to the oil and gas industry and also to the logging industry. It’s been a long, hard struggle. They’re finding more and more oil and gas and now we’re talking tar sands.”