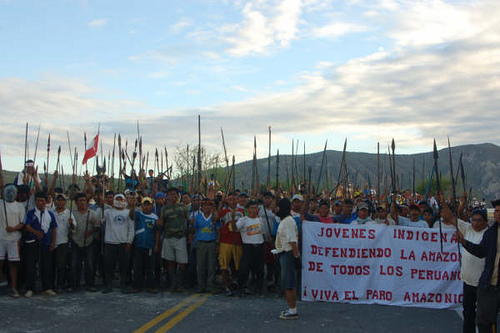 Leaders from the Awajun and Wampis People, in the Cordillera del Condor region of Peru, issued an ultimatum on Aug. 25 giving Dorato Resources Inc. 15 days to leave their territory.

The Awajun and Wampis say that Dorato, a Canadian-owned mining company, entered their territory without their expressed consent. And now they want them out.

As noted on the WW4Report, the ultimatum follows a recent gathering of Awajun and Wampis leaders in the town of Imacita, Amazonas. A resolution (ES) was authored at the end of the gathering, which formally rejects Dorato’s presence.

The resolution, which outlines a series of issues and concerns, also demands the Ministry of Energy and Mines to stop handing out concessions in the Cordillera del Condor and respect their “rights to life,” their health, the region’s biodiversity and their sacred sites.

It also announces support for UN Rapporteur James Anaya’s proposal for an international commission to investigate the events in Bagua three months ago, on June 5, 2009.

The Awajun and Wampis, you may recall, were the ones camped along the Fernando Belaúnde Terry road in Bagua when the police attempted to remove them by force.

In the days leading up to the attacks, both the Awajun and Wampis had agreed to take down their blockades and return home. Many had already done so when the police made their move.

It’s something that didn’t have to be, much like the Awajun and Wampis own eviction order. A sort of “needless full circle.”

Everything could be worked out with ease, and nobody would have ever lost their lives if only the government had the strength to uphold and defend the rights of Indigenous People.