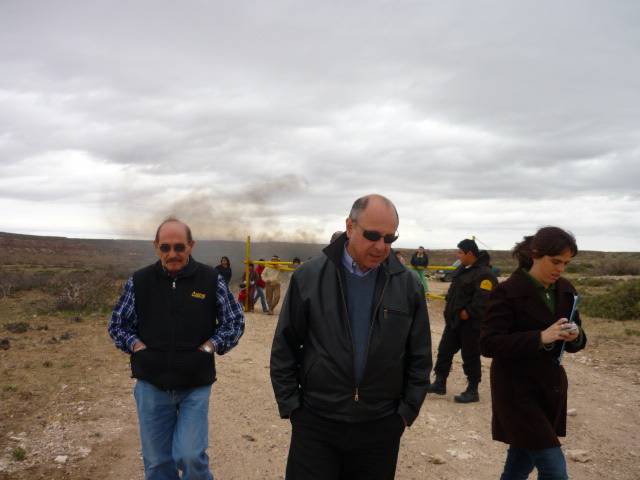 The Mapuche community of Lonko Purran may now be facing eviction after a peaceful confrontation last week with the US-based company Apache Oil.

Apache tried to enter their oil concession, a part of Lonko Purran’s territory in the Neuquen district of Argentina, on September 14. However, upon their arrival they encountered a roadblock setup by the Mapuche. Apache had no choice but to walk away.

A member of the community recently explained (ES) that the company arrived with former Supreme Court Judge Eduardo Badano, who claimed to have bought into the land at a public auction. Before walking away, Badano warned the attending Mapuche that “they would enter the same way they left.”

The Mapuche are deeply concerned that thier eviction is now imminent and they are looking to the international community, particularly organizations in North America, for solidarity and support.

A day after the encounter, on September 15, the Mapuche Confederation of Neuquen released a formal statement of support, denouncing Apache oil, as well as Eduardo Badano and the Governor of the Province of Neuquen, for their roles in suppressing, ignoring, and violating Mapuche Rights.

Roughly translated to English, the statement explains that the Mapuche have been blocking the concession for the past two years, after “harsh repression in 2004” as well as lawsuits and political persecution brought on by the company.

Lonko Purran has faced similar conflict with another US company, Pioneer Oil, who Apache bought out in 2006. Pioneer moved on to the Mapuche’s land—without the community’s awareness or consent—in 2001. According to Indian Country Today, the company waited until “the entire Lonko Purran community had left for the season to graze their animals in the hills.” Once they were gone, Pioneer immediately got to work.

When the community found out, they surrounded the company’s oil wells in protest, an action that Pioneer sought to “resolve” in court. As far as they were concerned, the peaceful action was illegal.

However, the court saw otherwise, ruling that the Mapuche had a right based on ILO Convention 169 to demonstrate on their own territory. The court also threw out all charges against the Mapuche.

The ruling was seen as a massive victory for the Mapuche and all marginalized peoples in Argentina. But even so, it had little impact on Apache. Now there’s no telling what will happen. The Mapuche fear the worst.

Get in touch with the Mapuche Confederation of Neuquen by email cmnidentidadwijice@gmail.com or by calling 02972-420657.