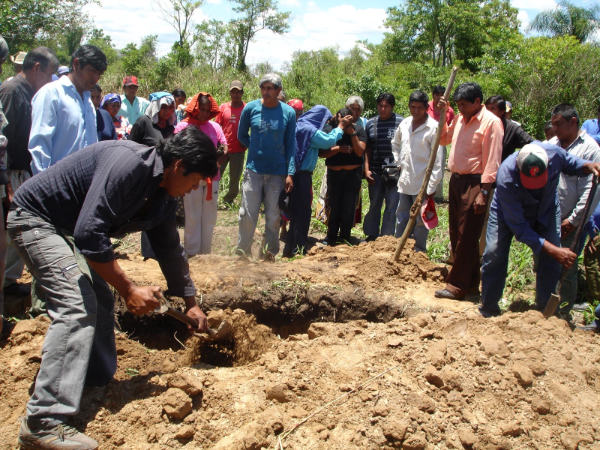 Guarani Representatives from Argentina, Bolivia, Paraguay and Brazil, gathered in Paraguay for the Third Continental Meeting of the Guarani People. Focusing on the topics “Land-Territory, Autonomy and Governance,” the Guarani agreed after four days to consolidate their organizations and found a Continental Council for all Guarani Peoples. They also agreed to begin participating in all democratic processes and increase awareness of the Guarani Nation, with its cosmovision and life project, drawing from their identity and culture.

The Mohawk Council of Kanesatake, the Union des Producteurs Agricoles (UPA) of Deux-Montagnes and a coalition of committees formed by local citizens in Oka, have joined forces to oppose a new niobium mine owned by the mining company Niocan. The company previously claimed that they obtained social acceptance for their project, which would last about 17 years.

Police in Argentina shot and killed two Indigenous Tobas, and arrested more than 2 dozen others at a blockade site in the northern province of Formosa. According to media reports, the Toba set up the blockade 4 months ago to demand the return of some land. But no one ever visited them until last week, when 100 police officers showed up, according to one Toba leader, with the “intention of killing.” One police officer also died in the clash. Further reports have been released indicating that the police violently assaulted women, arrested children as young as four, and possibly burned down 20 houses. As well, the group of arrested Tobas allegedly had “hot water” thrown on them to prevent them from sleeping. They have since been released from prison.

More than 200 Indigenous organizations and 79 different nationalities came together in La Maria Piendamó, Cauca, Colombia for the First Continental Summit of Indigenous Communication in Abya Yala (the Americas). Delegates at the four-day Summit discussed a wide range of issues, including the Rights of Mother Earth, collective rights to communication and the distortions of institutionalized media. In their final declaration they also outlined a detailed plan to create a Continental Indigenous Communications Network.

Plans are under way to develop an oil field less than two miles away from Bear Butte in western South Dakota. Known as Mato Paha to the Lakota Peoples, Bear Butte is a sacred site that currently has four National Designations for protection. The risk of oil spills, leaks and accidents at the proposed site could greatly affect local wells and water supplies, as well as migratory birds and endangered species at Bear Butte Lake, a National Wildlife Refuge. A petition has been set up in support of Mato Paha.

A Costa Rican court struck down a mining concession granted to the Canadian company Infinito Gold and ordered the company to pay environmental damages. The resounding victory puts an end to the company’s open-pit gold mine at Las Crucitas. According to the Tico Times, the court also ordered the Public Ministry to open a criminal investigation of former Costa Rican President Oscar Arias for signing off on a decree that prioritized the mine as being in the public’s interest. The court determined that the decree was illegal.

Twelve Mapuche prisoners, who are on trial in the Chilean city of Canete, announced that they are resuming their hunger strike. “The Mapuche who have resumed striking are doing so because the Chilean government has not adhered to the promises it made to Mapuche leaders previously–at the close of the previous hunger strike,” states the Project for Indigenous Self-Determination.

A B.C. Supreme Court judge ruled in favour of the Sinixt Peoples, stating that no logging should take place until a constitutional challenge is resolved. Long considered extinct by the federal government, the Sinixt had set up a wildlife protection camp that doubled as a blockade to stop a B.C. company from entering its Perry Ridge timber site. The site is located in the Sinixt’s traditional territory. Following the ruling, the Sinixt agreed to take down their blockade. They are now working to make sure the government properly consults them, in accordance with federal law.

New Mexico Governor Bill Richardson signed an Executive Order extending greater protection to the sacred Zuni Salt Lake and Sanctuary. “The Zuni Salt Lake is a site of great cultural and religious importance to the people of Zuni and many other indigenous peoples throughout New Mexico and Arizona,” said Governor Richardson. “My action today will promote a collaborative relationship between state agencies and the Zuni Tribe to safeguard the unique historical and cultural significance of this sacred place.”

33 villages were reportedly burned to the ground in the Kokrajhar district of Assam, India, displacing roughly 1,200 families. According to the Adivasi Network, 200 men from the government’s forest department entered the villages on Oct 30-31 and began torching houses, food stocks, schools and churches. They also took livestock for themselves and molested several women that protested the eviction.

Members of the Waycobah Nation (Mi’kmaq) expressed concerns over a potential hydraulic fracturing project near Lake Ainslie, the largest freshwater lake in Cape Breton. Hydraulic fracturing or “fracking,” as industry likes to call it, is a notoriously toxic process that involves the use of hundreds of different chemicals which can poison local water supplies. The Mi’kmaq are worried that the drilling will contaminate Lake Ainslie and the nearby Skye River which runs directly through the Waycobah’s reserve.

In Panama, leaders of the incumbent General Congress, which is backed by the leadership of most Ngobe People, withdrew their recognition of the national government and refused to have any further dealings with them. The Ngobe want the government to modify or replace the country’s present constitution which was imposed during the previous military dictatorship. The constitution completely removed the Ngobe’s land rights. Among other issues, the Ngobe are also concerned about Executive Decree No. 537, issued this year, which limits the right of the Indigenous Peoples to elect their own leaders according to their own traditions.

The Canadian government turned down the contentious Prosperity copper-gold mine in central British Columbia, citing environmental concerns. The project would have turned the pristine Fish Lake–known to the Tsihlqot’in as Teztan Biny–into a mine waste dump site. Not so surprising, the government approved another contentious mine, the Mount Milligan gold mine, the very same day. The cancellation of the prosperity mine sent shock waves through Canada, including the resignation of Premier Gordon Campbell and allegations of insider trading.

Indigenous leaders and activists from across Venezuela marched through Caracas to demand that President Hugo Chavez’s government demarcate and recognize their ancestral lands. The country’s constitution, approved in 1999, guarantees collective ownership of indigenous lands and guarantees representation in congress. However, in several cases the government has avoided taking any action to recognize the lands and issue the Indigenous People formal land titles.

As many as 17,000 Cultural Sites, including petroglyphs and extremely large earth drawings known as geopglyphs in southern California may soon be destroyed thanks to Chevron, Solar Millenium, Florida Power and Light, Next Era™ and various other companies. Now held in trust by the BLM (Bureau of Land Management), these sacred sites are being cast aside so the companies can build massive solar projects. Demands have been sent out to designate the entire area a cultural preserve.

According to a statement issued by the Congress of World Hmong People, the Lao PDR government is pursuing an agenda to “‘clean up’ a 35-year history of killing fields in the Xaysombun Special Zone, in an attempt to cover-up their acts of violence against the Hmong ChaoFa Indigenous.” The Lao government denies the 35 year campaign of ethnic cleansing and the Congress is gravely concerned that now the government will simply extinguish all Hmong ChaoFa.

In northeastern Quebec, the Innu threatened to mount an international public relations campaign against Hydro-Quebec unless the province-owned company starts dealing with them responsibly. Innu leaders said that they want a treaty with the Quebec government to make sure their livelihood is protected before La Romaine hydro project goes ahead. Otherwise, the leaders warned, there could be protests, lawsuits, and a PR campaign that would tarnish the image of Canada and Quebec.

The Subanen People won a major victory in their struggle to protect Mt. Pinukis in the province of Zamboanga del Sur, Philippines. After discovering mining equipment on the road to the mountain, the Subanen quickly organized an indefinite blockade. Just 16 days later, Construction and Drilling Specialists Inc. (CDSI), a company that was hired by Geotechniques and Minerals Inc. (GAMI), agreed to withdraw the equipment and pull out of the region. A CDSI spokesperson said they weren’t expecting any resistance from the Subanen, who consider the Mountain sacred.

Late Night Sunrise – The story of the resistance in Cabanas, El Salvador, to the El Dorado mine, owned by Canadian mining company Pacific Rim.