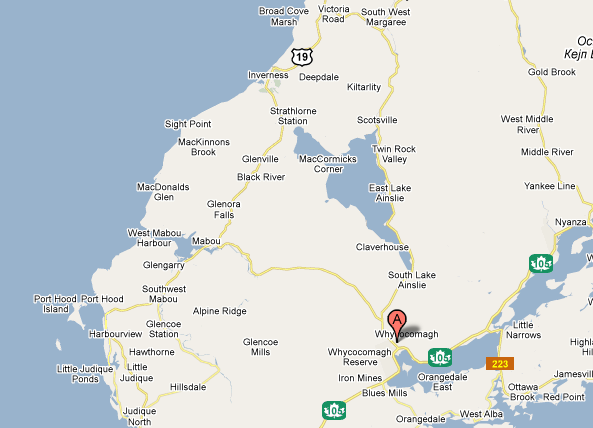 Members of the Waycobah Nation have expressed major concerns over a potential hydraulic fracturing or “fracking” project near Lake Ainslie, the largest freshwater lake in Cape Breton.

The Toronto-based company PetroWorth Resources says they are on target to start drilling for oil by mid November; but Troy Gould from the Keewesoo & Labrador Clan and Eva Nicholas from the Wabanaki Confederacy & Clans say PetroWorth still hasn’t carried out a consultation process or even informed the Mi’kmaq community of any potential risks.

“The lake Ainslie been used by Indigenous, First Nation people [since] Pre-Colonial [times] and it still is used by the majority of our First Nations, through out Cape Breton Island, known to us as Unama’ki,” says Gould and Nicholas in a recent open letter that they authored upon the direction of a Clan Mother.

“Eva and I were never consulted nor have the people of Waycobah First Nation, we had to get a last minute meeting, and we sent PetroWorth notices and we rejected their developments, especially their form of drilling!” states Gould by email. “After reviewing the minutes, they failed to Guarantee us SPILLS would not occur. Our hearts sank, knowingly, these toxins will cause another Boat Harbor and oil sand syndrome.”

Hydraulic fracking is a notoriously toxic process that involves the use of hundreds of different chemicals, tonnes of sand, and millions of litres of water which are “injected” at high pressure into underground rock formations to release the oil and gas within them. This in turn shatters the rock “much the same way that a stone cracks a windshield”, explains Ben Parfitt in his report FRACTURE LINES: Will Canada’s Water be Protected in the Rush to Develop Shale Gas?.

Aside from the emissions released into the air during the actual “fracking”, most of the chemicals stay below ground after they’re injected into the rock, along with any remaining oil and gas.

From there it can leach into nearby bodies of water. According to the independent investigative group Probublica, more than a 1,000 cases of well water contamination have been documented across the United States. Several cases have also been documented in Canada; for instance, landowners in Rosebud, Alberta, as seen in the documentary “Burning Water,” had their wells contaminated with toluene, benzene and naphthalene.

The biggest concern here for the Waycobah is whether or not PetroWorth’s fracking will contaminate Lake Ainslie. Most of lake’s water drains north into the Margaree watershed; but it also feeds Skye River which runs in the opposite direction, straight through the Reserve. The project site is roughly located 20 kilometres north of the reserve in the company’s massive 383,000 acre Lake Ainslie Block property.

“Their drilling will effect our river, lands and the animals and medicines we depend upon,” says Gould. “[And] it runs a severe risk of damaging a protected salmon run in Skye River here, that runs smack through our Reservation… [it] has the potential to ruin all Cape Breton Waters and Whycocomagh’s pristine image.”

Discussing legal matters, Gould points to the recent Marshal case, in which “the Supreme Court ruled that any industry or corporation doing business with water or any development that hinders our way of life, must consult with us… and PetroWorth hasn’t been forthcoming.”

“The Covenant Chain of Treaties protects the Indigenous Peoples’ rights to an economic use of the resources, including the fishery and other land-based resources such as forests. More broadly, the treaties preserve the Mi’kmaq way of life and their right to be meaningfully involved in resource decisions in ways that ensure that Mi’kmaq values and priorities are reflected. If it were to be fully implemented by Canadian and provincial governments, the Covenant Chain of Treaties would be a powerful tool for the protection of all waters (oceans and freshwater) within Mi’kmaq territory. “

This lack of consultation also appears to undermine a recent agreement between Canada, Nova Scotia and the Mi’kmaq. Singed on August 31, the “landmark” Agreement established “an independent, clear and efficient means for Canada and Nova Scotia to consult the Mi’kmaq of Nova Scotia on proposed activities or projects,” states a joint press release.

“The Agreement on consultation is part of the broader negotiations to resolve outstanding questions in relation to Aboriginal and treaty rights and self-government between Canada, Nova Scotia and the Mi’kmaq of Nova Scotia, called the Made-in-Nova Scotia Process. It addresses the direction provided by the Supreme Court of Canada regarding the legal duty to consult. In the 2004 Haida and Taku River decisions, the Supreme Court of Canada ruled that the federal and provincial Crown have a legal duty to consult, and, where appropriate, accommodate when Crown conduct may adversely impact established or potential Aboriginal and Treaty Rights.”

With the Lake Ainslie project just a mere arms stretch away from the reserve, it clearly has that potential. Not only can it adversely impact the Mi’kmaq Peoples Rights but it can severely undermine their physical health and well-being.

“Our Waycobah First Nation ground water can be contaminated our tap waters can become toxic! The Rivers and the Bay will too!” says Gould. “We L’nu must not and ought not allow this to happen!”

The Waycobah Band Council has not issued any formal statements about the project. It appears that they only just learned about it themselves. However, they have brought it to the attention of the KMK Chiefs (Kwilmu’kw Maw-klusuaqn – Mi’kmaq Rights Initiative) for a risk assessment.

While the Waycobah have been unaware of the project, it appears that the media has been equally unaware of the Waycobah. To date there hasn’t been a single mention of them in any available media reports or press briefings. At the moment, it’s as if they don’t even exist.