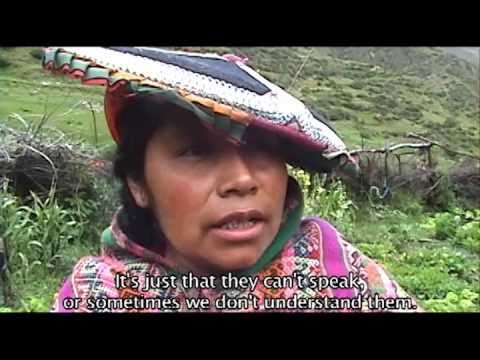 The Rights of Mother Earth

The nine-minute film was facilitated by Maja Tillmann as a part of Conversations with the Earth and it was screened at the World People’s Conference on Climate Change and the Rights of Mother Earth in Cochabamba, Bolivia, April 2010. The film was specifically created for a special side event at the conference that was attended by 35,000 people.

The Five communities that took part in making the film were: Perccapampa in the region of Huancavelica (Balvino Zavallos); Perka in Puno (Sabino Cutipa); Karhui and Queromarca in Cusco (Rosio Achahui); Chaka in Ayacucho (Pelayo Carrillo); and Cochas Grande in Junin (Irma Poma).

Launched in April 2009, “Conversations with the Earth is a collective opportunity to build a global movement for an indigenous-controlled community media network. CWE works with a growing network of indigenous groups and communities living in critical ecosystems around the world, from the Atlantic Rainforest to Central Asia, from the Philippines to the Andes, from the Arctic to Ethiopia. Through CWE, these indigenous communities are able to share their story of climate change. Through the creation of sustainable autonomous indigenous media hubs in these regions, CWE fosters a long-term relationship with these communities, based on principles of local control and supporting indigenous media capacity.”

Since the film was produced, CWE’s Peru hub has expanded its network of communities in Peru and even across the border in Bolivia. Seeing the film also inspired the participatory video team in the Philippines to start interviewing elders in their own communities to create a similar film about their visions on the rights of Mother Earth. Once it is available, this video will be posted at conversationsearth.org

With notes from Maja Tillmann and Rodrigo Otero.

To see more films and learn more about participatory video and the CWE Network, visit www.conversationsearth.org and www.insightshare.org