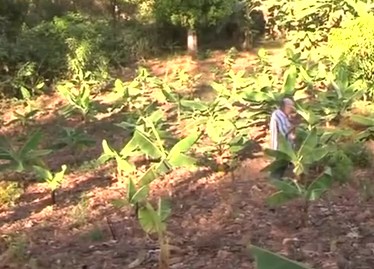 The story of the resistance in Cabanas, El Salvador, to the El Dorado mine, owned by Canadian mining company Pacific Rim. A film by Michael Watts & David McNulty.

Vancouver-based Pacific Rim has been trying to exploit gold deposits at its El Dorado mine for nearly ten years. But thanks to the vigilance of local communities and organizations like the Association of Friends of San Isidro, Cabañas (ASIC), the Association for Economic and Social Development (ADES) and Radio Victoria, the company has never been allowed to move the project ahead.

Just one the 29 mines currently proposed in El Salvador, the El Dorado would use about 50 tons of cyanide per day and the same amount of water in 12 months that would take local communities about 400 years to use.

This is obviously unacceptable to most people in the region, who fear that the cyanide and other toxic chemicals used in the extraction process could poison the local water supply. The “price” is simply too heavy a burden to carry.

However, saying “no” has come at an equally heavy price. Since June 2009, several community leaders, activists, journalists and communicators have been threatened, harassed, kidnapped, tortured and brutally murdered for opposing the gold mine.

Pacific Rim, which describes itself as “an environmentally and socially responsible exploration company” that focuses “exclusively on high grade, environmentally clean gold deposits”, is also trying to sue the government of El Salvador.

As noted in Late Night Sunrise, they bought a cheap company in the US in order to bring down a lawsuit using the U.S.-Central America Free Trade Agreement (CAFTA). The suit demands “‘hundreds of millions’ of dollars from the Salvadoran government, which rejected the Vancouver, B.C.-based company application for exploitation permits,” notes The Committee in Solidarity with the People of El Salvador (CISPES). “El Salvador’s Ministry of the Environment and Natural Resources argues that Pacific Rim never completed the necessary process to obtain an exploitation permit, and local communities have demonstrated widespread opposition to the proposed El Dorado gold mine based on the environmental and public health risks of cyanide-leach mining.” In August 2010, a World Bank tribunal agreed to hear the Canadian company’s suit.

To make matters even worse, Canada is negotiating its own free trade agreement with El Salvador, which could force the government to let Pacific Rim go ahead with the mine.

Nevertheless, that won’t stop anyone from saying “NO” and doing everything they can, without using violence, to protect their water and defend the region’s natural abundance.