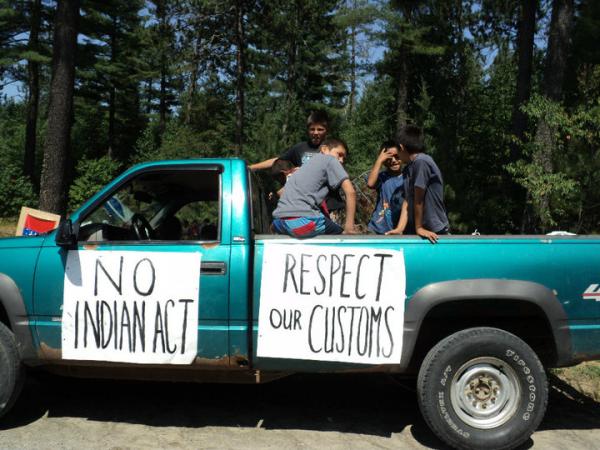 A group of unidentified attackers burned down a Papuan Customary Council office in West Papua just days before the new building was scheduled to be unveiled. It is believed the attack was coordinated by the Indonesian military and police forces.

AIDESEP, the largest indigenous organization in Peru, announced the formation of a new political party to contend in next year’s presidential elections. AIDESEP president Alberto Pizango, who was forced to flee the country after being charged with “conspiracy, sedition and rebellion” in 2009, will most likely run as the party’s candidate.

The Calgary-based company Enbridge received a final notice of trespass from Wet’suweten Hereditary Chiefs at a council meeting in Smithers, B.C. At the meeting, one Hereditary Chief explained that Enbridge, the company behind the infamous Northern Gateway Pipeline project, has not obtained permission to be on the Likht’amisyu clan’s territories and that “further trespass will be dealt with under Wet’suwet’en law.”

A Chilean Court authorized officials to force feed any or all Mapuche political prisoners currently on hunger strike across the country. In response to the decision, some of the imprisoned Mapuche have said they will oppose the measure, even if it means putting their own lives at risk. This is not the first time Chile has sought to force feed Mapuche political prisoners, using the same methods employed against detainees in Guantanamo Bay.

At least four people are dead and 30 more injured after police opened fire on a crowd outside Chinese government offices in Palyul county, occupied Tibet. The crowd was protesting the expansion of a gold mine that is severely degrading the fertility of their farmland. Previous complaints led to the petitioners being simply detained without any investigation. Click here to sign a petition in support of the Tibetan protesters.

After eight long years of protests and legal battles, India’s Ministry of Environment and Forests rejected Vedanta Resources’ controversial plan to mine Bauxite on the Dongria Kondh’s Sacred Mountain in Orissa, India. The announcement came just days after an investigative report revealed that Vedanta had been acting illegally and with “total contempt for the law”.

During the 9th World Indigenous Women and Wellness Conference in Darwin, Australia, participants called for an action plan that includes the creation of a human rights bill for all Australians. Currently Australia has no legislation to protect anyone’s human rights, be they white men or the most vulnerable population, Indigenous women.

Members of the Grassy Narrows First Nation returned to the site of their high profile logging blockade to stop the Ministry of Natural Resources (MNR) from interfering with road repairs on their traditional territory. The blockade renewal was, perhaps, inevitable. Aside from MNR’s juvenile bullying, the department has threatened to resume logging in Grassy Narrows “as early as September”. That is, despite the fact that they do not have the First Nation’s expressed consent.

Authorities in Honduras filed criminal charges against two senior officials from Entremares, a wholly-owned subsidiary of the Canadian mining company Goldcorp. The two executives were charged with violating Article 181 of the Honduran criminal code for their role in contaminating water sources near the company’s San Martin gold mine. If convicted, the officials could face up to six years in prison.

Indian and Northern Affairs Canada (INAC) went ahead with its sad plan to install a new Chief and Council in the Algonquin community of Barriere Lake. INAC selected the new leadership based on a mere “six to ten ballots” from a community of more than 450 people. Fortunately, the acclaimed Chief refused the position, stating that he does not want to “break ranks with the community’s broad opposition to the Indian Act band elections.” For more information, please visit barrierelakesolidarity.org

Mining-impacted communities and workers in Bolivia halted production at a silver and zinc mine to demand compensation for water usage and improved local services. “This is but the latest in a series of protests which appear to expose the government’s dire failure to come up with a coherent policy towards foreign investment and ownership; to forge an equitable working relationship between state mining company, Comibol and small scale miners; and, not least, respect the role of women in the extractive sector,” says MAC.

More than 1,000 Indigenous people were arrested as agitators for taking part in a National Transport Strike that stalled Nepal’s capital city . The month-long strike, totally ignored by the press, was organized by Nepal’s Indigenous People’s Federation to urge a timely drafting of Nepal’s constitution and to address concerns related to the inclusion of Indigenous Rights.

The President of Costa Rica authorized the violent removal of more than 20 indigenous leaders and others from the country’s National Legislative Assembly. The indigenous people had assembled to peacefully demand the passage of an autonomy law, something, notes Real World Radio, that the government has delayed “for decades.”

Women from the autonomous municipality of San Juan Copala in Oaxaca, Mexico, announced plans to carry out a Third Peace Caravan to demand the federal government dismantle paramilitary groups and help bring peace to the municipality. The announcement comes just two weeks after Oaxaca state troopers raided San Juan Copala to recover the body of a leader from UBISORT, the paramilitary group that has terrorized San Juan Copala for the past several months. Immediately following the raid, UBISORT seized control of the entire town… and the Oaxaca police did nothing.

Activists from Indonesia said they are planning to submit a draft bill on the rights of indigenous peoples to the House of Representatives by the end of August. If legislated, it would be the first bill in Indonesia to recognize and protect the rights of Indigenous Peoples.

A new constitution received overwhelming support in Kenya, bringing hope and a long-needed sense of recognition to Kenya’s Indigenous Peoples. The new document, bearing some resemblance to Bolivia’s groundbreaking constitution, represents “a clean break with the past and provides several avenues for the pursuit and strengthening of indigenous peoples individual and collective rights,” said the International Work Group for Indigenous Affairs (IWGIA).

Roughly 2000 Indigenous people set up river blockades in northern Peru to demand the fulfilment of several agreements, including the implementation of a medical facility and compensation for the regular use of the rivers and land by oil companies. The protest formally began on July 23.

Indigenous groups in Malaysia accused the government of using religion as a condition to receive development aid. They say that infrastructure is being offered to them but only if they agree to abandon their indigenous traditions and embrace Islam. The government claims it has done no such thing.

More than 200 fishing boats gathered in waters near Hsinchu County in northern Taiwan, to protest live-ammo training exercises performed by the Chinese military. The protesters, mobilized by the Hsinchu Area Fishermen’s Association, demanded roughly US$4 million in compensation because, they say, the exercises are severely affecting their livelihoods. the military holds its land-to-sea firing sessions an avg. 195 days a year.

Manufacturing the Intervention – Chris Graham, former editor of the National Indigenous Times, uncovers another layer of controversy surrounding the Northern Territory Intervention, dating back one whole year before the “Little Children are Sacred” report was published. His focus: an ABC Lateline program that aired on 21 June 2006… a program that was almost completely fraudulent.

Colombia: Indigenous Peoples Under Threat – In Colombia, over two decades of conflict between the government and paramilitary groups has uprooted more than 3 million people. Today the conflict poses an even greater threat of extinction to 34 distinct Indigenous Peoples in Colombia. Among them, in the Uraba region of northwest Colombia, the Tule.