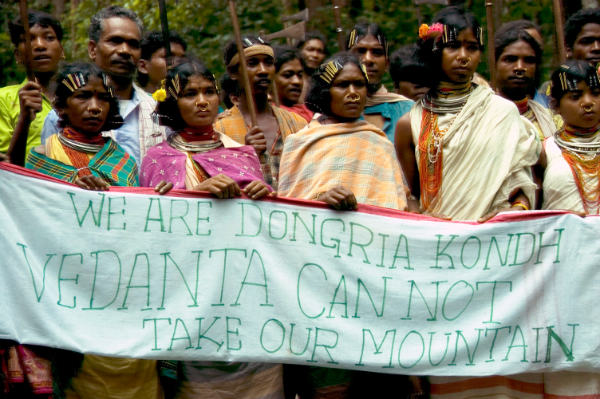 After eight long years of protests and legal battles, India’s Ministry of Environment and Forests has rejected Vedanta Resources’ controversial plan to mine for Bauxite on the Dongria Kondh’s Sacred Mountain in Orissa, India.

Environment minister Jairam Ramesh announced on August 24 that the proposal was being dropped was because the UK-based company and their partner, the state-owned Orissa Mining Corporation, has extensively violated state and federal laws including the Forest Conservation Act (FCA), the Forest Rights Act (FRA), the Environment Protection Act (EPA) and the Orissa Forest Act.

“This is not an emotional decision. There is no prejudice and no politics. This is not because Niyamgiri is sacred. This is purely a legal approach,” said Ramesh.

But even so, it is the rarest form of victory for a Minister to say ‘no’ a mining project, especially since the Indian Supreme Court and the government already said yes in 2008 and 2009, respectively.

Perhaps these earlier decisions were simply uninformed impulses, where the Minster had access to an investigative report that detailed Vedanta’s extralegal activities and the possible negative impacts the project could have on biodiversity and the region’s Indigenous population.

On August 16, a four-member committee set up by the Environment Minister released the Saxena report, which revealed that Vedanta had been acting illegally and with “total contempt for the law”. It also showed that local officials “colluded” in the company’s illegal activity; and that the mining area is, “beyond any doubt… the cultural, religious and economic habitat of the Dongria Kondh.”

The report also found that “the legitimate claims of the Dongria Kondh have been discouraged and denied without the due process of law, which is illegal on part of the district or sub-divisional committees. The report further said that the Orissa government is not likely to implement FRA in a fair and impartial manner since it has gone to the extent of forwarding false certificates,” says Padmaparna Ghosh in an article for the Mint.

Illegal activities aside, the Dongria Kondh have welcomed the cancellation, stating to Amnesty International that, “After years of struggle and visits by committees our voice has finally reached Delhi.”

“The Niyamgiri mining denial is the result of a sustained and hard-fought struggle by the Dongria Kondhs, the Kutia Kondhs, and the Niyamgiri Suraksha Samiti, supported by many other people and groups in India and abroad. This is indeed a victory for the people’s movements on the ground and will inspire other struggles throughout the country,” says the National Forum of Forest People and Forest Workers (NFFPFW).

“Nonetheless, it is premature to assume that the machinations of Vedanta Group will stop with the denial of mining in Niyamgiri. Vedanta’s illegal alumina refinery at Lanjigarh is still operative and, given the scores of violations it has evidently committed over the years, a decision to shut it down immediately must be taken and punitive measures be considered against the company and their cronies in the state government,” continues the NFFPFW.

“There is a need to be vigilant against further possible transgressions by the company. Moreover, it would rather be brazen mockery of the recent government decision itself and a travesty of justice and democratic norms, if Vedanta is given some alternative sites to extract bauxite to feed the refinery, as the company has already started mobilizing on the corridors of power for the same.

“It is also important to keep in mind that one denial and one piece of justice will not undo years of governmental kowtowing to corporate greed and innumerable narratives of injustice and illegalities unfolding everywhere in India. From Arunachal Pradesh to Jammu and Kashmir to Himachal Pradesh, and from Orissa to Maharashtra and Goa, forest communities, farmers, and fish-workers are still locked in grim battles against the corporate—State nexus in order to defend their social, economic, cultural, and ecological existence—in essence, their identity.

“All these people demand justice—which means saying an emphatic ‘no’ to all forms of resource-[grabbing] by large or small corporations in nexus with politicians and sundry contractors. In the name of ‘development’, no more forests and lands must be taken away from people—meaning, no more violation of their legal and constitutional rights at will.”

“It is time that the government of this country starts respecting the country’s Constitution and its own laws. We hope that the decision on Niyamgiri marks the beginning for a democratic process where the government brings all its Constitutional obligations to the fore whenever it takes a decision hereafter.”