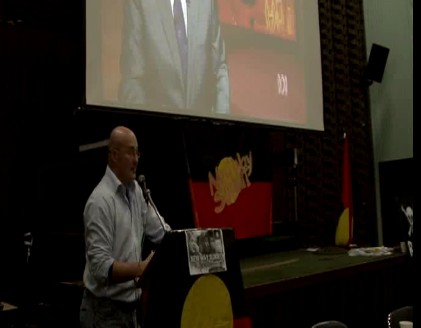 Chris Graham, former editor of the National Indigenous Times, uncovers another layer of controversy surrounding the Northern Territory Intervention, dating back one whole year before the “Little Children are Sacred” report was published. His focus: an ABC Lateline program that aired on 21 June 2006… a program that was almost completely fraudulent. Please Be Advised: this video contains non-graphic depictions that are sensitive to some viewers, including the physical and sexual abuse of children.

The Northern Territory Intervention is quite possibly the most controversial government-led campaign against an indigenous population so far in the 21st century. Certainly, there have been hundreds of other campaigns around the world, each of them tragic in their own right. But few of them can compare to the utter rashness of the Intervention; nor the fear, revulsion and shame that it brought on having been justified in the name of “saving the children.”

Since the first day the intervention began in 2007, it has been seen as overtly racist. Indeed, the government suspended the Racial Discrimination Act to move the legislative plan ahead.

They had no choice but to suspend to act, since they were:

The whole plan was outlined in a 500-page Bill that pretty much came out of nowhere, as if it was just sitting on some shelf gathering dust. The Bill was brought into law in August 2007, two months after the intervention was formally underway.

The controversy surrounding the intervention is quite extensive. Aside from its obviously racist nature, and its intentional erasure of indigenous rights, there’s the fact that the police and military found few or no signs of child abuse, even though such abuse was widely reported in the press as “rampant”. What the police did find, according to Major General David Chalmers in 2007, is that some of the kids in some of the communities had “dental issues, and infections of the skin, ear, nose and throat…”

The intervention was heavily based on the “Little Children are Sacred” report, which similarly indicated that the sexual and physical abuse of children and drug and alcohol abuse was rampant in the targeted communities. The report also outlined a set of 97 recommendations on how the situation can be improved. The government, reportedly “Inspired” by the report, ignored every single recommendation, choosing instead to enact their own agenda.

In this talk, filmed at the New Way Summit in Melbourne, Australia, on July 2, 2010, Chris Graham uncovers a whole new layer of controversy surrounding an ABC Lateline program that aired on June 21, 2006. The program, says Graham, is directly responsible for the “Little Children are Sacred” report. It could, then, be considered the foundation of the government’s intervention.

As Graham quickly reveals, the Lateline report was almost completely manufactured. It was in large part, the result of false statements that were given by a supposedly “anonymous former youth worker”. The “anonymous former youth worker”, Graham observes, urned out to be Gregory Andrews, a high-ranking government official that advised the Minister for Indigenous Affairs, Mal Brough, on Australia’s Aboriginal policy.

Masquerading as the anonymous former youth worker, Andrews told ABC that he “lived in Mutijulu and the central deserts between 2000 and early 2006” and that “The people who are in control [of the community] are the drug dealers and the petrol warlords and the paedophiles.”

In reality, Graham explains, Andrews never spent one single night in Mutijulu. And, at the time of the report, there were absolutely no known paedophiles in the community. There was one, several months before ABC Lateline caught wind of the story, says Graham, but he was driven out of the community by the community.

The fraudulent nature of the Lateline program goes on and on.

As of August 2010, the intervention has been active for 30 months. Sadly, there are no signs that it’s going to end any time soon, despite the endless cry for a “rollback” and demands for consultation–not to mention Prime Minister Rudd’s apology, the United Nations condemnation of the intervention, and the country’s endorsement of the UN Declaration on the Rights of Indigenous Peoples.

However, a small shimmer of light recently appeared on the horizon. As reported this week by the Epoch Times Indigenous Affairs Minister Jenny Macklin said the Federal Government is committed to changing the constitution to recognize the nation’s Indigenous Peoples.

This recognition will ultimately necessitate the end of the intervention; that is, unless the government plans to “intervene” in the lives of every Australian citizen.

It also remains to be seen if they will try to exploit the opportunity to enfranchise the indigenous population as Australian citizens without any actual indigenous rights. Given the policies and practices surrounding the intervention, it’s certainly possible.

However, it is hoped that the government will take the better path, by finally stepping way from its legacy of racist paternalism toward a relationship of equality and respect.

You may also want to watch: Our Generation; Listen and Accept Our Voice; Nothing’s changed for Australia’s Indigenous People.

Thank you to Eleanor Gilbert for making this video available