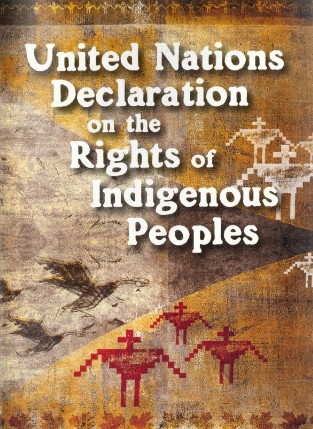 Tell the US to Endorse the UN Declaration on Indigenous Rights

On April 20, 2010, during the Ninth Session of the UN Permanent Forum on Indigenous Issues, US representative to the UN, Ambassador Susan E. Rice announced that the US government would formally review its position on the UN Declaration on the Rights of Indigenous Peoples.

25 years in the making, the Declaration was finally adopted by the UN General Assembly on Sept. 13, 2007–with 144 countries voting in favour, 11 abstaining, and four countries notoriously voting against.

Over the past 3 years, two of the abstaining countries and two of the opposed, New Zealand and Australia, have announced their support for the Declaration; while Canada has expressed its own interest, at least, in taking steps to endorse it.

This leaves only the United States, who has opposed the Declaration in the past because the United States has been concerned over provisions on land rights, collective rights, and free prior informed consent amongst other issues

Today we are hopeful that the Administration is taking a “fresh look” at the Declaration. Chief Karl Hill of the Cayuga Nation reflects on this change in his recent interview with the Indian Law Resource Center (ILRC).

Chief Hill spoke on July 7, 2010, the same day the U.S. State Department began its consultation with Indigenous Leaders and representatives on its review of the Declaration.

During the consultation, the State Department urged Indigenous Peoples in the United States to send in their comments as soon as they can–and, if possible, to include responses to the following questions:

The ILRC has prepared a Draft Letter for Indigenous Nations answering the two questions, which can be obtained on their website. An additional Draft Letter has been prepared for Non-Governmental Organizations.

The US Government will be accepting statements until October 2010.

To help ensure a positive outcome of the review, the ILRC is also asking individuals to send in their own comments in support of the Declaration.

In a recent email, the ILRC States, “This Declaration is important because it acknowledges that indigenous peoples deserve respect, fair treatment by the government, equality before the law, and the right to make decisions about their lands, territories, and peoples. The United States’ endorsement of the Declaration will also strengthen its engagement in on-going international discussions on issues that are fundamental for the survival of indigenous peoples, and all people around the world, such as biodiversity and climate change.

“Please send a letter to President Obama and ask him to endorse the United Nations Declaration on the Rights of Indigenous Peoples so that this Declaration can be part of the Unites States’ commitment to bring real and lasting change for indigenous peoples in the United States and around the world.”

Read the UN Declaration on the Rights of Indigenous Peoples (PDF)

To learn about the history and importance of the Declaration, see: