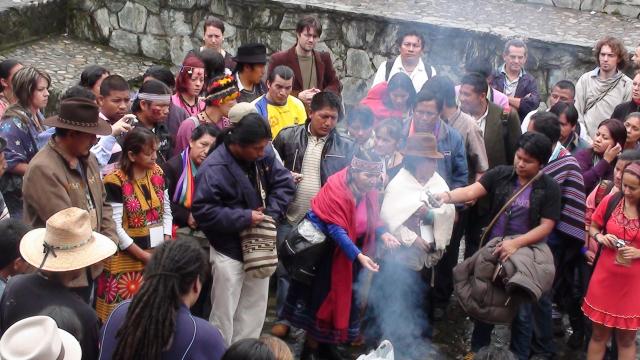 This past week, more than 200 Indigenous organizations and 79 different nationalities came together in La Maria Piendamó, Cauca, Colombia for the First Continental Summit of Indigenous Communication in Abya Yala (the Americas).

Delegates at the four-day Summit, which was hosted by the Regional Indigenous Council of Cauca (CRIC) and the National Indigenous Organization of Colombia (ONIC) discussed a pretty wide range of issues, including: the Rights of Mother Earth and collective rights to communication; Discrimination and the distortions of institutionalized media; Aggression towards Indigenous media producers; and the Right to Communication and Information at the international level.

However, the cornerstone of the Summit was surely the Continental Indigenous Communications Network.

Such a network has been discussed at a number of other conferences, most recently at the Fourth Continental Summit of Indigenous Peoples of Abya Yala, held last year in the department of Puno, Peru. That particular discussion helped form the basis for this month’s Summit in Colombia.

After much analysis, the delegates ultimately came to an agreement. As stated in their Declaration, they are now committed to building “a continental platform in order to give direction and articulate our efforts at the level of Abya Yala, so that indigenous communication is always at the service of our Indigenous Peoples and Nationalities in reflection of our legitimate aspirations.”

“As a first step”, the Declaration continues, “we have decided to establish a continental indigenous communications network Abya Yala that articulates the diverse networks, processes and experiences of our Indigenous Peoples and Nations.”

Perhaps it goes without saying, but there’s a need for a communications network on every continent, since the lines of communication are so limited for us. Whether we’re talking about Peru, Colombia, Tibet, West Papua or Africa, it’s the same thing every time. On top of that, our perspectives, concerns and opinions, like our rights, are constantly ignored by the media. That is, in between the times were given 10 words of space, while some company executive gets four paragraphs. And there’s cases of extreme censorship like In Tibet where Indigenous Peoples aren’t allowed to report on anything unless it’s “good news.”

Oddly enough, these same limitations exist in Canada and the United States. Even though we have hundreds of radio stations, newspapers, websites, and even television networks–like the Aboriginal Peoples Television Network (APTN)–the flow of information is heavily restricted at the local, national, and international levels. As members of the Canadian-based Media Co-op recently pointed out, this is especially true in Northern Canada, where indigenous communities are more isolated.

As well, the same irrational right-wing rhetoric we’ve seen in Peru, Ecuador and Colombia–how Indigenous Peoples are “lunatics” and “terrorists” and how we’re being “controlled by external forces”–is also quite common in Botswana, Papua New Guinea, India, Burma, Australia, and China. It’s starting to gain a foothold in Canada, too; far more than we’re willing to admit.

An Indigenous Communications Network, like the one proposed in Colombia, enables us to counter this insane rhetoric on our own terms, in a manner that we can control. And, in the long-run it gives us immediate access to each other, which is essential for organizing and standing in solidarity with our Brothers and Sisters on this continent or any other. After all, it doesn’t do us any good to find out about a protest two weeks after it’s over.

That said, it’s going to take a few years to build up the Abya Yala Network. There’s a lot of work to do; for instance, they will have to build a lot of support for the initiative, petition governments for funding and resources, create new alliances with NGOS and universities, and push forward the right to communication at the UN.

According to the declaration, they’re also going to build a virtual platform and a “mobile school” to train people in communications as well as a “continental archive” to house indigenous media. And, among other things, they’re going to push for 2012 to be “the International Year of Indigenous Communication.”

As much time as it will take to move such a monumental network forward, it will be time used well, because, in the end, it will enable us and empower us to move that much closer to what we want more than anything: to protect our territories, to preserve who we are, and to live beyond mere survival.