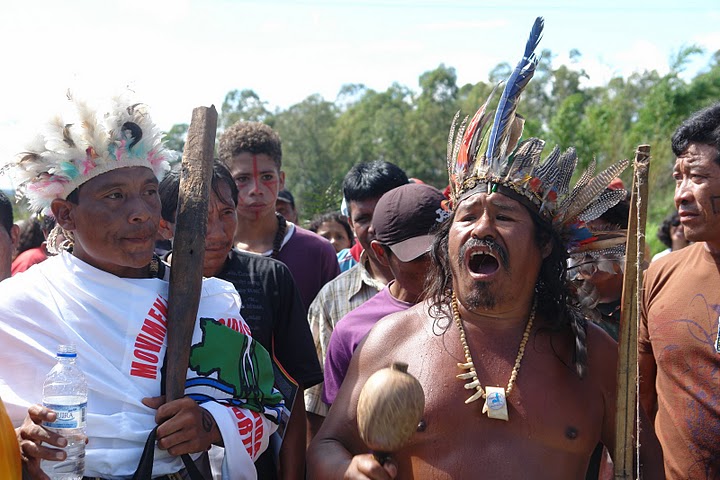 Apr 30 – Universal Declaration of the Rights of Mother Earth, and texts from the People’s Conference on Climate Change – Here you will find all key documents from the World People’s Conference on Climate Change and the Rights of Mother Earth, which gathered more than 35 thousand people from 140 countries in Cochabamba, Bolivia. To learn more about the conference, see here.

Apr 29 – Controversial Wind Farm on Sacred Land Approved – The Nantucket Sound Cape Wind Project was approved this week by US Secretary of the Interior Ken Salazar. The controversial wind farm will completely undermine an important Wampanoag ceremony and destroy a number of burial sites in the region. This is despite the area being determined eligible for inclusion on the National Register of Historic Places.

Apr 28 – Two dead and three missing after paramilitaries attack peaceful caravan – Two people are dead and three are still missing after a peaceful solidarity caravan was attacked by paramilitaries in Oaxaca, Mexico. The caravan “came under fire” on Tuesday (April 27) “as it passed through La Sabana, a town controlled by UBISORT, a paramilitary organization that is allied with the ruling Institutional Revolution Party (PRI).”

Apr 28 – United States apologizes to American Indians – but forgets to tell them?! – Robert J. Miller comments on the Native American Apology Resolution, which Barack Obama signed in December as part of a defense appropriations spending bill… Signed, WITHOUT telling any Indigenous People.

Apr 24 – Indigenous in Argentina “Drowning in Sadness” – The legal battle waged by an indigenous community in northern Argentina against the government over a project that flooded half of their territory highlights the fact that legal title to their land is not enough to overcome the marginalisation they have faced for centuries.

April 22 – Indigenous People issue warning of bloodshed over Amazon dam – Indigenous leaders have issued a warning that “bloodshed” is imminent now that Brazil has granted rights to build the controversial Belo Monte hydroelectric dam in the Amazon. The Auction was rushed through on Tuesday, April 22, following a set of court injunctions that blocked and then unblocked the auction process.

April 14 – Guatemala’s government is not complying with ILO resolution – In Guatemala, the National Maya Waqib Kej Coordination is demanding Alvaro Colom’s administration comply with the ILO resolution demanding over thirty days ago the cease of mining activities. See (here for some background).

April 14 – West Papua: Land grab to displace locals – Plans for a US$6 billion food estate in the Merauke region of West Papua has been attacked by farmer and environmental organisations as a land grab that would destroy 2 million hectares of virgin forest. The project would also employ some 6.4 million people — three times the current population of Papua.

Apr 10 – NB Indigenous Groups Launch a “generous” $13 billion lawsuit against Canada – A coalition of three New Brunswick native groups has launched a massive, $13 billion lawsuit against the federal government in a bid to “redress the imbalance” indigenous people face in the province – including a history of “genocide.” The civil suit seeks the financial settlement dating back to 1610, as well as a recognition of the Mi’kmaq and Métis people’s rights and relief over land claims.

Apr 9 – Ecuador: 5000 Indigenous People Protest Against Water Bill – Indigenous people from several communities in Ecuador marched in Quito in protest against a proposed law to regulate water, which they say is a step toward the privatization of water resources.

Apr 7 – Borneo: Kayan People win 12-year battle against oil palm – More than twelve years after going to court, the Kayan native community of Long Teran Kanan on the Tinjar river in the Malaysian part of Borneo have won an important legal battle against the Sarawak state government and IOI Pelita, a subsidiary of the controversial Malaysian oil palm producer IOI.

Apr 6 – Mercury Poisoning in Grassy Narrows worse than ever – The health impacts of mercury poisoning in Grassy Narrows people are worse now than in the 1970’s, says a newly translated health study by the world renowned Japanese mercury expert Dr. Harada Masazumi. The translated study was released today, April 6, 2010, exactly 40 years after the Ontario government banned fishing on the Wabigoon River due to high level mercury contamination by the Dryden paper mill.

Apr 6 – Penan step up campaign to defend Heart of Borneo nature reserve – Penan natives from Sarawak’s Upper Baram region in the Malaysian part of Borneo have erected two logging road blockades to prevent their last remaining virgin jungle from being logged by the Samling Group, a Malaysian timber giant. The blockades have been erected at two strategical locations on logging roads near two Penan villages.

Apr 5 – New report shows Peru Government’s betrayal of Indigenous Peoples – A new report by ODECOFROC, a group that represents 56 Awajun and Wampis communities in the Amazon, reveals a number of government betrayals concerning the Indigenous Peoples’ territory. These betrayals ultimately led to the massive protests last year, which culminated in Bagua on June 5.

Apr 5 – Hundreds rally to stop nuclear dump in Northern Territory, Australia – Indigenous groups and environmentalists are continuing a push to stop a radioactive waste dump being built on Muckaty Station in the Northern Territory. the government is “fraudulently” moving ahead with the project.

Apr 2 – India: Police and private militias attack indigenous people resisting land acquisition – According to eyewitnesses, at least 30 indigenous protestors sustained serious injuries in an ongoing action by about 1,000 police officials and 250 well-armed private civil militiamen supporting a land acquisition. The Indigenous People are protesting against the government acquisition of their lands and habitats for theTata Steel plant and supporting infrastructure.

Apr 1 – Canadian Drilling Threatens Ecuador Reserve – The Canadian oil company Ivanhoe Energy obtained a concession from the Ecuadorian government for an oil exploitation project inside the UNESCO Sumaco Biosphere Reserve, in the Ecuadorian province of Napo. It is projected that the project will extract between 4.5 and 7 million barrels of petroleum from 30 or more wells. The project has not been sufficiently studied and we worry that it will have major social and environmental impacts. the Kichwa People intend to mobilize to stop the drilling operation.

We want to shut down this mine – On Friday, March 26, 2010, two hundred Indigenous Landowners and concerned citizens stood up in protest against the Chinese-owned Ramu nickel mine in Madang Province, Papua New Guinea. The peaceful protest was deemed illegal by police and halted.