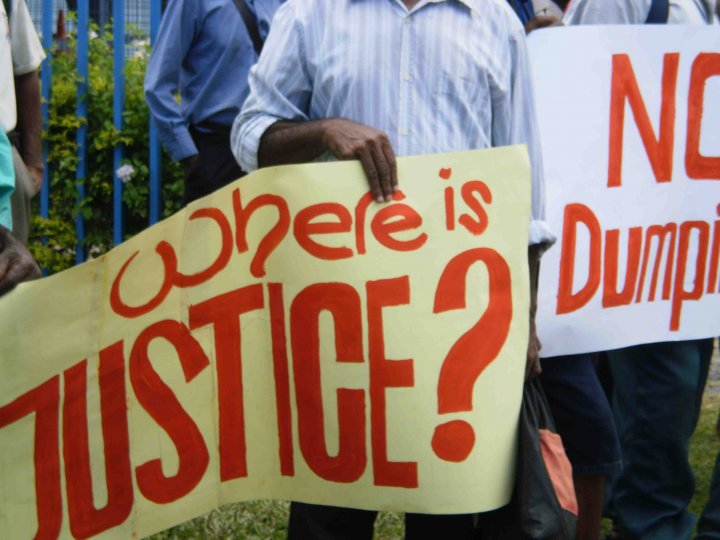 We want to shut down this mine

On Friday, March 26, 2010, two hundred Indigenous Landowners and concerned citizens stood up in protest against the Chinese-owned Ramu nickel mine in Madang Province, Papua New Guinea. The peaceful protest was deemed illegal by police and halted.

The event took place in front of a packed courthouse, where the Chinese Metallurigcal Construction Company (MCC) was attempting to lift a temporary injunction that stopped the company from finishing their submarine tailings pipeline. The Landowners were granted the injunction seven days earlier.

While the protesters remained outside of the courthouse–inside, the Judge was ruling against the MCC, ordering them to return to court in Madang on April 12. The judgment is being hailed “another major victory” for Indigenous Peoples, who are gravely concerned about MCC’s plans.

The tailings pipeline, 134-km long, would carry tailings waste from the nickel mine to the Bismarck Sea, where, over the course of ten years, more than 100 million tons of waste will be poured.. The toxic waste will invariably poison fish stocks and cause”extreme ecological destruction” to the seabed.

“With work on the overland pipeline completed, the Chinese are now planning a series of underwater explosions to blast a way through coral reefs for the undersea section of the pipe,” notes an Action Alert by Rainforest Portal.

On top of the ecological threat, Indigenous Peoples at the mine site have been devastated by forced removal from their traditional lands.

Some have not only have they lost their homes. According to Scott Waide, who recently interviewed members of one village, about 50 members of the Mauri Clan have been also forced to live at a temporary resettlement area — “a forbidden, sacred site” where the Clan’s ancestral spirits dwell. “Sacred as it was to the Mauri Clan of Kurumbukari, the site has been designated as a stockpile area for nickel ore,” says Waide.

Fortunately, with the temporary injunction still in effect, all MCC activity has been halted. But even so, the struggle to shut down the Ramu mine is far from over. After all, the government of Papua New Guinea, which partly owns the mine, has made it clear that it is behind the company and their blind effort to exploit the land.

Learn more at Ramu Nickel Mine Watch and the Facebook group, “WE SAY NO to DEEP SEA Waste Disposal in Basamuk BAY”