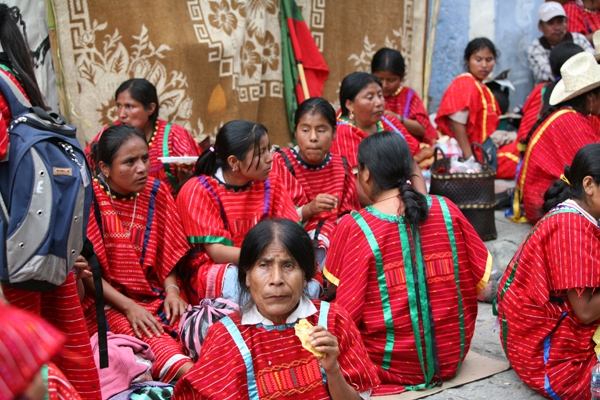 Two people are dead and three are still missing after a peaceful solidarity caravan was attacked by paramilitaries in Oaxaca, Mexico.

The caravan “came under fire” on Tuesday (April 27) “as it passed through La Sabana, a town controlled by UBISORT, a paramilitary organization that is allied with the ruling Institutional Revolution Party (PRI),” reports the freelance journalist Kristin Bricker.

“One young woman managed to make it to a hospital where she is being treated.” In her initial report, the young woman, Monica Citlali Saniago Ortiz, said at least 15 people were wounded.

The caravan was accompanied by about 40 human rights defenders, international observers and two journalists.

The number of injured are still unclear, however, it has been confirmed that CACTUS member Beatriz Alberta Carino Trujillo and an international observer from Finland, Jyri Antero Jaakkola, were shot dead in the attack. The young woman, Monica Citlali Saniago Ortiz, was shot in the back. Three people are also missing, and it is feared that they have been captured by the paramilitaries.

At the time of the attack, the caravan was en route to the autonomous Triqui municipality of San Juan Copala with a fresh supply of food, water, clothing and other basic necessities.

The town has been closed off by a paramilitary blockade for the past 6 months, making it virtually impossible to leave or bring in supplies.

Kristin Bricker explains, “San Juan Copala declared itself autonomous following the 2006 uprising in Oaxaca, and the autonomous government declared itself adherent to the Zapatistas’ Other Campaign. The autonomous municipality has been the target of paramilitary violence ever since. Countless San Juan Copala residents have fallen victim to paramilitary violence. The most prominent case was the execution of two young Triqui radio journalists. This past November, paramilitaries opened fire on San Juan Copala’s town hall during a caravan that was traveling to San Juan Copala from San Salvador Atenco. UBISORT had put up a highway blockade to stop the caravan, which was comprised of People’s Front in Defense of the Land (FPDT) members. While the FPDT was trapped outside the town, paramilitaries attacked the town hall. They shot four children, killing one of them.” The paramilitary group ultimately took control of the Municipality’s offices.

They remained there until just 7 weeks ago, when the “Independent Movement for Triqui Unification” (MULT-I) peacefully forced them out. It was, however, a sombre victory since the paramilitary blockade has continued to tie down the Municipality.

Since the initial attack in November, at least 17 indigenous Triquis have been murdered.

Concerning the recent attack, Oaxacan Voices Constructing Autonomy and Freedom (VOCAL) have released a statement demanding “the government of the killer Ulises Ruiz put an end to all paramilitary attacks in the Triqui Region, and to the financing, provision of arms, and impunity enjoyed by these paramilitary groups in our state.” They are also demanding “the immediate presentation of our disappeared comrades.”

They are also calling on “the people of Oaxaca, Mexico, and the international community and different social organizations, collectives and groups to make a visible show of solidarity and support, demanding the live presentation of our disappeared brothers and punishment of the responsible people. We also ask that you demand an end to the conditions of violence imposed on the Autonomous Municipality of San Juan Copala.