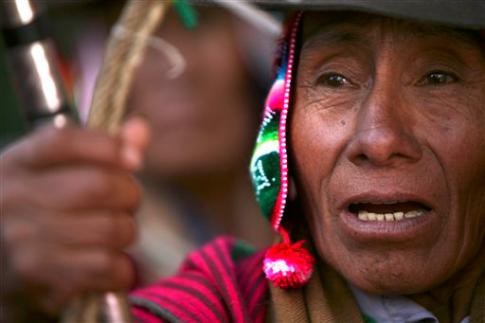 With the Global People’s Conference on Climate Change and the Rights of the Mother Earth set to begin in Cochabamba, Bolivia, a group of Indigenous people have occupied the offices of a mining firm in the southeastern province of Potosi near the Chilean border.

The occupation began several days ago, on April 12, with roughly 700 Qulla People blocking access to a key railway line that leads away from the San Cristobal silver-zinc-lead mine, owned by Japan’s Sumitomo Corporation.

The Qulla say that Sumitomo is dumping mine waste directly into the Madera River, contaminating the land and threatening their water supplies; and constructing roads that are trampling on the rights of Mother Earth. They are demanding compensation for the environmental damage and calling on the Potosi government to honour their agreements, which includes providing help with some local infrastructure.

“Our demands are fair and must be met. The mine is ransacking our natural resources. We want compensation for the damage and … we want help with our development,” says protest leader Mario Mamani. Since the protest began, some 80 containers loaded with ore have also been seized and they have occupied the company’s offices. According to latest reports, the Qulla set fire to the offices and they have started to overturn the containers.

At the same time, the Qulla are also expressing frustration over President Evo Morales’ refusal to let them set up “Table 18” at the Climate Conference.

According to the Achacachi Post, which is sponsored by the US government, the National Council of Ayllus and Markas of Qullasuyu (CONAMAQ) wants the table to discuss environmental problems in Bolivia, including Sumitomo’s pollution of the Madera River and the concern about Lake Intikjarka (Titikaka) being filled up with “sewage from the cities of El Alto, Batallas, Huarina, Tiquina, Achacachi, Mina Matilde in Bolivia and Puno and Huancane in Peru.” The lake is an important fishing resource for the Qullas and Uru-chullunis.

The Bolivian Deputy Minister of Environment, Juan Pablo Ramos, told the Associated Press that it’s not their intention to circumvent the discussion, but the world conference is not the appropriate settin,g because it will be focused on global issues.

CONAMAQ, however, says they are still going to proceed with Table 18, because “the Earth is our mother [and she has her rights], “for example, not to be contaminated.”

The Rights of Mother Earth will be one of the central focuses of the Conference. Other tables will include discussions on Agriculture and food sovereignty, the Kyoto Protocol, Dangers of the Carbon Market, and establishing an Environmental Court.

Overall, the World People’s Conference on Climate Change is a vital follow-up to the failed UN Conference in Copenhagen. And while the Qulla have been unfortunately sidelined, perhaps we can take stock in the fact that they won’t be labelled as criminals and thrown in jail.

We should, nevertheless, pay close attention to the Qulla. If nothing else, they are reminding us that we cannot ignore the rivers for the ocean. Instead, we must lead by example for every tree, river, plant and animal, ecosystem, every person, community and Nation.

We certainly can’t leave it to companies like Sumitomo and United States government or the United Nations. It’s up to each and every one of us.