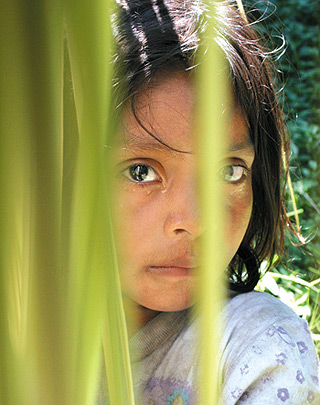 Indigenous communities in the Sierra de Perija region of Venezuela are facing an increasing number of threats by Colombian FARC and ELN guerrillas, as well as the Venezuelan military.

According to reports obtained by Survival International, Members of FARC have been settling along the border areas of the Bari and Yukpa indigenous communities, bringing in weapons and drugs, and enticing young people to join them and squat on indigenous lands.

The threat of violence is a constant, as the guerrillas demand supplies like food, clothing and medicines.

“They don’t pay for anything, it’s always for ‘solidarity’. But you can’t say no to them. Nor can you complain about them to others, because someone might inform on you,” explains one indigenous leader, who ask to remain anonymous.

“The Venezuelan military are also targeting indigenous peoples. On 19 January, forty soldiers raided the Yukpa community of Yukpa Chaktapa, in the mountainous area of Sierra de Perija. They pointed their guns at leader Sabinos Ramero Izarra and his family and accused them of being involved with Colombian guerrilla groups,” says Survival.

This was not the first time Chief Sabino and his family had been threatened. In August 2008 a group of armed aggressors attacked Sabino’s daughter, demanding that Sabino show himself. One month earlier, there was an assassination attempt against Sabino, which resulted in the unfortunate death of his father.

Leading up to these attacks, the Yukpa occupied a series of privately-owned estates, an effort to reclaim their traditional lands after being forcefully evicted in the 1940s.

The situation for the Bari and for the Wayuu has not been any better.

It is one where “the state has acted as accomplice,” notes a member of El Libertario. “Their position is no accident in an area where you can find Colombian FARC and ELN guerrillas, those displaced from Colombia who also impinge on the rights of the natives to their lands and to boot, mining transnational companies from Ireland, Brazil, Spain and Chile who have the government blessing to extract coal in the most unhealthful and environmentally harmful way.”

“It is necessary to make this problem known to national and international public opinion to put a stop to the escalation by the landowners who, in their position of strength and with the complicity of the state seek to overwhelm the weaker sector.”

Send a letter to President Chavez

Venezuelan President Hugo Chavez has on numerous occasions proved himself to be willing to act in the best interests of the people over industry – most recently, when he restored the free home heating oil program to impoverished communities in the US, and in 2008, following the attacks against the Yukpa.

As belated (and as inadequate) as the action may have been, at least he did something. It’s more than we can say for any other head of state.

That said, Chavez wouldn’t have done anything if not for the many people around the world who came forward to demanded it.

For the Wayuu, Bari, and Yukpa, your voice is needed once again: