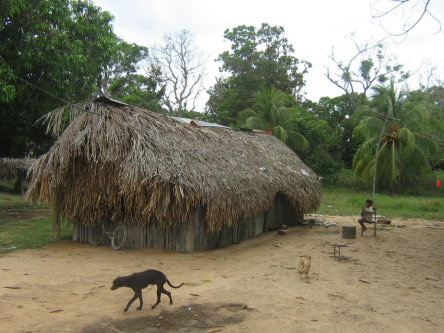 Despite the demarcation of indigenous territories in Venezuela, and the Decree issued last year (see comment) by President Hugo Chavez that prohibited new coal mines from being built in the Sierra de Perija — and even though no more bombs are being tossed into their communities — the indigenous People of Venezuela, especially the Bari, continue to find themselves surrounded by the prospect of their own demise.

Unless the government designs (and implements) specific plans for each of Venezuela’s 32 distinct Peoples—plans that account for their land and resource needs above all — than by the time Chavez’ term ends in 2013 they may cease to exist as a People.

Humberto Márquez relays this in a recent article on IPS News, Barí People Left Without Land by Oil, Cattle, Coal.

The walls of their homes are made from tree trunks, the floors are packed dirt or a few wooden planks, the roofs thatched palm leaves. Everything is bleached a pale dry grey by the blazing sun. Children run and play among a handful of chickens as the adults seek a shady spot to sit and talk about their plight.

“Our grandparents fought to defend our land, but they lost their fight to the oil companies, who sent in men with rifles. Our people took refuge in the mountains, and then the cattle farmers came in and grabbed this,” said Ignacio Akambio, another member of the community.

“We can’t hunt anymore, because all the animals have disappeared, and we have nowhere to grow crops,” he continued. “And so we eat corn flour bread or spaghetti, and we don’t live to be old-timers like before; instead we are sick all the time and only live to about 60.” It is a harsh fate for the people that Sabaseba, the creator, plucked from the inside of pineapples, according to legend.

Anthropologist Lusbi Portillo, from the non-governmental organisation Homo et Natura, told IPS that “the crux of the Barí people’s problem is that between 1910 and 1960, they lost their land and were decimated by the advance of oil exploration, first, and then by the cattle farmers who occupied and cut down their forests in the flatlands and pushed them towards the unproductive land in the mountains.”

The ancestral territory of the Barí people — now reduced to less than 3,000 members spread across roughly 20 communities in Venezuela — encompasses between 4,000 and 5,000 square kilometres, located 650 kilometres west and southwest of Caracas. When viewed on a map, it resembles a wedge cutting into Colombia, where there are also several hundred members of this ethnic group living today.

A few communities in the Sierra de Perijá mountain range, which forms part of the border with Colombia, have accepted the demarcation of their lands proposed by the Venezuelan government. But other communities, like Kumanda and Karañakaek, not only refuse to be “fenced in”, but have also settled on tracts of land between cattle ranches as a means of forcing the issue.

Thanks to the Angry Indian for noting the article on his blog.