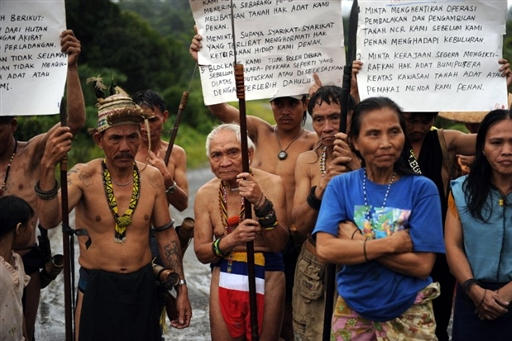 In the month’s Underreported Struggles: Colombia’s most powerful indigenous organization announces a new “Minga of resistance”; The Algonquins of Barriere Lake celebrate mining company’s retreat from their territory; Security guards evict Indigenous families from their land on behalf of Italian businessman.

Cap-Ex Ventures Ltd. (Cap-Ex), a Vancouver-based junior mining company, has decided to proceed with exploration activities in direct violation of agreements made with the Innu of Uashat mak Mani-Utenam (ITUM), who have made considerable efforts to engage with the company and reach an agreement for exploration to proceed on their traditional territory. The company’s irresponsible move, which violates federal law, leaves the Innu little choice but to protest.

In recent months many Bangladeshi indigenous people have taken the streets holding meetings, human chains and rallies, demanding constitutional recognition of their population. The ongoing demand stems from an ‘indigenous’ debate, in which many government representatives have denied that any Indigenous People are in the country. An illuminating talk by a Bengali citizen puts the debate into perspective.

The Ramu landowners in Papua New Guinea were shocked to learn a Judge decided to approve the controversial deep sea waste disposal plan for the Chinese-owned Ramu Nickel mine. The approval came only after the judge acknowledge the risk of irreversible harm to marine resources. The landowners say they are going to appeal against the court decision.

Chile’s Aysén Environmental Review Commission approved the environmental assessment of a five dam proposal on two rivers. The approval, however, is marred in controversy and has set off protests in many cities, including Santiago. Critics say the series of dams will destroy a largely untouched region of Patagonia. Protests hit Coyhaique, the city where the vote occurred, with over 1,000 people marching. Clashes with police resulted in water canons and tear gas being used on protestors. Reportedly protestors were throwing rocks at commissioners’ cars. Dozens were arrested. Similar clashes occurred in Santiago.

The oldest and strongest grassroots indigenous organization in Colombia, The Regional Indigenous Council of Cauca (CRIC), issued a call for a “Minga of resistance” to restore autonomy and peace throughout Indigenous territories in the Colombian state of Cauca. The call for a “Minga”–a term that refers to a traditional gathering or activity for the collective good–arrives just ten days after The Revolutionary Armed Forces of Colombia (FARC) carried out a series of violent attacks in at least 5 indigenous communities.

The Algonquins of Barriere Lake are celebrating a recent decision by Cartier Resources Inc. to suspend its mining exploration activities in the Algonquin community’s traditional territory in northwestern Quebec. The decision sets an important precedent in Canada concerning the Right of Free, Prior and Informed Consent (FPIC) as defined by the United Nations Declaration on the Rights of Indigenous Peoples.

The Committee to Protect Glen Cove announced a major victory in the 98-day struggle to protect the sacred grounds of Sogorea Te/Glen Cove in Vallejo, California. According to a recent press release , the Yocha Dehe and Cortina tribes established a settlement agreement with the City of Vallejo and the Greater Vallejo Recreation District (GVRD). The agreement, which was signed on July 19, guarantees that both tribes will have legal oversight in any future activities taking place within the 15-acre site.

After struggling for more than 30 years to protect the Koongarra region from the threat of uranium mining, Kakadu Traditional owners can breathe a welcomed sigh of relief. The World Heritage Committee recently announced that it would redraw the borders of the Kakadu National Park to include Koongarra.

Security guards working for the Italian businessman, Idolo Augustine Mastronei, violently evicted a group of Bribri families from their territory in the Talamanca region of Costa Rica. The security guards, accompanied by officers of the judiciary, entered the Keköldi Indigenous Reserve to remove the Bribri families, it is said, because they were living on a 50 hectare estate that Mastronei purchased at an auction. Most of the adults were arrested during the eviction, “while the children were threatened at gun point inside their own houses by [the] private security guards.”

All nine Chiefs from Matawa First Nations communities signed a historic declaration, making a commitment to stand together to protect the natural resources and territories of member First Nations. The Mamow-Wecheekapawetahteewiin- “Unity Declaration”, states that the nine Matawa communities agree that they “must stand together in order to ensure our nation is protected. Therefore, we assert our Aboriginal and Treaty Rights to the land, water and resources by requiring our written consent before any development activity may proceed.” The “Unity Declaration” further states that; “Failure to consult, accommodate and receive the consent of the First Nation(s) to proceed with any work or activity is an unjustified infringement upon our Aboriginal, Treaty and Custodial rights as First Nations.”

The Fundación para la Sobrevivencia del Pueblo Cofán (FSC) and its US-based branch The Cofan Survival Fund have launched a new fundraising campaign, “The Campaign for 5000” to support the one-of-a-kind Cofán Ranger Park Guard program. The Cofan Ranger Park Guard Program, created and managed by the indigenous Cofán people of Northern Ecuador, has been responsible for the successful protection of over one million acres of some of the most biodiverse forests in the world.

The Malaysian Oil palm giant Shin Yang has heard the hopes and prayers of six Penan villages in the Malaysian state of Sarawak. Late last year, the six villages were horrified to learn that, not only were they going to be evicted from their land to make way for a hydro dam, but they were also going to be “dumped” in an area that’s being converted into an oil palm plantation. Fortunately, the company voluntarily decided to halt work in the area “pending verification from the authorities” that the land has been designated for the Penan.

A new report by the Washington-based Rights and Resources Initiative (RRI) shows that more and more Asian governments are granting Indigenous Peoples greater control over their natural resources and habitat in a bid to stem deforestation. Countries such as China, India and Vietnam are making “dramatic” progress, not only in stopping deforestation, but also in expanding their forests. Indonesia, however, remains excluded from the promising regional trend, the report said.

A pipeline rupture in Maple Energy’s Oil Block 31-E, 75 miles north of the city of Pucallpa, Peru, spilling crude oil into the Mashiria River, the primary source of drinking water and key fishing ground for the neighboring indigenous Shipibo community of Nuevo Sucre. The local operator for the Dublin incorporated transnational then turned around and hired 32 community members to clean up the spill with rags and buckets without training, protective gear, or information about the health effects of petroleum.

Thousands of Indigenous Colombians have been given voter cards with fake, humiliating names by notaries who decided to “have a little fun” at their expense. With the Indigenous People unable to speak or read Spanish, the officials decided to fill out the voter cards for them, using names like “Tarzan,” “clown,” “pint-size” and “gorilla”. The phenomonan has been captured in the documentary “We were born on December 31st,” which tells the tale of the indigenous Colombians’ treatment by election officials.

Conservation groups reported that one of the world’s largest private equity firms, the Blackstone Group, is pushing for a brand new 72,000 hectare palm oil plantation in the middle of the rainforest. “[It] will be an environmental disaster for the rainforests in Cameroon; even worse than the planned highway through the Serengeti. The oil palm plantation will further fragment this unique landscape, restricting the natural movements of many animal species,” says SAVE in their new facebook campaign “Stop Blackstone Deforestation in Cameroon”.

A group of 18 US and Canadian citizens visited the community of Rigores, Tocoa, Cortes, Honduras to learn about the violent and illegal eviction which had occurred there on June 26. While the group was hearing testimonies about the attack, a group of security forces moved into the community in the style of a military assault, burning houses. Unlike the earlier eviction, the paramilitaries did not carry out any acts of violence, likely because of the presence of the human rights observers.

Aymaras in the Peruvian department of Puno lifted their 45-day strike against the extractive industry after reaching an agreement with the government of Peru over the Canadian-owned Santa Ana mine. According to Walter Aduviri, leader of the Natural Resources Defense Front of the Southern Zone of Puno, the government agreed to suspend the mining companies controversial project.

Village in Chiapas Starved of Medical Services for REDD – In this video, villagers from Amador Hernández, inside the Montes Azules Biosphere Reserve in the Lacandon Jungle of Chiapas, Mexico, describe an ongoing threat to their land as a result of the state government’s pursuit of a climate change policy to “protect” the forest.

The Experimental Eskimos – In the early 1960s the Canadian Government conducted an experiment in social engineering, separating three young Inuit boys from their families in the Arctic and sending them to Ottawa to be educated in white schools. All three grew up to be political activists and leaders in the struggle for indigenous rights in Canada. But it all came at a terrible cost.