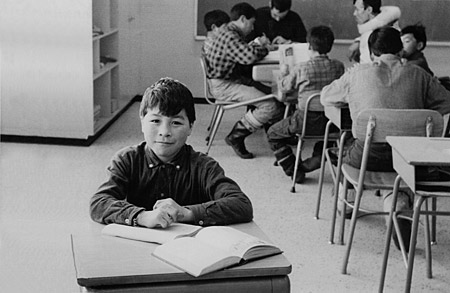 In the early 1960s the Canadian Government conducted an experiment in social engineering, separating three young Inuit boys from their families in the Arctic and sending them to Ottawa to be educated in white schools. All three grew up to be political activists and leaders in the struggle for indigenous rights in Canada. But it all came at a terrible cost.

SYNOPSIS
The Experimental Eskimos documents an extraordinary attempt at social engineering, undertaken by the Canadian government. In 1962 and 1963, three 12-year-old Inuit boys were separated from their families in the Arctic and sent to Ottawa to live with white foster families and be educated in Ottawa public schools.

Federal government officials called the children “an experiment.” The three boys — who had scored very highly on IQ tests — were relocated, it was said, with the tacit approval of their parents and with the best of intentions. The idea was to see how the brightest young Inuit would fare in the competitive white man’s world and to prepare them for leadership positions in their communities. The boys and their families were not aware that they were participants in an attempt to see how easily Inuit children could be assimilated.

The bureaucrats did not anticipate the outcome. All three went on to become activists and leaders of their people and a thorn on the side of the government that had brought them South. Peter Ittinuar of Rankin Inlet was the first Inuk Member of Parliament. Zebedee Nungak of Saputiligait, Quebec became president of the Inuit-owned economic and political organization, Makivik, and Eric Tagoona of Baker Lake was president of the Inuit Tapirisat of Canada — the first Inuit political lobbying organization.

The battles they fought and won were instrumental in the establishment of Aboriginal rights in Canada and led to the creation of Nunavut — the world’s largest self-governing Aboriginal territory. But it all came at a great personal price. They were deprived of their parents, their language, and their culture.

The Experimental Eskimos reunites Peter, Zebedee and Eric to reflect upon the profound impact that this assimilation attempt had on their lives. Directed by Palme d’Or Award-winning filmmaker Barry Greenwald and produced by Emmy Award-winning Peter Raymont, the film features a wealth of forgotten archival footage, family photos and government documents. The Experimental Eskimos is the untold story of how an experiment in social engineering changed not only three boys, but a nation.

For more information or to order a DVD of the film, visit http://www.whitepinepictures.com/all-titles/experimental-eskimos/