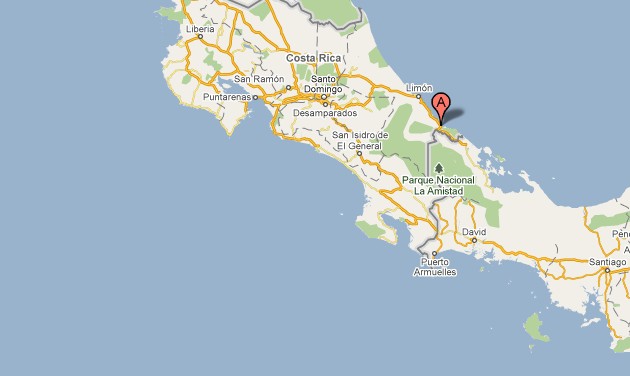 Security guards working for the Italian businessman, Idolo Augustine Mastronei, have violently evicted a group of Bribri families from their territory in the Talamanca region of Costa Rica.

On July 1st, the security guards, accompanied by officers of the judiciary, entered the Keköldi Indigenous Reserve to remove the Bribri families, it is said, because they were living on a 50 hectare estate that Mastronei purchased at an auction.

Most of the adults were arrested during the eviction, “while the children were threatened at gun point inside their own houses by [the] private security guards” reports Real World Radio.

Henry Picado, Real World Radio’s correspondent in Costa Rica and a member of COECOCEIBA (Friends of the Earth Costa Rica) interviewed two of the effected residents. The first resident, Norma Luz Segura Pino, “reported the ill-treatment and the aggressions [they] suffered on the day of the eviction;” while Jaco Mayorga Mora spoke to the issue of the “disputed land.” Mora explained that Mastronei’s purchase was an illegal act because the property is recognized by the Costa Rican government as being a part of the Keköldi Indigenous Reserve.

Saul Yanes, Mastronei’s lawyer asserts that his client purchased the estate two years after the 3,538 hectare reserve was established in 2001. It therefore belongs to Mastronei.

Costa Rica’s National Registry, however, froze the property on October 4 2010 (file registry # 2010-0396) after determining that it “overlaps with the bribri Keköldi Indian Reservation.” Both Mastronei and his lawyer were undoubtedly aware of this when they approached the courts, a move that directly led to the July 1st eviction.

In April of this year, when concerns of an eviction first surfaced, José María Villalta, the deputy for the Frente Amplio party, further pointed that the Keköldi reserve “…is inalienable and no one can appropriate [it] illegally,” Villalta said. According to the 1977 Indigenous Act, all indigenous territories in Costa Rica are protected and may not be diminished except through the adoption of an explicit law.

In 1993, Costa Rica also ratified the International Labour Organization’s (ILO’s) Convention 169. ILO 169 is a binding international law that recognizes indigenous land ownership rights and compels signatories like Costa Rica to consult indigenous peoples in developments that would effect them.

“The Costa Rican government boasts about its defense of human rights, but it systematically violates [ILO 169], which recognizes the indigenous right of territorial autonomy, as exposed by the residents of Kekôldi community,” notes Real World Radio.

As a precautionary measure, the nearly 10 Bribri families, who were clearly unlawfully removed their lands, are now forbidden to return home or tend to their harvest.

Please take a moment to send a message to Costa Rica’s President, Laura Chinchilla, asking her to intervene on behalf of the Bri Bri: to ensure their safety as well as their right to return home and to be protected from another eviction. Two important points to highlight:

1) Under the Indigenous Act of 1977, indigenous land in Costa Rica is considered to be inalienable (except under extreme circumstances). This includes the disputed land that Idolo Mastronei claims to be his private property.

2) Under ILO Convention 169, the government is required to establish a consultation process before indigenous lands may be used by non-indigenous people.

It may also be worth noting that, in principle, the establishment of the Keköldi Indigenous Reserve nullified Mastronei’s land claim.

That said, the most appropriate course of action would seem to be for the government to negotiate a settlement with Mastronei on behalf of the Bri Bri, providing the Bri Bri agree to it.