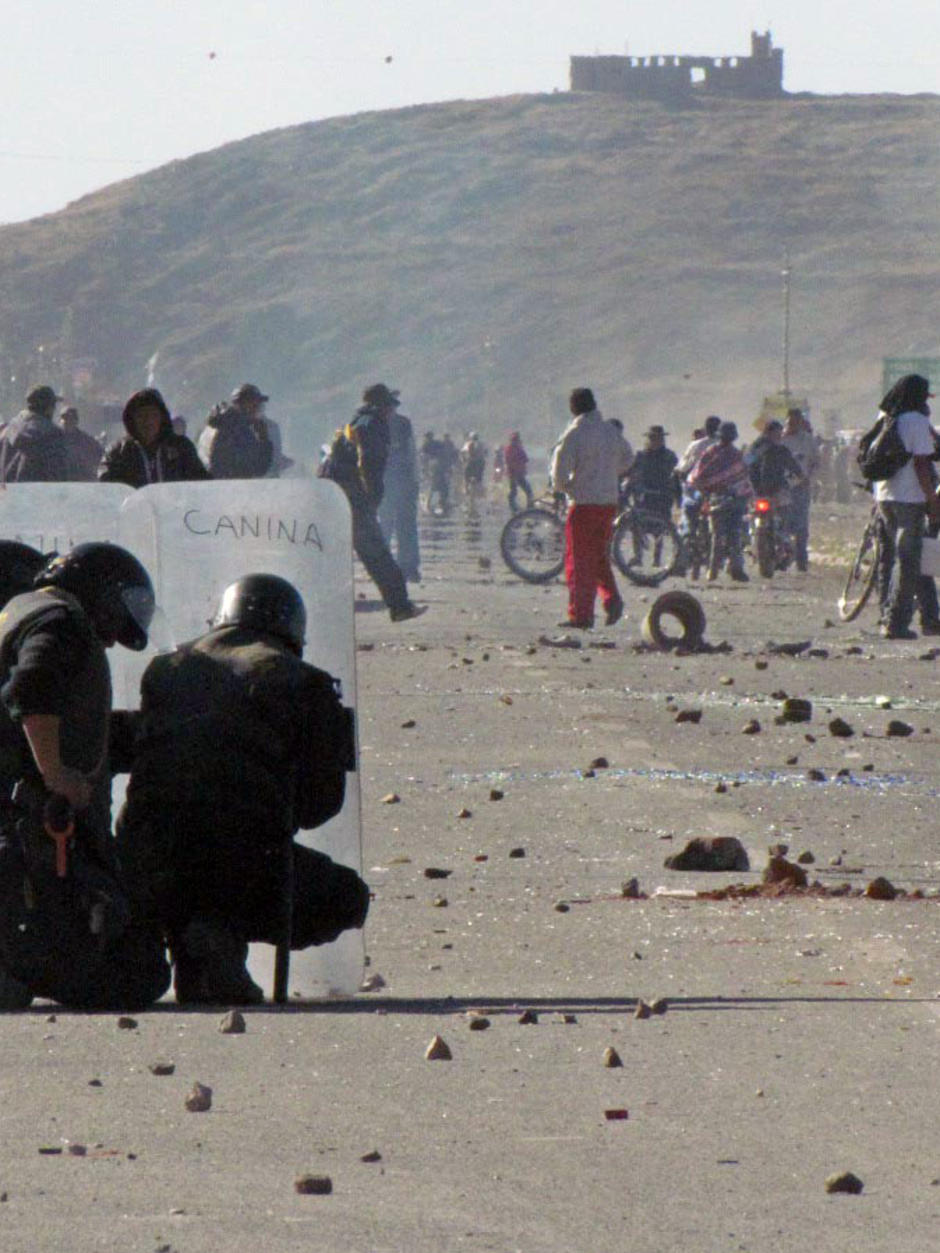 Peru: Another victory for Indigenous Peoples against bad industry and government

Aymaras in the Peruvian department of Puno have lifted their 45-day strike against the extractive industry after reaching an accord with the government of Peru over the Canadian-owned Santa Ana mine.

Walter Aduviri, leader of the Natural Resources Defense Front of the Southern Zone of Puno, announced a formal end to the civil strike this week, in his address to some 20,000 Aymaras who had gathered in the town of Desaguadero.

“Aduviri said the decision was taken after consultation with the Front’s base communities along the shores of Lake Titicaca. In his address, he detailed accords reached in recent negotiations with the government in Lima for the suspension of [the] controversial mining concession in Puno,” notes the WW4Report.

During 5-week campaign against the mine, the Aymaras extended their position to include all mining and oil exploitation in Puno for being such environmentally-destructive activities. They also came to include the risky Inambari hydro-electric project.

The Aymaras didn’t get everything were seeking; but it was nonetheless another welcomed victory for Indigenous Peoples.

There has been, however, a march larger strike taking place behind the Aymara-led campaign–something, observes the WW4 Report, which has “considerably garbled” media reports on recent events in Peru.

Most significantly, the recent attempt to occupy the Manco Capac airport in Juliaca so widely attributed as an Aymara-led effort, had little to do with the Aymara or the Santa Ana mine.

Rather, the takeover was led by Quechuas who are desperately trying to get the government to clean up the Ramis river which is being fed mercury waste from the La Rinconada gold mine. So far, the government has refused to take action to clean the river. (NB: As if the mercury problem wasn’t enough, the La Rinconada mine is allegedly being operated by “criminal cartels” who employ a child labour force.)

Speaking about the “tangled media reports“, Carwil without Borders explains,

The Defense Front, a predominantly Aymara organization, is based near the border and had organized an earlier regional general strike against the Santa Ana Mine in April. It joined forces with the largely Quechua Conami for a larger regional protest from May 7 to June 1. When protests resumed after the victory of Ollanta Humala, new forces got involved, many but not all also concerned with mining elsewhere in the Puno Region. These include protests in Carabaya province [the Puno region has 13 provinces, divided in 107 districts] against mining concessions and the Inambari hydroelectric power plant; protests in Melgar, Juli, and Sandia over local mines; and Azángaro (whose capital is Juliaca) demanding decontamination of the Ramis river from pollution caused by small-scale mining. Outside of the Defense Front, most peasants in these regions are Quechua-speakers, not Aymaras.

The corporate media may have got it wrong; fortunately, the independent media didn’t make the same mistake. Reports on Allvoices, Global Voices Online and of course the WW4 Report, were as accurate as could be. It’s a hopeful sign, given the corporate media’s “broken record” of exclusion and bias when it comes to Indigenous Peoples.

In any case, the real story here is about the Indigenous Peoples of Peru. Despite having to deal with (soon-to-be ex-president) Garcia, the most openly-racist head of state in the world, the Aymaras, Quechuas, the Awajun and Wampis, the entire Indigenous population, has made enormous strides against “bad industry” and “bad government.”

With so much at stake now, thanks to Garcia’s myopic vision, you can be sure they’ll make even more, in stride with all other Indigenous Peoples around the world who are doing the very same work for the very same reasons.