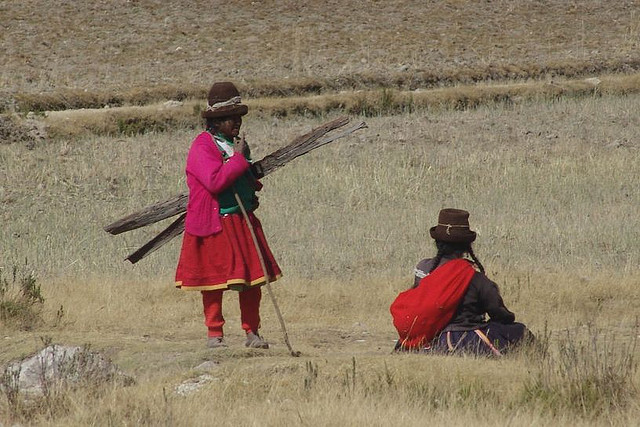 Photo by Jungle_Boy, on Flickr
Support our journalism. Become a Patron!

About 100 indigenous people staged a protest in front of Taiwan’s Presidential Office to demand an apology, a treaty and the return of ancestral lands. Elders at the protest were eventually invited to sit down and talk with representatives; however, it was ultimately fruitless. The Elders later described the talk as “even worse than written correspondence”.

Indigenous People in West Papua are angry over the timid sentences handed to three Indonesian soldiers responsible for torturing two West Papuans in 2010. “The soldiers received between eight and 10 months jail for ‘insubordination’ rather than the more serious charge of torture,” notes the Green Left. The soldiers will also be allowed to continue their military careers. One of the soldiers used a mobile phone to record the two West Papuan men being tortured and humiliated.

UNESCSO was singled out for its lack of interest in protecting the Philippines Island Province of Palawan. The UN organization declared the island a Man and Biosphere Reserve in 1990; however, today, there is a concerted effort to hand it over to mining interests–putting at risk the island’s delicate ecosystem, several endangered species and the local indigenous population.

Q’eqchi Maya communities in Alta Verapaz, Guatemala are being targeted as a part of a new government scheme to “alter” the region’s social fabric. Since the government declared martial law in Alta Verapaz–ostensibly, to deal with drug trafficking–at least three Q’eqchi communities have been confronted by military forces as well as landowners and international corporations who appear to be taking advantage of the so-called “state of siege.”

A South Australian court slammed the door on a massive copper-gold exploration project on the Kokatha’s ancestral lands. In its judgment, the court stated that the Kokatha’s rights as well as the significance of the area and their longstanding and consistent opposition to mining, ultimately outweighed the potential value of the project. The ruling is a major victory for the Kokatha, who have been struggling to secure their land rights for more than 20 years.

The Association of Indigenous Councils in North Cauca (ACIN) has instituted its own re-immersion program for demobilized guerillas. Working in conjunction with the Colombian government’s own rehabilitation program, so far ACIN as helped to re-integrate at least 48 former guerrilla fighters of indigenous origin.

Ngobe protesters streamed into Panama’s capital city and blocked the street in front of the Legislative Palace to protest their exclusion from an important committee hearing. Panama’s National Assembly president had invited several environment critics to take part in the hearing to discuss proposed changes to the country’s Mining Code. However, he did not invite any indigenous representatives. The Ngobe believe they should have been invited in part because of mining projects that threaten their lands.

Botswana’s Court of Appeal reversed a 2010 High Court ruling that denied the Kgeikani Kweni (San) access to water on their ancestral lands. Celebrating after the decision, a San spokesman said, “We are very happy that our rights have finally been recognized. We have been waiting a long time for this. Like any human beings, we need water to live. We also need our land. We pray that the government will now treat us with the respect we deserve.”

Rapanui activists turned to the United Nations for help in their ongoing struggle for land rights on the Island of Rapa Nui (Easter Island). Despite numerous calls for peaceful resolution, the Chilean government has continued to violently repress the Rapanui who are attempting to reclaim ancestral lands. The government claims that it’s only trying to uphold the rule of law.

The Sinixt Nation–still considered extinct by the Canadian government–was back in court over the injuction they won during their three-week anti-logging blockade in October 2010. The Sinixt are arguing that logging should not be allowed to take place in the area known as Perry Ridge because it is home to archaeological sites and the only pristine wilderness left within their ancestral territory.

FUNAI, Brazil’s department of Indigenous Affairs, issued an order restricting entry to lands near the site of the planned Belo Monte hydro project, following indications that Isolated Peoples are living there. However, despite the restriction, FUNAI decided to gave its approval for the controversial dam project. If the dam is completed, the isolated peoples would be displaced.

A representative of the London-based PR firm Euro RSCG London appears to have been caught “red-handed” stating that his company is willing to assist in the relocation of Isolated Peoples in Bolivia to make way for an open cast lithium mine. The revelation sheds even more light on the corporate climate movement’s “lack of integrity”.

The Ogoni called on Nigeria’s National Assembly to “immediately expel” Shell Oil from the country, citing a long list of offences including “murder, conspiracy to commit murder, bribery and racketeering, tax evasion” and “distribution of arms”. They also called on the United Nations to re-visit Shell’s role in the death of Ogonis and patrons, Ken Saro Wiwa and eight others.

Indigenous communities in Sarawak began setting up blockades against an oil palm company for failing to keep its promises. Throughout the month, three separate blockades were erected by two neighbouring communities. Several more blockades are expected to follow in the coming weeks.

Oil drilling was temporarily suspended near Bear Butte to give the South Dakota State Historical Society time to review the potential impacts on the national historic landmark. The state of South Dakota shamelessly approved the project in December, putting at risk a major site of ceremony and worship for more than a dozen Indigenous Nations including the Cheyenne, Lakota, Dakota and the Arapahoe.

Toxic Neglect – A shocking story that the Uranium Corporation of India Limited (UCIL) and the Government of India doesn’t want you to know about.

Songs of the Colorado – The story of the traditional songs of the Yuman-speaking people and how those songs connect them, through story, language and history.

Land Has Breath: Respecting Nature in Altai – Land has breath, an umbilical cord, nose, mouth eyes and ears… everything that exists on earth is alive. Altai is a harmonious co-existence of humanity and nature.