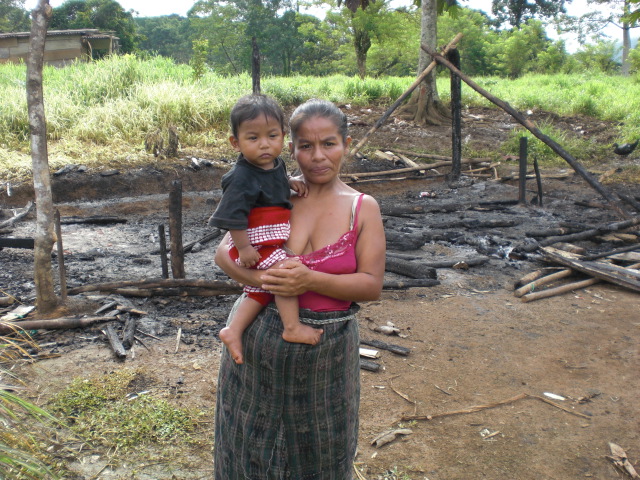 End the State of Siege in Alta Verapaz, Guatemala

Jorge Armando Lopez Cuc, Nine Months Old, was Asleep in his Parents House when it was Set on Fire. Photo Guatemala Solidarity Project.
Support our journalism. Become a Patron!

On December 19, 2010, Guatemalan President Alvaro Colom declared a State of Siege in the department of Alta Verapaz under the pretence of fighting drug traffickers.

Officials claim that, since Mexico increased its own “war on drugs”, the hardline organization known as “Los Zetas” has moved its operation from Mexico to Alta Verapaz which is located in north central Guatemala. Los Zetas is now allegedly in control of much of the region.

Since the siege began, notes Al Jazeera, “Police have arrested at least 22 ‘traffickers’ and confiscated five small planes, 239 assault weapons, 28 vehicles and explosives in a series of raids.” However, with the suspension of basic human rights in Alta Verapaz–and the extensive powers given to the police and military–drug traffickers aren’t the only ones being targeted.

According to Coordinadora Nacional Indigena Y Campesina (CONIC), the Q’eqchi Maya community of Se’ Job’ Che’–which has absolutely no connection to drug trafficking–was raided on January 10, 2011. The community fled the area when the soldiers arrived; and when they returned, their food crops and property had been destroyed.

On Monday, January 10, 2011 at 10:00 am, 40 soldiers, 2 members of the National Civilian Police, and 20 park rangers [INAB guardarecursos] entered the area where the community tends their cardamom, corn, and bean crops. Without engaging in any dialogue, the military troops began shooting their weapons, and the campesinos had to run and hide away from the crop area. The military then began to destroy the community’s crops, cutting 300 cuerdas of cardamom [around 15 hectares], 300 cuerdas of beans, and 50 cuerdas of corn.

Héctor Arnulfo Ruiz, who was present as a representative of the FONTIERRAS government land institution, assaulted and attempted to rape Mrs. Adelina Yaxcal as she was hiding among the cardamom crops, ripping her traditional güipil blouse in the process. Fermín Ayala, head of the National Forestry Institute (INAB) park rangers, attempted to bribe various community members, offering to spare their crops in exchange for Q50,000 [over $6,000].

The families were able to reunite in the afternoon, and then realized that during the raid they had lost 20 turkeys and 20 chickens, as well as other personal property such as work tools. By 5:00 pm that day rumors were circulating that the same actions were to be carried out in other Indigenous communities.

According to the Guatemala Solidarity Project (GSP), wealthy landowners and international corporations have also been taking advantage of the ongoing military offensive to do a little “land clearing” of their own.

On January 20, 2011, the community of Saquimo Setano was violently attacked by the family of wealthy landowners Benjamin Soto and his wife Maria Elena Garcia Ical. This family has violently attacked numerous unarmed peasants, burned houses with children inside, and attacked and threatened US citizens. Numerous complaints have been filed, but the only response by the authorities has been to threaten community leaders and US volunteers who are working with them.

Since the attack on January 20, GSP has been unable to reestablish communication with the community. GSP is now urging immediate action in solidarity with the Mayan community (see below).

The community has faced numerous attacks from wealthy landowners Benjamin Soto and his wife Maria Elena Garcia Ical, who are attempting to steal the community’s land. Between August 31 and September 2, 2010, the landowners led attacks against the community during which houses were burned down, death threats were made and dogs, horses and guns were used to terrorize families. The government has refused to arrest Soto and Elena Garcia for the attacks, and has instead moved forward with fraudulent charges against community leaders and GSP activists.

Though details are scarce, GSP says that the indigenous community of Miralvalle was also attacked “by the private security force of a biodiesel company financed by the US government.”

Guatemalan Human Rights Leaders have been speaking out against the siege since it was declared On Dec. 19.

Indigenous Community Leaders have also been speaking out; however, so far their voices have been ignored.

While attacks against indigenous communities in Alta Verapaz have been going on for quite some time, the latest attacks by the police and military appear to be part of an effort to ‘change the region’s social fabric’.

Just prior to the Jan. 10 attack, Carlos Menocal, Guatemala’s Minister of the Interior, stated that U.S. officials would be travelling to the region along with Colombian Vice Minister of Defense, “to kick off the new phase” in Alta Verapaz. “According to Menocal, US officials will support a new ‘model police precinct’ in its efforts to ‘reconstruct the social fabric'”, notes a Jan. 9 statement by GSP.

Following this, on Jan. 20–the same day that the community of Saquimo Setano was attacked–President Colom announced that the siege would be extended for another month.

1. Email and/or fax the office of President Alvaro Colom and demand an end to the repression
Email: cartapresidente@scspr.gob.gt Fax: 502-2251-4144

2 Call or write members of Congress asking them to oppose the state of siege and denounce the continued government repression of the peasant movement in Alta Verapaz. If you send an email, please cc: us at solidaridadguatemala@yahoo.com so that we can follow up on their actions. Below is a sample letter

3. Send a financial contribution to communities facing eviction. Checks should be made out to “UPAVIM Community Development Foundation” and mailed to UPAVIM, c/o Laurie Levinger, 28 McKenna Rd, Norwich, VT 05055. Write the word “evictions” in the notes/memo of your check, and all funds will go to communities facing eviction. Or donate via paypal at http://upavim.pursuantgroup.net/english/donate.htm, you will see the paypal link, and you must include the words “GSP evictions” in a note to ensure the funding is delivered correctly. The GSP will take no percentage of such donations.

I am writing to ask you to call for an end to the state of siege declared on December 19, 2010, in Alta Verapaz, Guatemala, and the continued repression of indigenous leaders in the region. According to Guatemala’s Minister of the Interior, Carlos Menocal, US officials will be accompanying police and soldiers in the region to begin what he calls the “second phase” of the siege. In addition, many of the police and military officials leading the siege have been trained and equipped by the US government.

I am very concerned about the immediate physical safety of peasant leaders who continue to be targeted by the police and military, including Pablo Sacrab Pop who was arrested on December 28, 2010, despite committing no crime. I am also very worried about human rights violations by the company Chabil Utzaj, which has received US government funds and has organized violent attacks against Q’eqchi families in Alta Verapaz. Please contact the US Embassy in Guatemala at your earliest convenience and ask them to intervene with the company to prevent them from continuing such attacks.