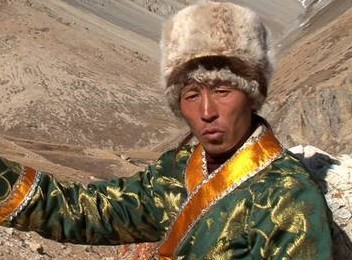 Land has breath, an umbilical cord, nose, mouth eyes and ears… everything that exists on earth is alive. Altai is a harmonious co-existence of humanity and nature.

“Nature is greatly changing. Our summertime comes one month later. It doesn’t rain. The earth is being exhausted,” Cheltuev says.

Altaian myths and spiritual beliefs had long ensured that animals, plants, water and even the land and rocks received respect. As his community pursues new livestock raising practices, Cheltuev laments the changes in human behaviour and the loss of age-old wisdom. He calls for the return to a respectful and harmonious relationship with the local environment and is there to guide the folk on their rediscovery of this heritage.

“This is an ignorant generation, people don’t understand each other. By teaching our children and restraining ourselves… then destructive practices will stop,” he explains.

His message appeals not only to the people of Altai, but to the whole world:

Land Has Breath was produced by the United Nations University Media Studio’s Citt Williams in association with the Foundation for Sustainable Development of Altai and The Christensen Fund.

The video and accompanying text have been licensed by the United Nations University under a Creative Commons Attribution-Noncommercial-Share Alike 3.0 License.