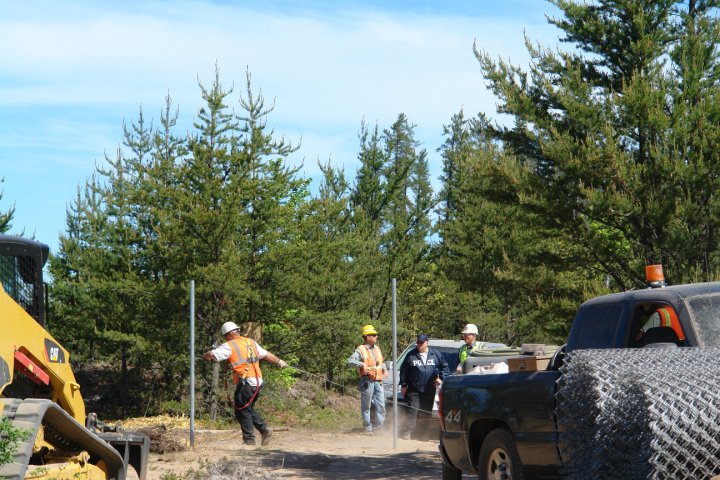 Kennecott employees placing a fence across the driveway to the Eagle Rock encampment which had just been demolished. Photo by Greg Peterson
Support our journalism. Become a Patron!

50,000 protest against Arizona’s “anti-immigration” law – An estimated 50,000 people showed up on Saturday for the National Day of Action against SB-1070 in Phoenix, Arizona. The protest took place just days after the Border Patrol Headquarters in Tucson was occupied by Indigenous People and non-native supporters. Meanwhile, the blatantly racist law begins to catch on in 10 other states.

Hundreds Gather in Northern B.C. Against Enbridge Oil Tanker Plan – More than 500 Indigenous People gathered in Kitamaat Village this week to oppose the Northern Gateway Pipeline, a controversial project that would transport oil from the Alberta Tar sands to the deep sea port in Kitamaat. The gathering was held two days after Enbridge filed its application for the project.

Eagle Rock Defenders camp ‘crushed’ by Police – Dozens of heavily armed Police and State Troopers have raided the peaceful defenders camp at Eagle Rock in Michigan’s Upper Peninsula; “crushing” the month-long effort to protect the site from a controversial sulfide mine. Immediately following the raid, the mining company Kennecott swiftly moved in, demolished the camp and set up a fence around Eagle Rock.

Peasants of Haiti demonstrate against Monsanto’s “humanitarian help” – Monsanto corporation and the US embassy in Haiti decided to donate nearly 475 tons of GM corn to small farmers of the island, with the excuse of helping in the national reconstruction after the earthquake of January 12. The joint measure caused the anger of the Haitian peasants, who are calling a national demonstration against it next June 5.

Dump site 41 is gone forever – Site 41, the controversial landfill in southern Ontario is finally gone for good. The Simcoe County Council has voted to rezone the site as agricultural land with a covenant that no garbage will be dumped, sorted or treated at the site in the future. The welcomed decision, which guarantees the safety of the Alliston aquifer, marks the end of a 15-year struggle by farmers, activists, local residents and indigenous people to “Protect the Water.”

Brazil: Kayapo blockade heads into second month – It’s been exactly one month to the day since a group of Kayapo set up a ferry blockade across the Xingu River in an ongoing protest against the controversial Belo Monte hydro dam. The Kayapo were dispatched to the site on April 22, the same day Brazil’s government granted rights to a consortium to proceed with the dam

Permanent Peoples’ Tribunal condemns EU for complicity in social and ecological crimes throughout Latin America – The Jury of the Permanent Peoples’ Tribunal of Madrid has issued their ruling over the 27 corporations (PDF) accused of human rights and environmental abuses in Latin America. Finding the corporations “Guilty”, the ruling highlights the EU’s role in permitting what they termed “a regime of generalized permissiveness, illegality and impunity.. in Latin America”.

Mexico: Supreme Court Issues Landmark ruling on Indigenous Rights – In a landmark decision, Mexico’s high court has ruled that the government overstepped its bounds by imprisoning two Otomí women on trumped-up kidnapping charges. The decision, which resulted in the immediate release of the two indigenous women from a federal prison, creates a precedent that allows human rights advocates to use the courts to challenge what they believe is government impunity.

India: Aftermath of police attack on Anti-POSCO villages – The situation in the three villages of Dhinkia, Gobindapur and Nuagaon is grim. Three days after the 15th May assault by police forces on the peaceful assembly of villagers in Orissa, nearly every household in these three villages have people who are injured and traumatized. All exit points from the villages have also been sealed by the police, forcing the villagers, even those “with festering wounds and fractured limbs… including the elderly” to suffer their ordeal silently in the confines of their homes.

Thousands of Tibetans mobilize to defend Sacred Mountains – A massive police crackdown may be imminent in the Tibetan Autonomous Region (TAR), where thousands of Tibetan villagers have mobilized to defend their sacred mountains from mining exploitation. As many as five thousand Chinese troops have been called in to make sure the mining operations proceed.

Oaxaca: The Ongoing Extermination of San Juan Copala’s Autonomous Triquis – Twelve people were kidnapped and disappeared in San Juan Copala on May 16, following the ambush of a caravan on April 27, 2010 in which two human rights activists were murdered by Unión de Bienestar de la Región Triqui (Ubisort) paramilitaries. The twelve disappeared are women and children. The kidnapping appeared to be a reprisal for the call to send a second, international and larger caravan to San Juan Copala, scheduled for June 8. At the close of Sunday May 16, late information was received that all the women and children had been freed. Nevertheless the denunciation of their disappearance was published to illustrate the contempt the state government and the State Commission for Human Rights hold for the Triquis.

“Scare the uncontacted tribes or tell them to go home,” advises Perenco – Oil company Perenco has released a plan revealing how its workers would react if they meet any voluntarily isolated Indigenous Peoples in Peru. Perenco, chaired by one of France’s wealthiest men, is hoping to build a pipeline into one of the remotest parts of the Peruvian Amazon.

Ecuador: armed attack on Amazon indigenous community – On April 29, a group of indigenous Kichwa men from the community of Sarayaku in the Ecuadoran Amazon were attacked with dynamite and firearms by invaders illegally encroaching on indigenous lands. The assailants fired at point-blank range as the Kichwa men were drinking chicha on a jungle trail, and three Kichwa were injured. In the end, they had to be carried through the jungle for 14 hours to the airstrip in Sarayaku, and were then taken to hospital in the town of Puyo by medevac plane.

Indigenous leaders call for crackdown on Canadian mining companies abroad – Indigenous leaders from Papua New Guinea came to Parliament Hill today to urge MPs to support legislation to clamp down on the practices of Canadian mining firms operating in the developing world.The members of the Ipili tribe have been asking Barrick Gold Corp. to address allegations of human rights abuses and environmental degradation at the Barrick-controlled Porgera gold mine. But Toronto-based Barrick has denied allegations of human rights abuses, saying such violations are not tolerated at the Porgera mine.

Kichwas Preparing to Defend Their Land Against Canadian Drilling – At an historic assembly in Ecuador two weeks ago, roughly 1000 Kichwas “overwhelmingly” agreed to mobilize against the Calgary-based oil company Ivanhoe Energy. Prior to the assembly, Ecuador gave the Canadian company drilling rights on the Kichwa’s traditional territory within the UNESCO Sumaco Biosphere Reserve.

Barrick Gold gets court go-ahead on Cortez Hills – In Dec. 2009, the Western Shoshone won a key legal victory over the expansion of Barrick Gold’s key Cortez gold mine in Nevada. Unfortunately, that victory has been hollowed out by a U.S. district court, which ruled that Barrick can continue its operations unabated..

Lakotas Prevent Blackhawk Helicopters from Landing at Wounded Knee – Military helicopters approaching from the North could be seen by a crowd of 60 or so Lakota people, gathered at the base of the hill where victims of the 1890 Wounded Knee Massacre lay buried in a mass grave. As the three black helicopters passed overhead and started to turn around, “Block the helicopters!” could be heard faintly, drowned out by the sound of thumping chopper blades and the harsh wind, words shouted by a grandmother. The people began to run toward the helicopters, which were nearing the mass grave.