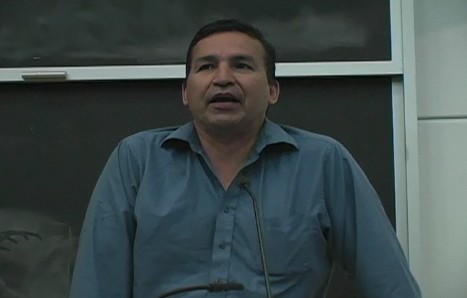 Mining (in)justice: at home and abroad

The three-day event, held during “shareholder’s season” in Toronto, featured more than two dozen panels by activists, educators, community leaders and others involved in their own struggles against Canadian mining companies.

Among these many speakers, Nak’azdli First Nation Councilor Peter Erickson took some time to talk about his Nation’s experiences in north-central British Colombia.

A Hereditary Chief of the Carrier Sekani Nation, Peter, who also goes by the name TsohDih, was himself involved in the fight against Northgate Minerals’ Kemess North mining project in Amazay lake.

Kemess North has been put on hold for now, but there is another mining company trying to have its own way with Nak’azdli land: Terrane Minerals. TsohDih is among those trying to stop the company’s gold mine project near Shus Nadloh (Mt. Milligan).

The Nak’azdli are also involved in the massive push against the Enbridge Northern gateway pipeline project.

Stretching 1,170 kilometres from the Alberta Tar sands to a deepsea port in Kitimat, B.C–the Enbridge pipeline would cut through several indigenous territories, and endanger more than 1,000 rivers and streams, not to mention the delicate ecosystems of the west coast. More than a dozen First Nations, including the Nak’azdli, have formally rejected the pipeline, labelling it a threat to their cultures and ways of life.

While Peter only had the time to Scratch the surface of these issues, he also talked about his own personal history with mining companies, including the untimely passing of his mother, who had in her one of the highest levels of mercury ever found in Canada.

If you would like to see other panels from the conference, please visit: http://mininginjustice.blip.tv/