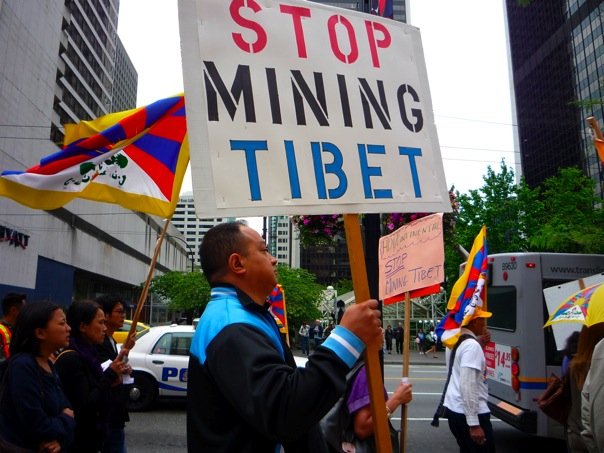 A massive police crackdown may be imminent in the Tibetan Autonomous Region (TAR), where thousands of Tibetan villagers have mobilized to defend their sacred mountains from exploitation.

According to reports from Radio Free Asia (RFA), the villagers are attempting to halt three separate gold mines in Tsongshen, Choeten, and Deshoe in Markham county, TAR.

As many as five thousand Chinese troops have been called in to make sure the mining operations proceed.

A local Tibetan source, who spoke to RFA on condition of anonymity, says at least five protesters have already been injured in the protests, while numerous others have been beaten and tear-gassed by the troops. One also “attempted to kill himself with a broken bottle, the source said.”

Almost exactly one year ago, the same Tibetan villagers organized an indefinite roadblock to protect one of their sacred mountains, known locally as “Ser Ngul Lo.”

Translated into English as “Year of Gold and Silver”, Ser Ngul Lo has been worshipped by the Tibetans for centuries and it is the site of important ceremonies conducted in times of drought.

Government officials at the time granted a Chinese company permission to operate a gold mine in the region–most certainly, without consulting the Tibetans or gaining their consent.

In addition to protecting the Mountain, the villagers were also deeply concerned that their drinking water would be contaminated by the mine. And with a tense stand-off that ensued, the peaceful villagers declared that they were “ready to die” to protect the sacred site. The Tibetans feared the worst.

But then, as the international community watched on, the unimaginable happened: Government officials sat down with the Tibetans and reached a peaceful accord.

For their part, the officials agreed to completely abandon the gold mine and withdraw all troops in the area. In addition, they agreed to build a concrete barrier to stop any old mining waste from leaching into the local water system.

In return, the Tibetans agreed to end their 24-hour blockade and return home.

Please contact China’s Permanent Representative to the United Nations, Li Baodong, calling on the Chinese government to maintain their agreement with the Tibetan villagers by immediately withdrawing their police forces and protect the Tibetan’s sacred Mountains.

SAMPLE LETTER, originally authored by Students for a Free Tibet

I am gravely concerned about reports that Chinese armed security forces have been deployed to stop peaceful protests by Tibetans in Markham County in the Chamdo prefecture (TAR) of western China.

Local sources report that thousands of Tibetans are protesting at three mining operations at Tsongshen, Choeten, and Deshoe in Markham Conuty. They also say thousands of troops have been called in to the area, and that TAR Party Secretary Zhang Qingli has told the troops to make sure the mining operations can proceed, even if it means using force against the protesters.

In 2009, Chinese officials authorized Zhongkai Co, a Chinese mining and lumber company, to conduct mining operations at the Tibetan sacred Mountain, Ser Ngul Lo. After a prolonged standoff, the officials came to an agreement with the villagers to cease the mining operation and to withdraw all troops from the region. The officials also agreed to build a concrete barrier to stop any poisonous waste from previous mining in the area to ensure it could not contaminate the villager’s drinking water in the future.

Crediting the Chinese government for its role, the accord was heralded as a major victory for human rights by the international community

I call on the Chinese government to uphold this important agreement, to withdraw its security forces from Markham and to negotiate with local Tibetans an end to all mining operations at Tsongshen, Choeten, and Deshoe